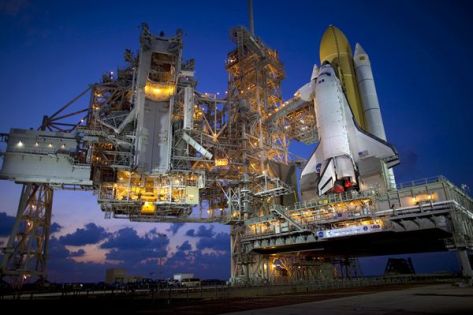 JUST IN: NASA decided to postpone the launch of Discovery until at least Nov. 30. The space shuttle was to leave for his last trip tonight. Technical problems led to repeated postponements of three launch.

Just like a veteran actor after almost 30 years worth of risky performances, NASA’s oldest space shuttle, the Discovery, seems to be having the jitters about taking off one last time. The Florida weather was said to be the latest culprit for the delay. But there were gas leaks earlier in the week, an electrical glitch of some kind the other day and heaven knows what else. That’s why those close to the bird are fooled by none of it.
For them, it’s just the natural anxiety that comes from having to

Also read:
Back for Good
Up, Up and Away
Final Shuttle

perform a difficult task one last time, after so many years of a flawless record. After all, the Discovery is the fleet’s busiest shuttle, with 38 missions since 1984. After she retires, the whole program has only one or two possible missions before it folds for good next year, leaving no replacement.
That big, creaky Russian cigar, the Soyuz, will be covering the route between earth and its near outer space for now, including visitation rights to the International Space Station and even the Hubble, if necessary. It did just that a few times, but it was the Discovery and her dead or already retired sisters that dutifully serviced the ISS for most of its 10 years aloft.
NASA is hoping for a liftoff sometime before Sunday; after that, astronomical conditions will force a postponement of the flight to early December. It’s all because this time, more than ever, no one – not the six astronauts nor its first time fellow traveler, the Robonaut -, wants anything but the most perfect conditions for launch.
Cake and champagne will be waiting for the Discovery after it spends 11 days or so parked at the space station. Also expected are tears and emotions running high, when it lands for the last time to be decommissioned. Since it’s no longer certain that the Smithsonian will be able to display it, museums around the country, including the Intrepid of New York, are in contention to become its final destination.
In any event, the flying bus that launched the Hubble, was once piloted by the first female shuttle pilot Eillen Collins and carried the then 77 years old John Glenn to become the oldest human in space so far, is closing a storied chapter in the human flight book. And is not about to rush things through.
So let the old dame take her sweet time staring at the open fall sky as if reminiscing about the past, the loss of her two sisters, and the era of affordable space flight that was supposed to be dawning just about now. No one seriously doubts that she won’t be delivering it this time. She just needs some time to collect herself, before that gigantic lighter ignites the early Canaveral evening and shakes the ground with thunder. No matter what, she will definitely take off and fulfill her destiny.