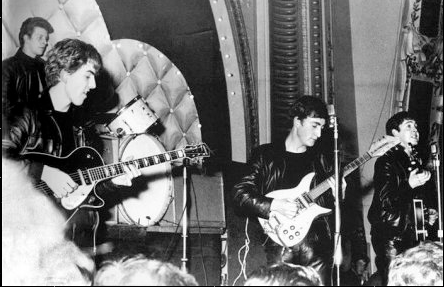 Beatles Hit Their
Half Century Mark

It was 50 years ago yesterday. The Beatles played their first concert at the Indra Club, Hamburg, West Germany. The scruffy lineup included John, Paul, George, soon-to-be-replaced-by-Ringo Pete Best, and the late Stuart Sutcliffe.
Paraphrasing Lennon, the Beatles were born in Liverpool but grew up in Hamburg. For that first paid gig, and the almost 300 that followed in the city over two years, prostitutes and sailors were their primary audience, and concerts could last up to 12 hours, fueled by their legendary drive to succeed and, yes, lots of uppers.
In that black & white world, they were only one outfit among many, striving to make a mark and escape their working class trappings. Their struggle for success is littered with heartbreak and unfulfilled expectations, despite the joy their music brought to the world.
Even before their fame extrapolated England, at least half of those they captivated in the beginning already despised what they’d become. They couldn’t possibly help it, though.
As the arch of their trajectory was completed, less than 10 years later, it became clear that the sum was way bigger than its component parts. Individually they were extraordinary artists, who achieved more than most. But as The Beatles, they were, of course, unsurpassed.
The Indra was not the beginning per se, not even the Cavern that came before and after. But nothing that followed that first foreign gig would’ve ever happened, if that night somehow had gone astray. As to what would’ve happened to John, Paul, George and Ringo if it hadn’t been for the greatest creation, all bets are forever off.
About the Beatles, two of them are already dead, the other two are aging right in front of our eyes. We’re mostly way pass our prime ourselves. But their music remains as fresh as it probably sounded that August 17, 1960, in divided Germany. And we’re just so glad they did as much.