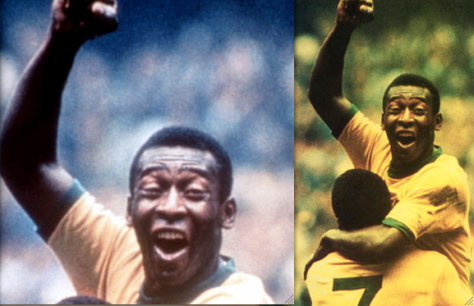 – What some who saw him play have said about Edson Arantes do Nascimento, a.k.a. Pelé, the world’s greatest soccer player:

“In the 1960s and 70s, no one did more for Brazil’s ‘happy’ image than Pelé.” Brazilian songwriter Gilberto Gil

“I told myself before the game, ‘he’s made of skin and bones just like everyone else’. But I was wrong.” Tarcisio Burgnich, Italian defender who marked Pelé in the 1970 World Cup Final

“The greatest player in history was Di Stefano. I refuse to classify Pelé as a player. He was above that.” Hungarian player Ferenc Puskas

“In some countries they wanted to touch him, in some they wanted to kiss him. In others they even kissed the ground he walked on. I thought it was beautiful, just beautiful.” Brazilian player Clodoaldo

“After the fifth goal, even I wanted to cheer for him.” Swedish player Sigge Parling on the 5×2 loss to Brazil at the World Cup Final in Stockholm

“I arrived hoping to stop a great man, but I went away convinced I had been undone by someone who was not born on the same planet as the rest of us.” Portugal’s Benfica player Costa Pereira on 5×2 loss to Santos in the 1962 Intercontinental Cup in Lisbon

“Pelé was the greatest – he was simply flawless. And off the pitch he is always smiling and upbeat. You never see him bad-tempered. He loves being Pelé.” Brazilian player Tostao

“When I saw Pelé play, it made me feel I should hang up my boots.” French player Just Fontaine

“You may be right. But you know nothing about football and I’ve seen Pelé play.” Brazilian coach Vicente Feola to team psychologist who said Pelé was too immature to play at Sweden 1958

“Pelé was the only footballer who surpassed the boundaries of logic.” Dutch player Johan Cruyff

“His great secret was improvisation. Those things he did were in one moment. He had an extraordinary perception of the game.” Brazilian player Carlos Alberto Torres

“I sometimes feel as though football was invented for this magical player.” English player Sir Bobby Charlton

“The difficulty, the extraordinary, is not to score 1,000 goals like Pelé – it’s to score one goal like Pelé.” Brazilian poet Carlos Drummond de Andrade.

“Pelé was so focused on winning the Trophy. It was like he knew it was his destiny. He was like a child waiting for Santa Claus.” 1970 Brazilian masseur Mario Américo

“Pelé was one of the few who contradicted my theory: instead of 15 minutes of fame, he will have 15 centuries.” Andy Warhol

“Pelé played football for 22 years, and in that time he did more to promote world friendship and fraternity than any other ambassador anywhere.” Brazilian Ambassador to U.N. J.B. Pinheiro

“My name is Ronald Reagan, I’m the President of the United States of America. But you don’t need to introduce yourself, because everyone knows who Pelé is.” Ronald Reagan