New Measures May Be Needed
to Save Whales From Extinction

Lobbying to lift the whale hunting ban was defeated.
So why whales and dolphins continue to be slaughtered
and what else can be done to stop the killings? (*)

Despite a decision by the International

Whaling Commission’s annual meeting, which ended Friday in Agadir, Morocco, not to lift the 24-year hunting ban on whales, as global commercial fisheries and dubious scientific concerns were lobbying for, in reality, not much has been accomplished to protect these majestic creatures. On the contrary, a lot still remain in place that is further depleting their worldwide populations.
Beyond the barbaric resolution allowing Greenland’s indigenous people the right to kill humpback whales, adding to the sanctioned regular whale slaughtering done by St. Vincent and The Grenadines native populations, in the Caribbean, the ban itself is scandalously faulty when it comes to protecting these mammals’ survival. 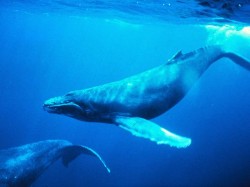 That’s because since 1986, the year it went into effect, experts estimated that more than 33,000 whales were slaughtered by Norway and Japan for “scientific purposes,” even though no such research is known to have ever been published on any serious publication for peer review.
What most do know however is that there’s a small but highly profitable market for canned delicacies made from cetaceous meat, freely commercialized in many Asian and European countries. And that the hunting of whales is an economic staple of many an indigenous population of poor Pacific Rim islands. As with the research mentioned above, it doesn’t take much science to put two and two together and realize why there’s fierce opposition to enforce a serious ban on commercial whaling.
WHALE AND CRUDE
It’s not out of context to relate the bad environmental consequences of endless demand for fossil oil, and its current oversized presence in the world’s economy, and the demand since the 1700s for whale oil and its byproducts.
As what happens today with crude, whale oil fueled the expansion of global economies and, for a brief while, was single handedly the main source of revenue for countless nations, surpassing even the always more relevant commercial fishing industry.
Ironically, two “new” sources of energy replaced

and effectively killed the whale oil industry, before it had a chance itself to extinguish the animals from the (liquid) face of earth: crude oil and electricity. The harnessing of both types of energy proved to be a cheaper, more accessible and, it seemed at that time, less risky way of meeting the demand for fuel by the world’s growing population.
It’s too bad that, in the long run, our efforts to develop electricity haven’t gone as far as what was put upon turning oil into the Industrial Revolution’s preferred source of energy. Just imagine, for a moment, where we would be by now if we had moved on in the 1800s from crude oil to better, more effective electric power to wind to solar and to other alternative sources of energy. Instead, we gave preference to developing crude oil to the beat of billions and billions of dollars, and two centuries later, we have no idea how to control it or prevent it to irremediably destroy the earth’s eco-system.
BRAIN POWER
But the biggest loss with the depletion of whale populations worldwide is still poorly understood. Only now, leading marine biologists are becoming aware of the highly complex and extremely developed cetaceous brain, and what it can teach us as a newer species living in the same planet.
20-odd years ago it was exactly this argument, brain size and endless unknown possibilities these giants, mammals like us, could represent to the understanding of our home planet, that swayed public opinion toward a worldwide ban on hunting whales. What will it take to do the trick again now?
We became so jaded about the negative effects of pollution, global warming, the melting of ancient glaciers, that some doubt we still have in us the ability to be shocked into action, especially of the long-run kind.

That’s why some are desperately searching for ways to illustrate what would it mean to lose for good whales to commercial fishing, unbound pollution, and human vanity. They’re comparing it, for instance, to the loss of an entire language, but that has been already happening at record speeds and most still ignore it and don’t even have a chance to guess what such tongues could express that ours can’t.
Others invoke, for the sake of argument, the disappearance of entire tribes and their survival rituals, which enabled them to overcome unnamed natural disasters and unimaginable catastrophic events to their way of life. None of them comparable, of course, to our own destructive arrival in their lives.
KINDRED HEART
At the end of the day, though, it may be something akin to human compassion, or whatever is left of it, that may do the trick. Some yet undiscovered capability of our own brain that will illuminate a new awareness, a renewed sense of communion with the natural world, an affinity that arises from kindred hearts under stress. Or maybe establishing verbal contact with the whales themselves.
Why not? There’re many scientific studies that have already classified cetaceous intelligence within the gap between chimps and humans. All are species that show self-awareness in front of a mirror, live in highly developed socially organized communities, and are capable to communicate with each other using sound patterns.
And, very important, unlike cartoon depiction of talking animals, whales and dolphins speak without opening their mouths. Who knows what does that mean but it’s already a radical departure from caricatured visions of Fido complaining about his food. Which doesn’t mean either that we should let loose our imaginations and start attributing them Freudian slips or an appreciation for Ingmar Bergman movies circa 1960s.
What’s clear is that we, as a species, race, civilization or plague of this planet, cannot afford to lose such a mysterious species living in our backyard. We should be willing to give up on a lot of things to make sure we don’t lose this one, which we know so little about and that may hold a key to a hidden door of perception.
When Herman Melville, the author of the classic “Moby Dick,” said “a whale ship was my Yale College and my Harvard,” he was referring to his becoming a man, of course, and to an industry rightly doomed to disappear. When our understanding of whales coincides with the era of its possible demise, we also realize what no Yale or Harvard will ever be wise enough to teach us.
For the destruction of other species has been for far too long a way we know to survive, and our bravado self-appointed role as manager of this planet has been pointing to our own demise since the time whales have migrated to the water, in anticipation of our arrival.
We may not even like water but we need it to remain alive. We’ll never be able to see what air looks like, but our lungs collapse when there’s none of it. The fact we’re so ignorant about whales, and dolphins, and so many other species we don’t even know exist, is no excuse for us to put a price on their deaths.
“Why on earth its biggest creature survives on very tiny fish, and we require the constant disappearance of countless species and tribes and lands, just so we can go on living to choose who should be killed next?” D. SaintCroix