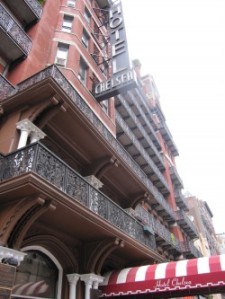 Bob Dylan and Leonard Cohen slept there. So did Andy Warhol. Robert Mapplethorpe and Quentin Crisp had a few loud arguments. Arthur Miller was once heard screaming on the first floor, while Eugene O’Neill and Charles Bukosvski used to get drunk but kept to themselves. Unlike Sid Vicious, who stabbed his girlfriend to death in his room, and passed out waiting for a drug delivery.
Now the Hotel Chelsea, as those who know little about it call it, is up for sale, squeezed by the new realities of stratospheric real estate values and not many enduring celebrities, naive enough to move in there and entertain us all with stories of excess and debauchery. Which is a shame but also a bless in disguise. Imagine if Taylor Swift would decide that the settings would be perfect for her new album of country covers? Or Justin Bieber would sign his new signature video game in one of its hallways? Or even if, grasp, Glenn Beck would descend upon it like an avenging cherubim and make a statement against the sins of the city right at the hotel’s lobby?
Coming to think of it, it all sounds very parochial and possessive from our part, this zeal to preserve what, let’s face it, is no longer what this town of blaring Times Square lights and not a single Red Light district, of snobbish billionaire kin and hardly a working stiff to save the day has become. But the place is one of the few left, still in good standing for all its rent delayed customers and urine soaked entrance, so be it and beat it.
But alas, there’s little else anyone can do about it. The controlling families themselves no longer see eye to eye with the few derelict tenants, and the ones who actually pay the rent on time, won’t have anything to do with the storied past of the place. In fact, we hear they’re holding a fashion shoot in there this weekend. And the whole top floor has been rented to an unidentified Saudi sheik.
If the recent history of similar demises, from the Stuyvesant Town and Peter Cooper complex to the Plaza Hotel are of any value, it’ll most likely be sold to some mega-corporation that will file for bankruptcy right after evicting all the low rent tenants, making a few million in the process and contributing to the general malaise we seem to be getting used to about this town: all “storied past” and no viable fit for the brightly rich and miserably unimaginative future a few bored investors hope it all will become within a few years.
If you, like us, feel a bit steamrolled by the utterly anti-bohemian march of these times in Manhattan, there may still be places to go and recharge yourself, but the Chelsea Hotel is not among them. Too many books and songs have already been written. Too many celebrities are no longer invoking it as the best spot to die. Too many publicists have staked ownership over its faded glare. Let them all have it.
We’ll always have the Jane Hotel. Oh, pardon us, that one is also no longer cheap and seedy and pregnant with the chiaroscuro of scented memories. Oh well, you’ve got to have something else, then. It was nice while it lasted but we know now why some flop houses at the Bowery, also under attack, are starting to look they really belong. At least their bedbugs have some mileage.