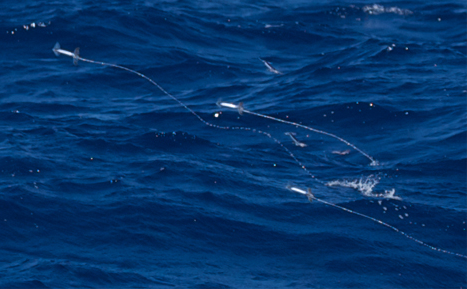 Airborne Antics Caught
On Film for the First Time

It turns out there’s a lot we still don’t know about squids. While the giant kind has captured the imagination of scientists and fishermen alike, but is still to be captured alive, their smaller cousins have now been caught on camera for the first time ever flying above the water.
This could be one of those stories that’d start with, “the water was very inviting that day, my friends.” Marine biologist Silvia Maciá was the first to report squids leaping from the waves off the coast of Jamaica, during a trip in 2001. According to her, their behavior could only be characterized as an intentional form of flying, since they seemed to actively propel themselves out of the water, not just jump out of it.
Other scientists, who witnessed the same phenomenon and were able to photograph the invertebrate creatures in the act, confirmed her observations.
Of course, for those who are way more interested in finally meeting the giant species, even if not necessarily flying, and if possible, from a safe distance, the scientists’ astonishment with the new discovery was nothing short of a puzzle. But to see it happening from the deck of a cruising ship, for example, cocktail in hand, surely beats paging through pictures of dead ones in a book, however big they may be.
Besides, coming across a gigantic cephalopod in the middle of the ocean, perhaps even doing battle with a blue whale, for example, as they used to be drawn in old adventure tales of the sea, presents a practical impossibility: their scale would be so much beyond that of a human being that, most likely, the scene would be the very last thing the person would ever witness, right before drowning.
So let’s start with small miracles, shall we? Squids, after all, are so special that there’s not even consensus on what to call their collective. A “retard of squids” is deemed by many, well, mentally impaired and not worth the comparison with a parliament of owls, for example, or a murder of crows. The jury is still out on that one.
But we digress. Consider that you’re on a boat with squids riding on the air along it. It would be pretty, wouldn’t it? You may go ahead and stop right here, on this placid image. But you could also go on and picture them, instead of flying along you, running for dear life from a gigantic squid that’s about to surface at any moment and swallow whole your boat, you and everything else in its wake.
Who knows? Squids may be moody creatures, after all. And there’s so much we still don’t know about them.