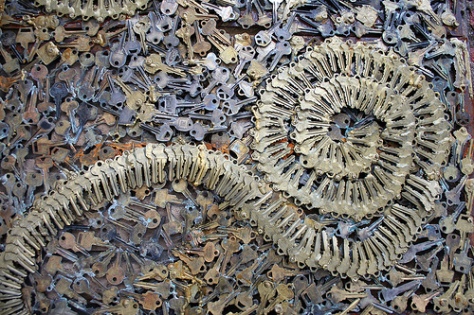 The picture above depicts A) a still of the creature’s tail for the sequel to the movie franchise “Aliens”; B) a new species of marine worm, photographed for the first time at the bottom of the Hudson River; C) a New York artist’s show about the thousands of keys he and his friends and family have lost along the years; or D) a detail of the exquisite wall panel work recently uncovered at a long-ago abandoned subway station.
If you’ve chosen any of the above, you’re out in the cold. For this is part of the facade of the Greenwich Locksmith, designed and installed entirely by owner Phil Mortillaro. The place has been at the same location for 20 years, and its new design, since October, but you’d be hard pressed to catch its sights. It’s a low foot- traffic stretch of the Village and hadn’t been for scountingny.com, we also would have missed it.
The 40-year old business has seen brighter times but it’s still doing Ok, despite the recent dip in the city’s burglary rates. After all, this is still a place where a lot of people move to and move around, way more than they’d in other parts of the country. And unlike, say, typewriters and subway tokens, the good old fashioned metal key is still the way to lock yourself at home.
It also helps that Mortillaro still has it. His eye-opener, labor-intensive design is a statement of sorts, that reaffirms a certain faith in the business of providing people with a fresh set of keys. They still lose and forget them, you’d be surprised to know, at roughly the same rate they misplace their cellphones. No wonder the two items are considered the main reasons to go back home and retrieve them.
Of course we’re on our way to have them both combined into a single, handy device. Yet another card to fit in your wallet, if you still have one, is likely to be the next stop for your cellkey. But there’s a reason locksmiths give you a pair of keys and may store your data to make an extra one on demand: keys get lost. If hassle is not your thing, you definitely don’t want to lose your phone, specially if it has your keys in it.