Want to Ruin a Dinner Date?
Try Lighting Up an Old Candle

have long known that an intimate meal by candlelight can be a promising preamble for a night of romance and dream. Except when you ever so casually disclose, between delicious courses of your newest recipes and repeated sips of a fine vintage, that those wonderfully scented candles are actually made of… human fat.
No need to beg your guest to come back, wait, you forgot your bag, I was just kidding and all that. Chances are, you’ll never see that person again and don’t be surprised if you learn that the words “creepy” and “disgusting” pop up right along your name on an Internet search. 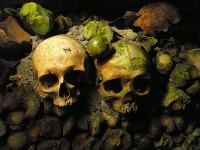 Yes, my dear single friend, perhaps unwittingly, you’ve just transformed the dream of a night of kisses and whispered love songs into a nightmare fit for beasts and cannibals. And guess what? It all started long ago in Paris, a city suffused with romance, love, poetry, do we need to keep on going?
Let’s us explain it real fast, so you can get to work on those suits to clear up your good name, before it’s too late.
Between the 12th and the 18th centuries, the Cemetery of the Innocents was as popular in Paris as any burial site could be. People would come from very far just to enjoy the privilege of being laid to rest there (or so their family and killers would claim).
So much so that most were actually just dumped in 60-feet-deep mass graves, to the rate of 1,500 bodies to each, according to records. And in 1775, when even that was not enough and er overpopulation reached critical mass, King Louis XVI, known for his clever mind, closed that and all other cemeteries in Paris. Almost as saying, go and die somewhere else.
The church, whose revenue for centuries has relied, in one way or another, on human mortality, interceded and was allowed to exhume and move the corpses to mine shafts under the city. Those mines are now known as the Catacombs, which you probably visited sometime ago with that same person who’s just ran out of your door, in revulsion.
Now

here comes the part about the candles. It turned out that those mass buried corpses hadn’t decomposed properly and got rather “converted into fat. The substance of the skin, cellular tissue, and tendons, all the soft parts, and even the bones had completely disappeared,” in the precise, no-frills description of an 1852 Scientific American article.
In other words, everything was reduced to human fat. That’s when the ever so industrious “soap boilers and tallow chandlers” of Paris rushed to use it to make soap and candles. Such industries haven’t changed much since then, but the fat now comes from vegetables and animals.
We wouldn’t be surprised though if an antique store would still carry some vintage soap for sale. We bet the shopkeeper would look over his shoulder, before leading you to a back room, where he’d keep a few bars stored for just the discriminative buyer such as yourself.
But as it’d be very hard to determine the provenance of such a secretive and well wrapped specialty item, may we recommend you skip that particular sale and, since we’re at it, also get rid of the candles you may have at home altogether? Your local fire department will be much obliged.