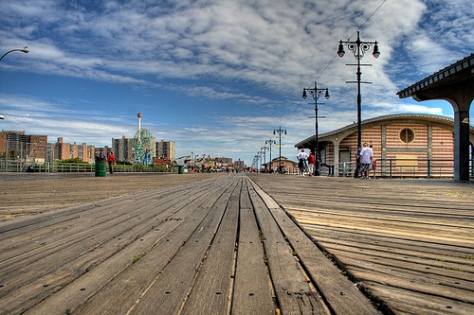 After the Quirk and the Clown,
Time for Coney Island Boardwalk

When you think about the endangered Amazon forest, of which the biggest part is located in Brazil, thoughts about indigenous peoples, the environment, healing plants and the majestic Rainforest may come to your mind. But hardly ever the famed boardwalks of Coney Island, New York City.
In another one of those things you didn’t know, but now it hardly matters because it’s already on its way out, so it happens that the slabs of wood people have been stepping on and singing about since the 1920s are made of Ipe, a tropical hardwood that’s been depleted, along with most of everything else in the Amazon.
Ipe has been the wood of choice for city’s park benches, piers and walkaways, but all is changing now, starting by Coney Island. Either for environmental concerns, or “to enhance its real estate appeal,” the boardwalk is part of the city’s big plan to change the whole area, and is being redone with concrete strips.
Of course, people hate them. How are they supposed call it now? Stonewalk just doesn’t have the same ring to it. Worst, it’s all part of a sad trend of “reforming” Coney Island, which locals and lovers of its social-cultural significance, prefer to call gentrification.
A phenomenon that seems particularly intense and fast in New York, as it’s probably nowhere else. Or have you heard they’re replacing the storied Rooftops of Paris any time soon? In New York, though, we seem to be always racing toward the new, and Coney Island, we gotta say it, is each day resembling more like another middle America great adventure multiplex.
The park itself was never the problem, of course. It’s the area surrounding it that went into disarray in the 1960s, for lack of investments and basic incentives to low income families to prosper there. Despite chronic, huge swaths of undeveloped land, Coney Island saw a dramatic decline in affordable housing, decent schools, security, even jobs and infrastructure that would make living one hour from Manhattan bearable.
The switch from traditional boardwalk to concrete only adds insult to the injury for Coney Islanders, frustrated from seeing it vanish through their fingers and having no veto power over what’s been done to it. The official line is that none of the native hardwoods can be used as boardwalks, because they splinter way too easily.
And whoever proposes using plastic will have to meet the wrath of the now-unemployed Creepy Clown. We would definitely not recommend it.
For the record, we still love the place. We just can hardly bear visiting it these days, with its blocks of boarded storefronts and over-emphasis on hot-dogs, and beers, and high-tech roller-coasters.
It goes without saying, but Coney Island with almost none of the dirty, ill-reputed, fetid sideshows, and its homemade burlesque and scary carnies and sexy contortionists, all seemingly residing right behind the badly-lit stages, well, it’s just not the Coney Island we’ll never forget.