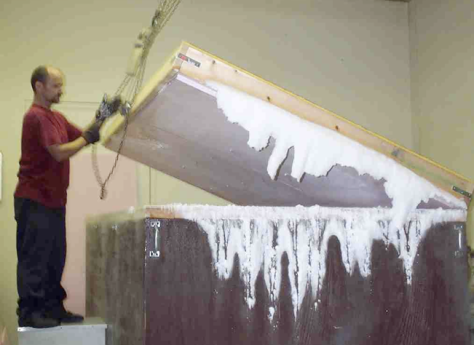 Freeze it or Reconstruct the Face:
Dressing Dead Bodies With Fungi

The death of Robert Ettinger, founder of cryonics, and Frank Bender, forensic sculptor extraordinaire, within a few days of each other last week, somehow encapsulates two radically different views of our longing for permanence far beyond our natural expiration dates.
Their obits also extrapolate two curious takes on how we should dispose our earthly remains, when that date does come: put a speed on the organic matter that will feed on the body, or simply burn it and stuff its ashes in lethal bullets. Your choice.
THE BIG (COLD) SLEEP
Ettinger, who died on July 23 at 92, a physics teacher, lived his life as a scientist and sci-fi writer. But with his 1962 book, The Prospect of Immortality, he laid down the basic tenets of cryonics, the radical concept of freezing the body after death, so it can be revived by yet unknown medical techniques of the future. 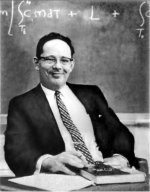 He went on to found and lead the Cryonics Institute and the Immortalist Society, and became the movement’s most visible figure. That did not prevent his ideas, and the ethical debate over the procedures to make it all possible, from taking a life of their own, completely independent from him, and mostly close to public derision.
His scientific training may have been instrumental in insulating him to it all, even when related theories of resurrection and reincarnation reached a feverish pitch during the 1960s, and for a moment became entangled with his own.
Ultimately, though, the movement he inspired did become another sobering symbol of society’s bottomless vanity and foolish pursuit of even a resemblance of immortality. Unspeakable acts of barbarism have been committed throughout our history in the name of such pursuit but that, we’re sure, can’t be blamed on the shy professor from New Jersey.
In death, his body was, of course, frozen, or rather, cryopreserved, as his first and second wives and mother had been before him.

And as a bunch of multimillionaires were, rich and willing enough to afford the expensive procedure just so to come back some day to rejoin the party. That does not include, we repeat, Walt Disney who, according to the record, was cremated. Please, don’t bring this up again.
Ettinger and they all will be awaiting for a day, perhaps still far in the future, when medical science will have the cure for most diseases, and above all, the answers for the paradox of death. At this point, though, odds are stacked so high against them, as to equate their chances to those who believe in reincarnation and coming back to earth in another body.
RECONSTRUCTIVE SKILL
In some parallel way, re-creation of life was also part of Bender’s lifetime occupation. A trained photographer, he excelled in the rare art of reconstruction of facial features from bones, a way more utilitarian endeavor than Ettinger’s but no less scientifically challenging. Yet, when he died on July 28, at 70, he was celebrated more for his artistry than for forensics abilities.
The

fact that some of his work was crucial to many a police investigation and, in some cases, restored due justice and humanity to long dead victims of despicable fates, made such artistry as transcendent and lasting as few criminally-related pursuits could ever achieve.
As most obituaries about him pointed out, his work had a lot to do with turning back or forward time. He sculpted about 40 or so heads in clay throughout the years, crime victims with no fingerprints, dental records or even DNA left to identify them.
Some of them were completed from whole skulls, and some from only pieces of bones, and like an ancient headhunter, he’d boil them first. Using photographs and lucky guesswork, he was able to help the F.B.I. catch murderers on the lam for decades. Those belonged to the forward time category.

When not busy reconstructing heads, he’d work as a fine-art painter and sculptor, or even get busy on a tugboat. He published books, or inspired others to write about his rare skills and career. And he also managed to found the Vidocq Society, a volunteer group of investigative buffs that focus on unsolved criminal cases.
You may wonder whether such a man had nightmares often, something also covered by the Times and other obituaries about him. Apparently, he did. But instead of being on the giving end, saving people from obscurity, he’d be the one rescued by them from the claws of murderers.
Which pretty much summons up how he saw himself: an avenger, with no weapons and armed only with some clay, paint brushes and imagination. Quite powerful too, as it turned out.
THE MUSHROOM SUIT
For those who can’t afford cryonics, or are lucky enough to expect ways of being buried that don’t involve psycho killers, there’s still the quest of ages: how one should go. We may be running out of room to lay people on the ground, despite some very hopeful and vengeful criminals who aim at just that for their enemies.
But 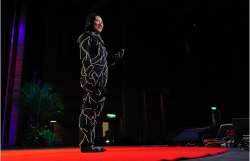 it’s still the most environmentally sound choice, when it comes to decide which way to go, as one would casually pick a dish on a restaurant menu. Cremation releases green gases in the air. Burial at sea can be hazardous to the oceans too, if not done properly. All other alternatives that do not involve dismemberment or criminal activity are not very practical.
But artist and human-environment researcher Jae Rhim Lee came up with another way, for the old-fashioned, just-dig-a-hole –on-the-ground crowd: a fungi-laced full-body shroud that actually eats the body. It’s said to abbreviate the natural decomposition process by a considerable amount of time.

There’s also a subtext in Lee’s Infinity Burial Project, something along the lines of acceptance of death and the need to change our ways of facing it. All very thoughtful and considerate but we sincerely doubt that the dead would give it a damn, once on the horizontal position.
Mushrooms though are known for their ability of extracting heavy chemicals from the soil, so Lee is definitely heading on the right direction. She may’ve also taken her cues from some organizations dedicated at providing burials at sea, dressing the body with only a biodegradable shroud and, as with Lee’s project, eliminating altogether the highly toxic and known carcinogen formaldehyde used in body embalming on land and at sea.
THE ASHES-PACKED BULLET
And then there’s Holy Smokes, which offers an explosive way for a send-off

fit to cowboys and Civil War re-enactors; send them your ashes, or the ashes of someone you loved and wanted it, and they’ll pack them into the ammunition of your choice.
That’s as far as they go; what you or your loved ones do with such memorialized bullets is up to you, and the discretion of law enforcement, of course.

You may choose to pack you dust into rifle cartridges or shotgun shells. It’s all respectful, compassionate and the carbon footprint of such a service is much less than one from a regular funeral, according to the company.
You may even, as they say, continue to protect your home and family, presumably those left behind. Again, it’s entirely up to you whether you decide to inject particles of your own death into someone else’s body. It’s sounds a bit like something a vampire would love to do, but hey, some like it hot, and some like it with a bang.