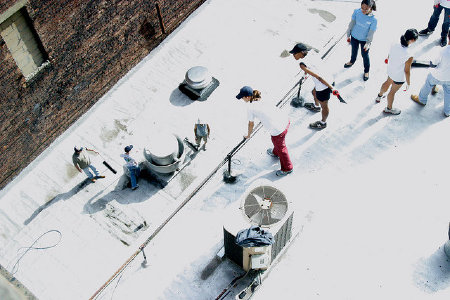 Against Heatwave, Common
Sense Beats Talking About It

You may complain about the scorching weather until cows can’t come home, because they all died of sunstroke. Or you may do something about it. As we speak, at least two initiatives are ready to start making a difference for thousands of Americans.

as U.S. cities bake under record temperatures, many of them seem to be getting on board for a simple and cheap idea: paint the rooftops white.
It’s a proposal that has been percolating for years, but its time may have finally come. Even former President Bill Clinton has been talking about it. As he wrote on Newsweek, “Every black roof in New York should be white; every roof in Chicago should be white. Every flat tar-surface roof anywhere!. As a bonus, it can help the economy by putting people to work.”
According to researchers, white roofs can stay up to 30 degrees cooler than traditional dark roofs, generating a cooling effect throughout the building below. And that means less electricity used for air conditioning.
New York has already at least two initiatives to paint rooftops white, NYC Cool Roofs and the White Roofs Project. More should be coming soon. Somehow, the way the concept is being spread out throughout the country has a lot of what some good, old-fashioned grassroots movements of the 1960s used to display: a combination of community activism and the political will of local governments.
FROM AIR TO WATER
We never ceased to be wowed by human ingenuity in the face of challenges from the elements, though. Take Texas, for instance, where extreme temperatures in the past few days have led to record power usage and an energy emergency alert issued by the state’s electric grid operator.

So it’d take a Texan, Terry LeBleu, to come up with precisely the kind of invention we all need at such a time: a machine that makes water out of the air. You read it right: the Drought Master sucks in moisture-laden air, condenses it, then exhausts the purified air and captures the water, which is filtered and ready for drinking.
Just think about the far-reaching benefits such a machine can represent. LeBleu says it produces between 5 to 7 gallons of drinkable water a day, at just 4 cents of electricity cost per gallon.
It definitely beats buying bottled water from the supermarket, that’s for sure. Not that they have many up there in Africa or those drought-stricken nations equally wilting under the sun.
So, as we were saying, you can talk and talk and talk about the heat. As the comedian Andy Borowitz says, chances are, the person you’ve been talking to may not have noticed it, before you brought it up.
So glad some would rather do something about, then.