From the loincloths of 7,000 years ago to today’s multitude of styles, the underwear has come a long way. Fortunately to everybody, we won’t dwell much on the subject.
We plan on touching ever so lightly on the latest news about it, but promise to skip as many unintended puns as possible.
For unlike celebrities who sign and auction theirs for charity, and media rats who go through garbage bins of royalty and sports icons searching for discarded ones, we’re simply not interested in covering the subject as news. Only briefly. (Sorry, we couldn’t help it.)
UNDIES ON THE ROAD
What spiked our interest was, of course, the world breaking news that thousands of mostly women panties were dumped last week alongside a road in rural Ohio.
Altogether, about 3,000 pairs in an assortment of colors and patterns were found in trees and on hillsides, some still folded the way they’d come in packaging, while others appearing to have been worn. It’s a puzzle that got local authorities with their knickers in a twist, we’re sure.
Since underwear is not something one would buy in an used clothes store, that means that some 10 large trash bags are destined to landfills outside Columbus.
UNDERWEAR AMNESTY
Across the pond, it was outrage, not surprise, what greeted the news about TramCo, a Dublin bar now infamous for more than its name: Gaelic for “shitty nightclub.” 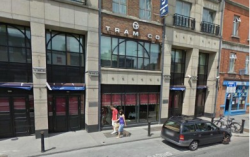 Friday nights are now time for its “Underwear Amnesty” parties, and patrons can trade in their underpants for alcoholic beverages.
No big deal for those who have been to a bar in New York City’s Meatpacking District, where the main decoration is a collection of brassieres left by customers young and old.
The problem with the Irish dive is that it was also the site of a horrible rape of an underage girl a few months back. Even though the perpetrator is in jail, for some organizations fighting sexual abuse, the idea is at least, tasteless.
We could go on, preaching or arguing for or against both sides, but that’s also akin to go around sniffing other people’s rubbish, so we won’t.
TURNING UP YOUR NOSE
If body odor is what you don’t want to have associated with the general subject of this post, there’s Angela Newnam, an entrepreneur who turned an obscure patent into a much-sought after product.
We

give you the world’s first odor-free underwear, and most likely the only serious item in this now long list of useless information about such a vital piece of wardrobe.
The technology is simple but seems to work: an airtight underwear with a replaceable charcoal filter that removes bad-smelling gases before they escape.
A touch of fashion designing and, voilá, Ms. Newnam is poised to make a killing, even in these tight times. And, naturally, it’s not been marketed only for women, since how anyone feels about their bodies often determines what kind of place they occupy in society.
PULLING THE G-STRINGS
And with that, we’ve shown that’s possible avoid this subject’s cliches, and still bring you some fresh news about it.
Of course, it helps that in the past months we’ve already told you about bulletproof underwear for marines; of underwear lined up with tungsten, to go through airport scanners; and about an annual Underwear Day Parade, in Brazil.
By the way, talking about parades, there’s one scheduled for later this month in Salt Lake City. It’s the Utah Undie Run which will try to beat a Guinness Record for most people gathered in their under pants, while protesting the city for being too “uptight.”
A last bad pun is left, but we’ll be tight-lipped about that one.