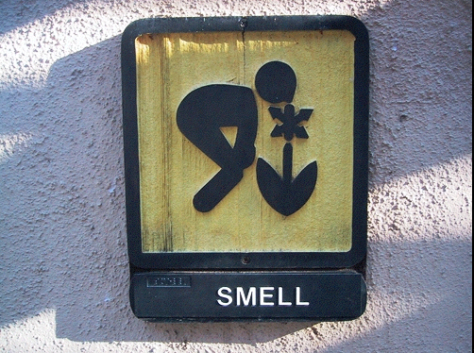 In keeping with the spirit of yesterday’s Valentine’s Day tour of the Newtown Wastewater Plant we’ve told you about, and the Scratch and Sniff Rapsberry Jeans in your shopping lists, we’ve decided to, er, stick our nose into this issue too. And wouldn’t you know it; when it comes to our most powerful sense, not all is fishy.
From Odor Patrols roaming streets of a L.A. county, to a Mr. Sunshine who identifies foul whiffs on trains all over the world, to a researcher tracing the ‘smellscapes’ of Sheffield, in the U.K., we assure you, there won’t be need to hold your nose reading this post.
Perhaps it’s a necessary self-defense mechanism urban dwellers develop early on, to protect themselves from the constant assault of smells, stinks and stenches anyone goes through just by living in big cities.
Assuming that we keep our own to a minimum, such onslaught of bad air is usually generated by fellow humans and their failure to do us a favor and leave us out of their faulty hygiene habits.
But cities do stink too and, sometimes, we even like their not-too kosher impact on our mood. It is a fact that certain smells can bring back memories and recollections better than any other sense.
It can also brutally interrupt our revelry, if we don’t sidestep it in time. We could digress about our own anatomy and the geography of our sensual senses, but there’s no need to be graphic about it.
Finally, we can easily relate to an environmentally friendly tour, even in a day dedicated to roses and chocolate and sexual bribes. It’s beyond us, though, to wonder who the hell would want to wear a fruit-smelling pair of jeans?
THE STENCH PATROL
If you live close to a landfill, everyday is a reminder of how much we, collectively, stink, both in a physical sense, and in our societal wasteful ways.
Things can only be worse if you either live close to people who actually make a living off of what society discards, or you are yourself part of one those communities.
The world over, city garbage dumps are places where birds and rats mingle and dispute scraps of food and dejects with the absolutely dispossessed. Even the fact that such places exist are enough for anyone to throw up or do something about it.
Thank goodness that all that the people living near the Sunshine Canyon Landfill (we’re not making these names up), have to contend with, then, is with the smell, right? Not really.
Through the years, the community of the Granada Hill North neighborhood has filed countless petitions and complains about the toxic fumes from the dump, to not much avail.
It’s still there and, boy, if you haven’t been there, you have no idea how intense it gets. Now, though, there’s a novel idea the management of the place has come up with: it created an Odor Patrol Team.
Part public relations, part an attempt to address complains, the team works on foot in five-hour shifts, covering up to 10 miles of territory. Residents, though, remain unimpressed.

PALLIATIVE CARE
That’s because, while tools and techniques to detect smells have improved greatly in the past decades, once acknowledged, there’s not much that can be done.
The smell of rotting matter and of ‘landfill gas’ are naturally occurring by-products of such a wasteful way of disposing garbage. In other words, either we change the way we get rid of our debris or have to put up with its smell. If not us, then the people who live around it.
So, the patrol has a series of tools to help them gauge the intensity of smells, including measuring wind speed and direction, and many other weapons. There’s even a portable odor detector, the Nasal Ranger.
What’s not in their job description is the power to make long-term recommendations, and ultimately, solve the problem. Residents, of course, think the whole effort is pure PR and mostly don’t buy it.
But even if the waste disposal company acts at times as if it could get away with not doing anything, if not forced to, landfills are medieval solutions for disposal of stuff that’s designed to last a thousand years.
They can mitigate the problem, residents can file hundreds of complaints, but what’s at stake is our own way of life, or at least, what happens when we’re done with it. There are ways to deal with it, but it may take a lot more than just sticking noses and fingers in this rotten pie.

THE PATH TO STENCH
The last time Larry Sunshine, president of Plasma Air International, was in the New York metro area was to investigate the origin of a mysterious (and horrible) smell pervading the tracks and annoying the bejesus of Path train riders.
Apparently since the 1970s, those trains stink in an almost perverse way, enough to make commuters gag. This time, though, they’ve called in an expert.
Despite his name, Sunshine’s a tough reputation preceded him, with years of experience that include ridding 300 Sydney train cars from a persistent toilet smell. How? Please, ask no further.
Why he was invited by the New Jersey Transit Authority, which operates the Path trains, and not the MTA, which runs the subway of this great and smelly city, will also remain unexplained.
Under the Hudson River, however, he did, indeed, smelled something. His diagnostic: it came from the trains’ new plastic seats and newly printed advertising posters. Well, don’t look so deflated; we assured you we wouldn’t make you throw up.

SMELLSCAPES OF SHEFFIELD
Nothing as mundane happens across the pond, as any anglophile will tell you. Specially in what smells are concerned. Ask a Brooklynite, he’d loudly say, it stinks in here. In Sheffield, though, the matter deserves a dissertation thesis and a team of researchers.
The doctoral work of Victoria Henshaw, an associate at University of Manchester’s Department of Architecture, focused on the role of the sense of smell in urban environments. And she designed a walking tour to go along with that. How very British, you may say.
After ‘fifty-two smell walks in Doncaster’ (how sad John Lennon is not around to appreciate this), and other cities, including Seattle, Henshaw perfected her technique.
For Sheffield, she scouted first and planned a tour starting at an old relish factory, from there to a nearby park, passing by some ordinary stairs, and ending at a space full of ‘cigarette ends.’ Quite a tour, eh?
Such ‘I’ll go and have a smell’ spirit is, we must admit it, very brave for anyone, not just nice researchers from the North of England way. And, surprise, surprise, she did detect gender differences in the reaction and description of smells people found along the tour.
‘Female participants would say things like, “That’s the smell of vomit, ugh, that’s making me feel sick,’ she says. Men, though, were generally more er accepting of what they found. But you knew that already.

WHAT’S THAT SMELL?
An interesting insight was the association people usually make of smells and the perceive danger or cleanliness of places. Spilled alcohol, urine and vomit, for instance, tended to make participants uneasy. But the scent of water fountains and coffee brought them a sense of reassurance and comfort.
Interestingly too, we tend to assume certain places, such as traffic stops and motor running, smell strongly, no matter what, even when they temporarily do not. When that happens, we explain it away, saying that’s just the wind that blew it away. That’s when ingrained perception beats the evidence.
Her research offers other fascinating insights in the way people smell things, imagined or real. And the difference between what they think they feel, without smelling them, and what actually happens when exposed to them.
In a city ethnically so diverse, a walk through a New York neighborhood is a festival of colors and smells. Cooking and raw food, perfumes, scents of unidentified variety or familiar since our own childhoods, to experience smells is a complex and subtle part of being alive.
With all the respects to those who can’t sense it, the ability of instantly recognize a smell and relate it to its origin and roots deep within our consciousness is one of life’s greatest pleasures.