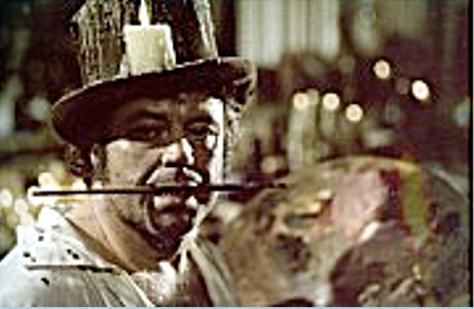 An Exchange With Robert
Hughes He Doesn’t Recall

about Russian filmmaker Andrei Tarkovsky threw me for a spin today.
The note, on DangerousMinds.com, was about “The Steamroller and the Violin,” first feature of the man Ingmar Bergman credited for having “invented a new language, true to the nature of film,” as the blogger Paul Gallagher writes.
In a second, I went back in time, to a brief encounter on a street of SoHo, New York, with the Australian art critic Robert Hughes. Having as a rule never to approach someone famous, I confess, I did make an exception at the time.
Hughes had just published a highly praised biography of Francisco de Goya and I wanted to ask whether he knew the Russian movie about the Spanish painter. It was directed by Konrad Wolf, and stars the Lithuanian actor Donatas Banionis, the same one who was in Tarkovsky’s Solaris, and that’s the connection.

It turns out the Goya of Wolf is a rarity and very few people even know about its interesting take on the artist’s political awakening. In the movie, he goes from the official royal court portraitist to an engaged painter, who created the series about the Horrors of War and the famous Black Paintings. Hughes, as most people, knew well Tarkovsky but never saw the Wolf movie.
In other words, I scored.
Now, if you’ve ever read about Hughes’s larger-than-life achievements and personal tragedies or, even better, if you happen to know him personally, you know that either because of all that, or for any other reason, the guy is not your easy old chap.
Even during such a brief moment, the air got stuffed with that sort of menace that can turn a bright day into dark clouds and pointed arrows. I’d better show some awareness that my time with him was about to be up, or else.
Following the recommended etiquette for such New York run-ins, I was, of course, walking a few feet ahead of him. There’s really no other way between a nobody like me and pretty much anyone else with a dedicated Wikipedia page. Unless, of course, the nobody is an insufferable bore or a homicidal psycho, for either case the presence of voluminous honchos is usually justified.
But I did brought up one other item to our rushed exchange, even if by risking dismemberment: it was about a Spanish art historian, Juan Jose Junquera, who claimed in 2003 that perhaps the Black Paintings, which were drawn directly on the walls of Goya’s house, were not his.
It’s a long and winding theory, but then again, there are very few facts devoid of any curves or doubts related to Goya, his life and work, however famous he was during his time.
Junquera was mainly troubled because the paintings were neither commissioned nor sold while he was still alive, no visitor reported having seen them, and Goya himself lived the last years of his life in France.
Whether his theory got any legs after all these years, I don’t know. But my story did stop Hughes on his tracks, and just in case, I quickly wrapped it up.
He rearranged one of his clutches (a remnant of a car crash that had almost killed him a few years before; it’s all on Wikipedia and, no, there’s nothing phony about his page there) and looked at me straight through my ocular bones.
– “That’s hogwash.”
And with that, I found it better to say goodbye and speed up away.
***
I did see Hughes a couple of times after this, but I doubt he’d ever recall having met me. Which may be for the best, so please, don’t quote me on that. Recalling the incident didn’t take me long; writing about it was just a matter of following it through, and it shows, I know. But the title was another story.
What finally settled it (and allowed me to get some sleep) was to imagine myself asking him how should I call it and he, way too impatient to care much about it, suggesting the title.