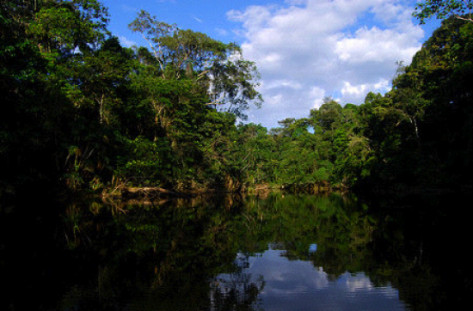 A gold rush in Peru is the latest threat to the Amazon Rainforest, as record prices attract speculators.
But in Ecuador a $116 million trust fund has preserved hundreds of square miles from oil exploration.
The most entertaining news about the forest, though, is the discovery that, not unlike most theaters and arenas in the world, it too has vantage observation points.
So step right in for the show is about to begin. Between ground floor and the nose-bleed section, here are…
THE BEST SEATS IN THE HOUSE
Between its high treetops and the 20-inch decaying-matter thick floor, the rainforest has a previously overlooked layer: call it a luscious mezzanine.
While the majority of the canopy leaves falls to the forest’s floor, a great many get trapped mid-air by the almost-invisible filaments of the fungus Marasmius, which provides room and board to insects, spiders and other creepy-crawlies.
The surprising find gets botanists such as University of Oxford Jake Snaddon excited, as the fungi fine threads are hard to see but can hold about 260 kilos of leaves by hectare, with some 340 different species of insects and other arthropods among them.
Think about that the next time your only choice are mezzanine seats. You may not want any of those little critters crawling about, but the view of the stage may as well be the best available in the house.
MINING AS THE WRONG BUSINESS
Oil and mineral exploration almost never bring the potential material progress and development to the impoverished areas where they are found. That’s true with crude in Nigeria, diamonds in Serra Leone and now gold in South America.
Despite years of industrial scale explorations and billions of dollars the raw materials have reached in the global commodities markets, those regions remain as underdeveloped and miserably impoverished as they ever were.
As soon as speculators move on, the leftovers of their enterprise are all too familiar: communities devastated by poverty, lack of sanitation and prostitution, and their environment destroyed by deforestation and heavy metal pollution in rivers and soil.

CURSE OF MADRE DE DIOS GOLD
The California-sized stretch where the Amazon rainforest meets the Andes mountains is long recognized as one of the last relatively untouched areas of the giant forest. That may not last too much longer.
High prices of gold in international markets combined with a near-complete highway in the Brazilian-Peruvian border are conspiring to wreck the region’s ecosystem, effectively driving to extinction an unknown number of plant and animal species.
Most of this activity is illegal, driven by speculators and corporations who will likely make a few billion dollars and move on, regardless on how they do it.
One of the richest and most beautiful regions in the world is also one of the most lawless and violent. The close to 70,000 people, between miners and people tied to mining activity that now call it home, live in dozens of ramshackle mining towns that line the unpaved roads and treks through the forest.
Since there’s no law enforcement, and plenty of cheap guns, liquor and teenage prostitutes, disputes between workers and with indigenous communities often end up in death. As more people arrive daily to work in the subhuman-condition open holes, more violence is expected.
Even more permanent is the damage caused to the environment. More than 70 square miles of tropical rainforest have already been destroyed since the gold rush began in 2007.

LAND OF MERCURY AND CELLPHONES
Primitive methods to extract the precious metal that some GOP presidential hopefuls wish could be used someday as a global currency include mercury, of which an estimated 35 metric tons is being dumped every year into the region’s streams, rivers and the jungle.
Since roughly one fifth of Peru’s annual total of 175 metric tons of gold is produced there, it’s no wonder that recent efforts by Puerto Maldonado local officials to halt illegal mining have been met with violence.
To many, the lawlessness and extreme poverty, along with unhinged ambition of a few very wealthy patrons has its historical parallel in the conquest of the Old West in the U.S. The analogy stops making sense, though, when one spots the many cellphones, satellite TVs and luxury SUVs that roam the area.
None of these high-end consumer amenities belong to the miners, of course. They’re usually displayed by representatives of big landowners and the few corrupt officials that help protect the investment and profit of the unidentified outside parties that actually run the show.

PAYING TO NOT DIGGING FOR OIL
Not too far from there, across the Peruvian south border with Ecuador, a small-scale initiative yielded some very promising results. In 2007, as big oil corporations started to look eager to dig under the Yasuni National Park, Ecuador issued a global challenge.
If the world could provide it with half the estimated $7.2 billion worth in oil deep under the park, it’d stay in the ground and the rainforest above it would stay intact.
Two years ago, the trust fund was ready and the deadline was set for Dec. 30, 2011. If by then, it had raised a minimum of $100 million, the project was going forward. It did and it went, last week: it reached $16 million over that sum, which was enough to preserve 722 square miles of the park.
The crowdfunding, which still has many critics, was made possible with the help of the U.N., partnerships with a European governments and organizations, and contributions by celebrities such as Al Gore and Leonardo di Caprio. But it’s definitely worth the effort.
The Yasuní Park’s biological richness has astonished scientists. One 6sq km patch of the park was found to have 47 amphibian and reptile species, 550 bird, 200 mammal and more species of bats and insects than anywhere in the western hemisphere.
According to some, it would take 400 years to record Yasuní’s 100,000 or more insect and 2,000 fish species in the region. That is, if it’d be up to those cellphone-carrying and gun-totting gangsters on the other side of the border.
It’d take much sooner than that if more governments and institutions would be involved. And, as they say on PBS stations, with more contributions of supporters like us.
The Amazon’s biggest tragedy is not only the extinction of so many known species of flora and fauna, after having survived thousands of years prior to man. Worse is to never know the many others already gone, without so much as a quick glance from us.