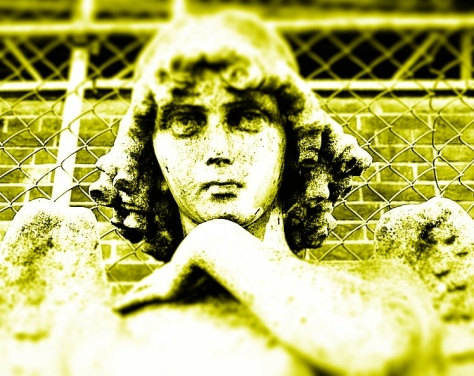 If Our Saints Are Thugs,
Your Angels Must Be Insects

Let’s face it, there are way too many saints around. If one is not careful, it’s easy to get carried away and lose sight of who they are or whether they are prayer-worthy. Yet, the very choices that some exercise in the matter may be reason for concern.
Take Venezuela’s Holy Thugs, for example. They wore baseball hats, jeans barely covering their behinds, and high-caliber weapons on their belt. They are also dead, but still command a huge following in a country with arguably the highest murder rates in the world.
And who can blame John Coltrane worshipers? He too commands a hefty following. Thank goodness, his weapon was a jazz saxophone.
Now, heard the latest about angels? They can’t be vertebrates, some say, since they have wings, which are technically extra limbs.
At the end of the day, there are people who’d put anything on an altar and begin to pray. A few years back, Argentinian soccer great Maradona also had a church founded in his honor. Probably because at that time, the man was a walking death-defying act.
Not for us this business of kissing someone’s er picture, and ask for guidance. No easy job either, mind you. The cult of miracles as a path to bliss, and of gambling as a savings account, has a choir of heavenly voices, and a rug full of shot-down dreams.
Maybe that’s why some like their saints rough, raggedy, armed to the teeth. Or musical, like a solo plunging into blues, a cool train screeching in tune. But then there’s this business about angels, and what they are that we don’t know.
No wonder we got derailed. Those fluffy babies, the ambiguous gender of those winged creatures. Are they really our guards, ninja-trained and supernatural? or in fact, stalkers, jealous of our smells and flesh?
After all, early depictions show them more like avengers, long swords, their face chiseled with purpose. To call them friendly would be unsafe. But if early depictions were to be trusted, then a certain Middle Eastern carpenter would’ve been blue-eyed and blond. 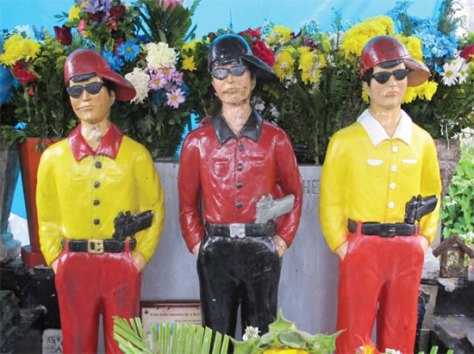 LOS SANTOS MALANDROS
As Spain has el Caganer, a mythical figure who appears relieving himself in the back of nativity scenes, Venezuela has the Thug Saints. Anthropologists who studied them say they became part of the Pantheon of local cult Maria Lionza in the 1980s, when urban violence and drug traffic was most of what everyone would associate with Venezuela.
Maria Lionza, or Saint Mary of the Jaguar, was a real person who inspired a five-century indigenous cult, slightly imbued with Catholic values in combination with jungle myths and legends. The Pantheon is the cult’s inner circle of worshiped deities.
The most popular among them is Ismael, a benevolent entity who bestows the poor with grace and special favors. The real boy behind the figure, if he ever existed, is believed to have been shot by a ‘bad’ cop, back in the 1950s or 60s.
As Venezuela has produced plenty of young, good looking corpses ever since, fallen soldiers from its drug wars and startling social gaps, it may have been easy for the Maria Lionza to incorporate and ‘restore’ some of them back to life, as inspirational figures.
In a common theme of regret and redemption, so dear to Catholicism and other religions, Ismael’s supposed to grant good deeds and peace of mind to those who seek him, which are two things he was kept pretty much apart from, when he walked among the living.
Maria Lionza is herself an intriguing impersonation of the indigenous people’s ambiguity towards the Spanish conquistadors of Venezuela, and her cult also has avowed priests, who happily accept offerings of cigarettes and drugs on behalf of Ismael.
In exchange, he’d go after your tormentors, just like South American natives may have dreamed of having someone doing, during the European invasion of their land in the 16th century.

THE SAXOPHONE PATRON SAINT
For the St. John Coltrane African Orthodox Church devout, there’s just one pantheon on which the jazz musician belongs to, halo and beatific image included: the altar of their San Francisco congregation, along Jesus the Alpha & Omega, Mary, and the Tree of Life.
The late bebop virtuoso who died of cancer in 1967, experimented with a wide range of religions and spiritual beliefs throughout his life, from Christian Zionism to Islam, to Hinduism, to Buddhism and many nuances in between.
Such openness towards spirituality may have helped him to overcome a heroine addiction and produce some of his most enduring contributions to the jazz vocabulary. Curiously, such multiple experiences didn’t include the Orthodox faith, when he was alive.
Which is, of course, besides the point. As it is to mistakenly declare that the church worships Trane, as he was known. His music, though, does constitute an integral part of the services, albeit certainly way beyond the role of a mere soundtrack.
Coltrane, who delved into many musical traditions, but whose major imprint and presence on jazz was to redefine the art of solo improvisation, by infusing bebop with Eastern harmonies, also became one of the greatest African-American cultural heroes of his time.
He was a card-carrying member of one of the most important generations of musicians America will ever produce, along Charlie Parker, Miles Davis, Dizzy Gillespie, and so many others, and managed to stand on his own.
His current status as a patron saint, if anything, proves that his music also effectively buried the cliche that victimized his legacy for so long; that of being one more unarticulated, drug addicted and ultimately, dysfunctional genius jazz musician.
ANGELS AND CATERPILLARS
‘Angels are most commonly represented as winged humanoids, with two arms, (…) two feet suggesting the presence of legs, and two wings (often feathered). This six-limbed state is not a vertebrate structure, as a look at basic vertebrate anatomy quickly reveals.’

That’s the main premise of the scholarly ‘Integrated Pest Management of Manifestations as Infestations’ paper, by researchers Sally Y. Shelton, John E. Simmons, and Tom J. K. Strang, published on an Annals of Improbable Research issue in 2004. It’s also a not-too veiled nod to writer A.S. Byatt.
The authors thoroughly dissect the anatomy of birds, reptiles and insects, comparing with what can be gathered from the liturgical, religious and classical art literature that is known about angels. Most worshipers wouldn’t like their conclusions.
But by exercising admirable restrain, they stay clear of any considerations about faith or belief, concentrating instead in the sheer science of animal anatomy. And come to the sound realization that, if anything, angels are highly akin to insects.
From basic considerations of biology, including the crucial fact that the presence of wings as an extra pair of limbs is a physical impossibility to any vertebrate, the unbiased analysis even warns about the impact of an angel infestation on the environment.
Also, meandering through a surprisingly logical line of thought, the paper considers the possibility that devils, commonly depicted with horns, themselves possible rudimentary antennae, could be the larval stage of angels.
As such, they could reflect the same dichotomy of caterpillars, deemed unsatiable pests and target for extermination by farmers, and
their butterfly stage, generally adored and admired by their beauty and grace. Just like angels, for the most part.
It’s a wide-eyed exploration, and quite effective debunking, of one of the most prevalent myths about religiosity, that pervades and defines a whole chapter of devotion by the faithful.
Such is the construct and essence of these supernatural creatures, devoid of any visible connection with mankind, and to the service of an all-too powerful warlord-like god, always on the ready to exact his whims and visit mortals with the mighty of their power.
It’s probably a natural response to this imminent doom, ready to unleash over our heads, that we also call angels some notorious mass murderers, mythical or flesh and blood, who seem as alien to us as any bug would, if it were of our own size and scale.
The Grimm Reaper, Hades, the Ruler of the Greek Underworld, and the Angel of Death himself, the Nazi Dr. Joseph Mengele, come to mind. And so comes a creeping, crawling chill to our spines.

One thought on “Divine Pests”