Talking about the little, multi-million dollar, engine that could. The Voyagers twin spacecraft, launched 35 years ago next August and September, are about to reach a place full of cliches but still vastly unknown: the interstellar space, the area beyond the imaginary trajectory of even the farthest member of the Solar System. Literally, it’s about to get to where no one has gone before.
The small crafts don’t even register on the world’s most powerful telescope screens and NASA scientists track them both by complicated astronomical calculations. But their math indicates that, yup, Voyager 1 is almost at the Heliosphere, and #2 is coming up soon after. Bye bye cruel world that mostly forgot about us, then. Except that we haven’t.
Sorry, there won’t be any cake waiting for you guys, to mark the occasion, and even our messages will get to you ever more apart from each other. They now take almost 17 hours to get to you, but fear not; for as long as there’s an astrophysicist on duty somewhere on Earth, we’ll be sending them out to check on you. Make sure your settings don’t consider them spam.

LONG AGO AND FARAWAY
It’s been a great ride for the relatively cheap probes, but now that they’re are 11 billion miles away from us, it’s unlikely that they’ll increase by much the number of important insights they’ve gathered over these past three and a half decades. For before they’ve got to this complete void, where their simple presence is their biggest accomplishment, they’ve been to places.
Both explored in depth and took striking photographs of all major outer planets and most of their moons. In fact, years from now, scientists will be still learning more about Jupiter, Saturn, Uranus and Neptune, possibly with the help of yet unknown technologies. No one alive today will ever get to the gas giants the Voyagers have visited, before undertaking their current path towards oblivion.
Even though the Pioneer mission did capture the outer planets on film before, the twins got much higher definition images that served to put together some pretty impressive animations. Along the way, finding new moons was a given. But to discover what came to be known as the ‘shepherd moons’ of Saturn, for example, which appear to ‘guide’ the rings around the planet, was a complete surprise.

MESSAGE TO OUTER WORLDS
Perhaps their biggest innovation, though, was not in the realm of scientific curiosity, but closer to the pop culture domain. Both Voyagers were the first intentional ‘message in a bottle’ type of spacecraft, carrying the Golden Record, a disc with a sampling of our planet’s natural sights and sounds, and of some of our music, from melodies and rhythms of indigenous peoples to classical, from Louis Armstrong to Chuck Berry’s Johnny B. Goode.
Then and now, the inclusion of the discs became the signature feature of the mission, and helped galvanize the public’s imagination about it. One of the idea’s architects, Carl Sagan, who was already a celebrity on his own right at the time, also benefited from the exposure and went on to became an advocate for NASA and its, now all but dead, plans of space exploration.
Imprinted outside of what can only be called the ‘fuselage’ of the crafts, there’s a schematics representation of a couple of humans, compared in size to the engine. Obviously, the sound of a baby crying was also included in the recording, along with Bach and Beethoven, most likely to annoy the hell out of possible aliens that may retrieve it.
That’s right, the message in the bottle idea was to attract the attention of extra terrestrial civilizations, to use a beloved expression of the times, in the obviously misguided assumption that they would be nice enough to come to visit us and lend us a hand sorting out the mess we’ve been putting ourselves in for the past 40 thousand years.
No dice. Since the 1970s, of course, the cheery mood of science fiction writers took a dark turn and we’re no longer enthralled with the prospect of meeting a ‘creature’ that most likely will come to enslave us. We can do that to each other on our own, thank you very much. And don’t even get started with our evil ways of treating this planet. It’s not of your goddamn business, anyway.

GIVE US A RING SOMETIME, MAYBE
So, we’re very sorry that we’ve become a bit worse since you’ve left us and we do hope you two find comfort in some distant world. If you do get in trouble, though, don’t call us, please. We probably won’t have the resources to rescue you, so forget it. If things get really hairy, try playing some excerpts of Mozart. It seems to work for babies. Or maybe it doesn’t. 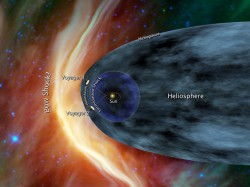 See, we got considerably busier since, and apparently won’t be even heading out of this planet any time soon, as we used to think it was just a matter of time for us to do it, then. Then again, you’re out there, no one telling you what to do and all, you should be fine. Actually if you could lose that plaque with the signs of where you came from, it’d be great.
It may be too obvious and we never know who you may come across up there. Better tell them you don’t know us. That by the time they would get here, we’d probably be done with life, the planet and everything. So why bother? We hate to be so negative, but we don’t want you to get any ideas that it’s OK to turn back. Someone should have told you that when they’ve sent you packing.
Anyway, thanks for the boost to our imagination, the dreams we had just picturing what you’d be seeing with your electronic eyes, the memories you may have of an idealist people who created you and used to consider themselves to be made out of stardust. Oh, before we forget, say hi to Pioneer if you see it around. It’s been long dead but it must be floating somewhere. We told you you’d be reaching the realm of cliches and hyperbole.
Except that you’re real, have traveled for so long, deserve better, etc, whatever. It’s not that we don’t care. Gosh, we even forgot to pat ourselves in the back for having built you. Yeah, you can tell whoever you meet that we said that. Just make sure you refer to us in the past, you know, long ago. And whatever you do, don’t play the damned crying babies to them. 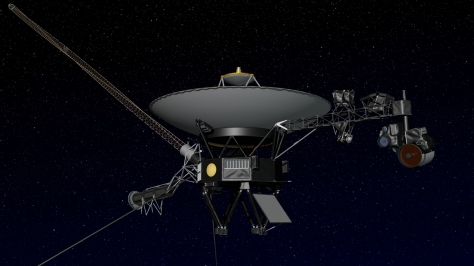 2 thoughts on “Infinity & Beyond”