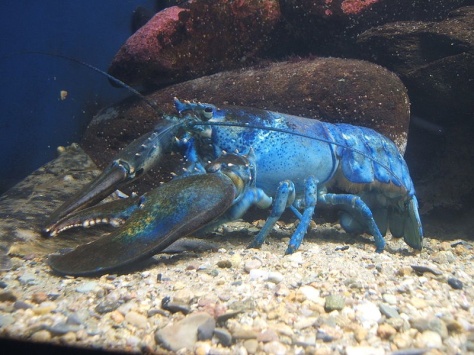 Lobsters, Once a Poor Man’s Snack,
Are Now Coming in Different Colors

They have names such as Rocky, Calvin and Lucky Larry. Found in all oceans, they’re the eastern seaboard’s main catch at this time of the year. It’s been only a few decades since these long-living crustaceans have moved up, from lowly fisherman’s meal to the season’s favorite delicacy. Now there’s something new about lobsters, too.
Any color other than their traditional mottled dark greenish brown used to be extremely rare. This year, though, for some reason, bright blue, orange, yellow, calico, albino white and even split, bicolor lobsters have been showing up in trawlers’ traps off the coasts of Maine, Massachusetts, Connecticut, and New York.
To most experts,

your guess is just as good as theirs, as for why this is happening. But, even though their appearance doesn’t indicate any other physical or genetic malformation, some of the theories offered to explain the phenomenon are slightly unsettling, as they seem to point to increased overfishing. Think tuna, for example.
Their color palette is startling, to be sure. While some admire their beauty, others see a possible environmental pollution at the root of the unusual pigmentation. Since it all seems new, the marine biology community hasn’t had much time to study in depth what may be causing it. One thing is clear, though: things like that don’t occur by chance.

But instead of dwelling in speculation, let’s meet our three amigos, three lobsters, each with a different story which helped them all to be released back into the water. And one culinary advice: if you must kill one, do not place it in boiling water. You may avert your eyes, but the most humane way to kill a lobster is by knife: one sharp stab between the eyes. Enough said.

THE HEAVY WEIGHT
The biggest lobster ever caught in Maine was captured, photographed and freed back last February. Rocky weighted 27 pounds and its dominant claw was strong enough to crush a man’s arm. It looked in size and docility more like a baby, though, according to Maine State Aquarium’s Aimee Hayden-Rodrigues, who proudly posed with him.
We don’t know how come his precise age was not determined before he was released, but estimates put it at close to 100 years old. That means, if it were a person, it’d have witnessed two world wars, the invention of much of the stuff that’s now an integral part of our lives, such as this computer, and a lot of silly things people do and say about animals.
Fortunately, it isn’t. In fact, he was not even close to the largest ever recorded, captured and released in 1977 in Nova Scotia, which weighted over 44lbs. Since lobsters may live as long as whales and turtles, it’s quite possible that our paths will cross again. We could say something silly, like we hope by then there will be no more wars and stuff, but we won’t.

THE LONG ISLANDER
A 17-pound lobster, who was waiting on the ‘death tank’ at a Waterford, Connecticut, restaurant, was nicknamed Lucky Larry, by local children. That’s because Don MacKenzie, from Niantic, bought it and then released it back into the Long Island Sound. He’s not telling how much he paid Docks for Larry, but theirs certainly was last week’s heartwarming story.
MacKenzie is believed to have chosen a secluded place for Larry’s sendoff, which was greeted by ‘a choir of children and a lift bridge’s siren from the boat that was carrying it to the sea.’ Luckily no one’s decided to assassinate the Stars and Stripes with their croak, as often happens in such solemn situations.
Oh, there’s something else too, albeit completely unrelated to the crusty crustacean: a quick Internet search brings up Lucky Larry Lobstermania, a slot-machine game that folks across the pond (that’s England to us) seem to enjoy. We’re not into that, but it was obvious that it had nothing to do with our Larry, or the Olympics happening next door over there. Luckily. 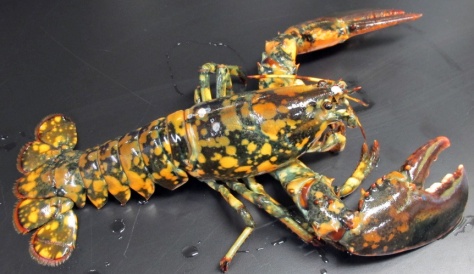 THE PET MATERIAL
Calvin, the Calico, was rescued from Jasper White’s Summer Shack restaurant in Cambridge, Massachusetts, exactly because the unusual pattern of its coloring, thought to be present in only one out of 30 million specimens. That was back in May, and since then, many more have been found, so Calvin is a pioneer of sorts.
Somehow, reports about this lobster, now a resident at the Rhode Island Biomes Marine Biology Center, also mention Gerard de Nerval, a French artist who lived in the 1800s. According to a Guillaume Apollinaire comment that somehow survived the time, Nerval used to walk the Palais-Royal gardens with one in a leash, which he kept as a pet named Thibault.
We wouldn’t go that far in the past to find a suitable (to us) cross-reference. Ours is Willow, a calico cat, who showed up in New York last September and who, as it turned out, had disappeared from Bouder, Colorado, five years before. Her human companions, trying to make sure she wouldn’t get lost, implanted a chip in her, to help locate her. So much for high-tech, right? 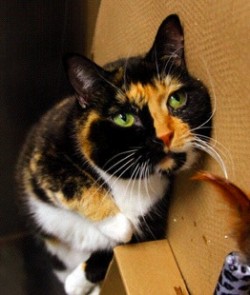 Who goes to that extent, anyway, when the cat, herself, proved that one way or another (to this date, no one knows how she landed in the Big Apple, but there are theories, of course), she knew how to take good care of herself. As many people who have been arriving in the city for over a century, the first thing she did was to change her name to Molly. Who knows? Willow is perhaps too countryside-y.
After a frantic and peripatetic search, she went back to Colorado and as far as we know, she doesn’t miss a bit any of the Broadway musicals many travel out of her state to see in New York. So, as you can see, we don’t need no stinking French poet to establish our own connections. The only thing is: with felines, at least, calicos are always female. Apparently things change when it comes to lobsters. Wouldn’t you know it?
Now if you’re wondering how come we went from the story of three colorful, crusty amigos to the story of a traveling cat, you haven’t been paying much attention, and that’s fine. After all, it’s Caturday.
____________
Read Also:
* The Ablest Catch