Job Offer in Sri Lanka
& a Profession to Kill for

It’s the economy, stupid. If we could get a call back for each time we’ve heard this blunt, over the top, and not very polite expression, well, we’d probably grasping our cellphones real tight just about now. Or checking foreign job boards, for better offers. And we mean, far away from our borders.
In Sri Lanka for example, where they’re looking for two good men. You must relocate, though, and the food may take some getting used to, but it’s a hands-on position, and demand for the required expertise is very high. Oh, by the way, the candidate must know how to hang people to death.
That’s right, the offer is for an official executioner and an assistant, who’re expected to face a backlog of over a thousand death row inmates, waiting for their sentences to be carried out. For that, you may not need to speak either the Sinhala nor the Tamil languages; hand signs would do, apparently.
You may be surprised that, at this day and age, there are still a number of government-paid jobs for professional executioners, but you shouldn’t; even in the most technologically advanced societies in the world, such as France and England, only recently the profession has been officially abolished.
In the U.S., as you probably know (and we hope, not from personal experience), prison wardens are usually assigned to the operation of government-sanctioned death methods, and hardly anybody is hanged any longer. Abstracting from moral considerations, it’s an occupation as any other.
Problem is, it’s virtually impossible to take the moral out of the equation of sending people to their death. But the person who ultimately carries out the deed may be the least responsible to the unfortunate chain of events that leads a human being to be killed by a decision supported by his or her own peers.
A HAZARDOUS OCCUPATION
At the end of the day, however, being either a Sri Lankan government executioner, or a U.S.’s prison guard in charge of administering a lethal injection to someone, is indeed, a risky proposition. We honestly don’t know about what’s being offered over there, but in this country, salary and benefits are just OK, if you ask anyone.
Meaning that for

many Americans, no amount of money will make them apply to a position that can corner them into a moral quagmire. In theory, of course. The increased privatization of the U.S. prison system adds a new twist to this equation: as crime and punishment becomes profitable, it may trivialize the judicial process. And that’s already happening.
For brief four years ending in 1976, capital punishment was banned in the U.S., but no reliable data has shown that criminality has increased or diminished in consequence of the ban, or its lack thereof. Even now the debate rages on about the morality and effectiveness of the death sentence, and not only inside the 33 states that support it.
We’re currently in one of those periods when there’s hardly any discussion about it either way. Many people prefer to focus on due process, when the system fails, and how it can be improved. Some stats about the U.S. judicial system, though, may show that it may be arguably failing more than helping us as a society.
Many with a more nuanced view of the issue would support the death penalty in some instances, but not in others. Serial killers, and child molesters, for example, specially members of the clergy, or those who enjoy a position of authority, seem to be fair game candidates, for those who don’t quite approve society’s right to sentence people to their graves.
Whether someone deserves or not do die shouldn’t be the concern of anyone in charge of their sanctioned fate, of course. The job offer in Sri Lanka does not specify whether you’d get to wear a mask, or have a security detail at your disposal, but it’s a safe bet to assume that it’s not part of the deal. 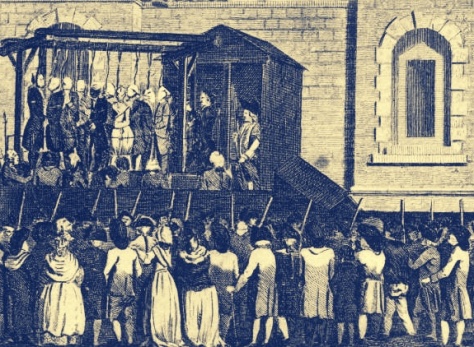 LIFE & TIMES OF FAMOUS HANGMEN
In case you decide to give it a shot, though, it’s always instructive to educate yourself about those who came before you, and how they’ve fared in their own societies. And, perhaps not surprisingly, some did quite well indeed, despite not being particularly beloved by their people (no wonder) or celebrated in song and dance (would you know it?)
Take William Calcraft, for example, billed as ‘England’s most famous executioner of the 19th century,’ according to Wikipedia. In his almost eight decades, he helped some 450 people depart from this world, some in particularly harsh fashion. A cobbler by trade, this crafty fellow became known for his short-drop method of hanging, designed to cause extra pain.
As it happens today in many countries, public executions were attended by thousands in Victorian England, and Calcraft’s antics at the top of the gallows may have assured him the ghastly notoriety he probably enjoyed. The hanging of convicts proceeded in the U.K. until 1964, albeit since the late 1800s, it was no longer a public spectacle.
Unlike the British, the French did not hang people: since the revolution, they preferred to decapitate them using the guillotine. The last official executioner was Marcel Chevalier, who managed to have his name remembered over the many he helped separate from their heads, including the very last one, in 1977. The guillotine was formally retired in 1981.

In the U.S., the list of executioners includes many electricians by trade, because since the beginning of the 20th century, Thomas Edison’s electric chair has been a national choice. It took some adjustments, though, and many were fried before dying by electrocution in the devilish contraption. Despite the er, popularity of the lethal injection, the chair is officially still in use in some states.
Wikipedia lists two American executioners who were hanging specialists, and both were present at the last moments of a group of individuals that still today lack any sympathy for their fate: Nazis. John Woods and Joseph Malta executed many of them, including the top 10 leaders of the Third Reich, in Nuremberg in 1946, for crimes against humanity.
So, if you’re still considering moving to Sri Lanka, may these two Americans serve you as an inspiration. After all, somehow they caught up with a good part of a historical event, that was brutal, cruel, and completely unfair to millions of people. They got to be the instruments of justice, albeit imperfect, for those who had done terribly wrong.