Hold the I or Indulge on Us;
Agonizing Over Who’s Speaking

Now let’s talk about at least one thing we really dislike about us. That’s exactly it, this idea that using ‘us’ makes our writing more compelling, or less self-indulgent, or a bit more inclusive. It doesn’t, we knew that from the beginning, and now we’re having a hard time going back on it.
It was a conscious decision, mind you. The rationale behind it was that, since the fiction you find elsewhere on this blog is written in the first person, news stories shouldn’t have so much of a personal focus, a narrator if you’d prefer, lest not the content be taken over by the voice.
There’s no way around it, it was pitiful mistake, just like any other on this site: full of lofty ideas of making it all about the reader and not the writer, and winding up being all about the modifiers and not the subjects. Guilty as charged, there isn’t any formula to make this less than another exercise of vain righteousness.
The idea would be then to walk back into that original, and faulty, premise, if not for anything else, then for the fact that everybody hates those insufferable pretentious dopes, who like to refer to themselves in the third person. How come this became a pertinent issue is a matter of contention.
It’s also well understood how flawed such an undertaking can be, that of deconstruct a device used for over two years to basically, let’s face it, mask the real problem: we simply don’t have much stomach to keep using the I did this and I did that. Mainly because we usually don’t do either.
So, here we are, and we mean everyone who’s still with us at this point, knee-deep into a muck of pretense about form, and probably already wise to the fact that, lacking a certain knack for a good news story, there’s not much there, now is there? You, of course, will be the judge.
It was also, let’s be fair, an idea that not just seemed good at the time, but also served well the purpose of, well, repurposing the news of the day with a humorous tinge and a slight slant towards 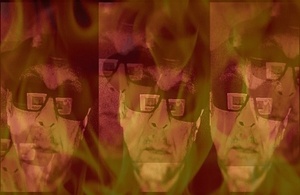 the potentially overlooked detail. After all, there wouldn’t be any point in rewriting someone’s else report.
Somewhere between that noble, albeit arguable idea, and the end result, which was the excessive use of the plural voice, a lot of common sense got lost and wasted. There isn’t any packed newsroom behind ‘us,’ neither the tamed clickety-clack of well-paid professionals lending their talent to this show.
On the other hand, no one would’ve put up with the 1,100-plus posts currently on file, if they were all narrated by a blind ‘I’ either. In fact, this obsession with the confessional, and the need to share the deep end of our psyche with the world has always given us a case of violent skin rash.
Somehow, it became common currency among bloggers to delve into the personal and the intimate, and to aim at turning any private thought or action into a porn favored by some imagined mass audience. Which, again, can drive many of us (and here it is, again) into pulling up handfuls of hair.
Believe it, it’s so much easier to tell you about a cat, or a misplaced elbow at the Lost & Found. To rant about the environment, or to push some cultural wares. The truth is, despite the more than a thousand pieces, most articles we’ve posted suffer the lack of more voices, to truly convey the world as we see it.
But alas,

writing can be as ungrateful as hammering hot iron, and unforgiven as carrying rocks up a mountain; at the end of the day, your fingers burn, your arms ache, your tongue is dried, and still there’s no building to speak of. We find that even when using the I, there aren’t any redeeming sayings to cap the shift.
I’m afraid it’s pathological, but I simply can’t start most sentences from my utterly broken point of view. That’s why I’ve enlisted, to no avail, the help of us. So it’s been us for this, and us for that. But in the middle of the night, there’s just me, or no one, really. What’s been said will hardly make it to posterity.
We gave it our best shot, though, and you can take that to your own future. It’s simply not within our reach to succeed on this matter. Which is now bound to be unsettled for life. Perhaps every once in a while, we’ll keep an ‘I’ for emphasis or to prove a point. But for most of the time, there can be no story if it’s not with us.

One thought on “The Unconfessional”