Never Mind Gadgets; These
Inventions Can Save Lives

Truth to be told, the kind of invention that gets all the press is the one people carry in their pockets, the smart gadgets that some awkward college grad developed as his pet project. They’ve got us all by the tip of our fingers, and we can’t even lift our heads to avoid traffic.
To be honest, we’re not impressed. What gets us going is something invented to get people to share. Like a billboard that turns air into water. Or an ocean salt-remover machine. A circulating shower, or a food production unit. For these, we gladly bow our heads in awe.
We love our precious little things, make no mistake about. They supply and compensate for our companionship and reassurance needs, even though in reality they give us neither. But, to paraphrase the old saying, what we create out of necessity has a much better shot at bring us together around the fire.
Even the concept of inventing something depends on a number of qualifiers. The U.S. Patent and Trademark office is one of the busiest of the world, but the majority of contraptions and devices that surround us are arguably products of a long development process, not of a single, ‘Eureka’ moment.
With due respect to the amazing inventors who simply can’t help it but to constantly create all sorts of ingenious setups to make our lives easier, they rarely match the romantic idea of the solitary genius who changed the world out of his garage. Mostly, they create a better toothbrush.
That also can be said about the computer, the electric car, and the smartphone. As great as they may be, they’re far from cutting edge science, and their developers are just that, not particular inventors. Also, as they’re assembly-lined to fulfill a need they’ve created in the first place, innovation is incremental, at the most.
We’re not dissing the intrepid, incredibly bright, and at times, visionary group of very special individuals who help make this world such an arresting place. But until the gadgets they’re creating are ready to migrate to the insides of the human body, they’re still only improving on what once was just a better mousetrap.

THE WATER BILLBOARD
It almost never rains in Lima, Peru’s capital. But the humidity year-round can easily reach 98 percent, so you’d be soaked just walking around, and an umbrella would still be absolutely unnecessary. So you can see where we’re going with this, right? water shortage is a big problem for Peruvians.
Enter the University of Engineering and Technology, which partnered with an advertising agency, Mayo DraftFCB, to develop a smart billboard, loaded with sensors and humidity-trapping generators. These devices attached around the billboard filter moisture captured from the atmosphere and stored in tanks as potable water.
The best part is that this water is free to the public. In three months, almost 10 thousand liters of water have been produced, to great benefits to Peruvians of all walks of life. As we said, we love our clever gadgets, but an invention like this has so much more social relevance to shame us and our spoiled-little-brat fits about our stolen phones.
FROM OCEAN TO YOUR GLASS
Nature is a great recycler of its limited resources, and water is a big example of that. Even organisms that have been extinct millions of years ago have used the same water you use to brew your morning coffee. The big twist is that most of the water found on Earth is salty, not suitable to consumption.
Up to recently, separating salt from seawater was expensive and energy-consuming. Now the wizards at MIT may have devised another way, which makes the process much more cost-effective, and accessible to communities chronically plagued by lack of fresh water. Such communities, of course, would be the least interested in how MIT’s is a different method.
But since discriminating folks such as yourself would like to know, it’s quite simple, really. Jeffrey Grossman and David Cohen-Tanugi found that using sheets of graphene, a one-atom-thick form of the element carbon, for the filtration, instead of membranes, which are a thousand times ticker and are used in what’s called reverse osmosis.
Many freshwater-depleted countries have been trying for many years to extract water from the sea, for consumption and agriculture, but costs can be high, since the osmosis method uses a great deal of energy to ‘force’ water through the filtration. The MIT system may become the procedure of choice to such nations.
Other ways may come along, and none too soon. Being vital to our survival, freshwater is particularly vulnerable to climate changes, and to the widening gap between the Haves and the Have Nots. Desalination may be just the ticket to buy us a few more centuries, before Nature decides that we’ve done enough already, and vote us out of this island. 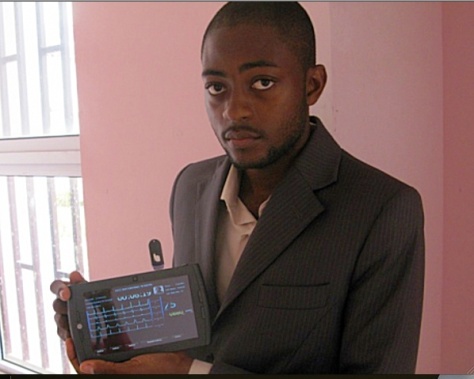 SHOWER, HEART & HUNGER
2012 was a particularly fruitful year for inventions with direct applications to the welfare of impoverished communities. Some time ago, we told you about the machine developed by four African teens, that turns urine into electricity, which is a huge step into much sought-after spirit of self-reliance of entire African communities.
Peter Brewin, an industrial-design student at the Royal College of Art in London, created something similar: a water-recycling shower, that filters some 70% of the water that would otherwise be wasted down the drain. Proving that demand for concoctions that make better use of water are on the rise, his work has already takers.
Arthur Zang, a Cameroonian engineer, created a digital tablet known as Cardiopad, that’s elegant and simple in its conception, and yet, highly appropriate for the vagaries of his country’s medical system. Heart patients, who often have to wait months before a doctor’s appointment) are often on the go, and the pad helps them monitor their bodies.
And finally, there’s the Solar Grow 1 (SG1), a food production portable unit created by Alexander Bushell, that fits a shipping container and it’s fully habitable. The most important thing about it, though, is that once on a site, it starts immediately producing food from the local resources found on the soil. That includes analysing the ground and laying down the seeds.
And that’s what we meant by community-oriented inventions. What, we didn’t write this before? Never mind, what counts is what’s more or less common among all these above-average inventors: they all dedicated time and effort not exactly to develop stuff according to market demand and profitability, but to cater to real, specific human needs.
_______________
Read Also
* Quantum Leak