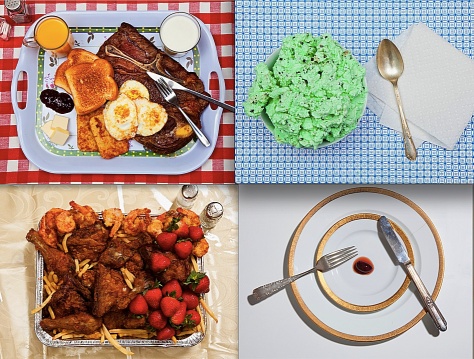 A Food Fight We
Are Born to Lose

There are many incomprehensible and cruel things about capital punishment. Perhaps no one is more ironic than the last meal, offered to the death-chamber bound. Then again, depending on the circumstances, nothing tops grabbing a bite at a crucial moment.
There are memorable meals and those that people gather from a dumpster. There’s the soldier’s ration, and the Bring Your Own Food kind of dinner. Many have had enough and are now morbidly obese, and then there are the millions who simply won’t eat anything tonight.
To have and to have not is the great divide that sets apart the thoroughly satiated from the miserably famished, regardless their personal merit or scale of necessity. In the end, hunger is not equal to food shortage, but consistently failing to eat can doom us all equally.
Between the tasty top, where superstar chefs and molecular cuisines pamper the palate of the powerful, and the bleak bottom where the next meal is less certain than death by starvation, swims the still majority of humans to whom food time equals to conviviality and fun.
Unrelatedly, William Duffy had a valid point about a soldier’s ration, on his book Sugar Blues: both Alexander armies and the Vietcong had similar sweet-free diets. For him, that could help explain the mighty of the ancient Greek and the resourcefulness of the ragtag, tunnel-dweller troops that defeated the world’s most powerful military forces of their times.
Going back to the state’s dreadful habit of sending citizens to oblivion with a full stomach, someone with a twisted sense of parallels may say that a soldier’s meal may be also his last. Sadly, that was the case for many a condensed-milk addicted Green Beret who in 1960s never made it back home from the jungles of Southeast Asia.

NO SECONDS & NO DOGGIE BAGS
As it turns out, even at the last supper, inmates are not usually known for exercising a philosophical restrain and order frugally what will hardly stay in their systems for long. Most will order what’s the best on the menu, even though that coming from a jail’s cafeteria, is setting the bar not too high anyway.
Ted Bundy ordered the steak; Timothy McVeigh stuffed himself with ice-cream. John Wayne Gacy had chicken, shrimp and strawberries, while less-well-known Victor Feguer was the only one not too have too much of an appetite, in which we can all relate in some way: he had a single olive, with the pit. No concerns about chocking either.
We know because photographer Henry Hargreaves took the time to painstakingly recreate their meals strictly according to prison records. And so did James Reynolds, albeit coyly omitting identities. Their work goes beyond the merely gory, of course, and holds the ability of transfixing the viewer with an odd feeling.
So does Thomas Demand‘s, who explored yet another corner of our obsession with celebrities: he recreated not just the last meal but the whole table settings and ambiance where singer Whitney Houston spent her lonely last moments on this earth, two years and a month ago. It’s a poignant homage, even if it omits the gritty side of her demise: the tools of her overdose.

DINNER & A MOVIE
Then at the other end of the spectrum, there’s the celebratory menu, such as the one consumed at the first Oscar ceremony, in 1929: Terrapin soup, jumbo squab Perigeaux, lobster Eugenia, L.A. salad and Fruit Supreme. No pizza for that crowd. And in case you wonder, Wings, a silent movie with Clara Bow, won the award that year.
History also recorded what was eaten when the Beatles met Elvis Presley, for example – broiled chicken liver wrapped in bacon, sweet and sour meatballs, deviled eggs, cracked crab, cold cuts, fruit and cheese – and what Neil Armstrong, Edwin Aldrin, Jr. and Michael Collins ate on the moon (you don’t wanna know; it was all dried up).
We also know (even without ever asking) what Marilyn Monroe ate while posing nude for a photo shoot – a bowl of chili – and a multitude of meals, snacks and breakfasts that presidents and celebrities consumed at one time or another, deemed fit for the record of posterity.
Given that we know so much about those, it’s really a shame we have no idea what close to one billion people will be eating in the next 8, 12, 24 hours or even in their lifetime. Since it’s very likely that it’ll be nothing or close to it, it’s fair to ask, since when that’s no longer as important as what Justin Bieber has in his fridge?
DUMPSTER DIVING
For even more people, the possibility of eating food that’s been considered no longer fit for consumption has become a valid alternative.

In fact, there’s a whole growing movement, advocating an end to our wasteful ways of serving a few, while starving millions, by rehabilitating foods passed their expiration date.
As entrepreneurs may tap into this ‘market’ of the semi-starved, it’s undeniable that such opportunistic drive has its share of good intentions built in. Food waste is arguably one of the greatest disgraces of our societies, and even if no one should have to resort to diving into dumpsters for their next meal, those who do it do us all a big favor indeed.
However you get your sustenance from, being from a gourmet boutique in New York’s SoHo, or the backdoor of a supermarket, among the garbage, there will be soon places to eat where you need to bring your own. They’ll offer the settings and likely, company, presumably for a small fee, and you take care of yourself.

ALL CHOKED UP
The dream of streets lined with edible fruit trees, and vegetable and grain crops raised on rooftops has, unfortunately, eluded us so far, either for practical aspects of location and regulation, or because in the city, everything becomes too damn expensive, both to entrepreneurs and consumers alike.
So if you think that it’s silly that some would choose an elaborate three-course meal on their expressway to the Big Sleep, consider that many may follow them just on the account of having one day fought too hard to get a meal, and committed a crime in the process. In both ways, their problems, unlike ours, will soon be over.
Those still weighting on the price of their dignity, and of their families, against the desperate human need of feeding themselves, may find that all a phony quandary. All they may need to know, at least for now, is whether you’re sure you’re going to finish those fries before dumping them in the garbage bin.
_______
Read Also:
* Expiring Dates
* Live or Die by Mouth
* Ketchup With That?