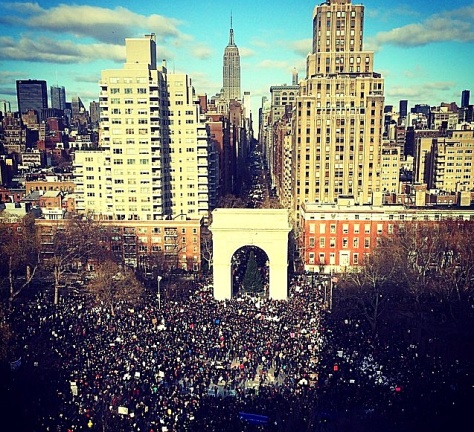 Once again, Americans of all colors and ethnic backgrounds stepped out and made a statement against police brutality, in favor of justice and the rule of law for everybody, and above all, in defense of black and minority people, disproportionally singled out by law enforcement.
They’ve carried posters and banners with the names of Eric Garner, Michael Brown, Tamir Rice, and so many others, including Amadou Diallo, killed by New York cops over 15 years ago, and marched along the victims’ families, in yet another giant, peaceful demonstration.
Many lessons of civility and compassion were on display, many examples of courage and solidarity. This time, change must be expedited, and justice ushered by those entrusted with the people’s will. Their voices won’t be ignored, and their sacrifice won’t be in vain.
In the past few weeks, Americans have shown more determination to redirect this country towards social and racial justice than they’ve been in years. It’s now up to President Obama to validate these legitimate claims in the letter of the law, so we all can finally move the U.S. forward into a new era of civil rights for everyone.