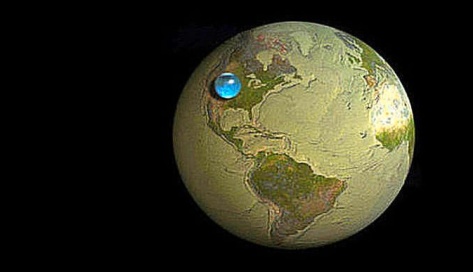 Why on Earth Would This
Planet Need Only One Day?

Let’s get this out of the way: I dislike Earth Day. It wasn’t always that way, but now some sort of sanctimony is definitely attached to it, and it gives me the creeps. So much so that I’m forced to write on the first-person, as if my opinion is even remotely required.
Still, I’m not knocking the merits of having a day, a focus to draw attention to what now seems more than ever a lost cause. After all, prior to its inception in 1970, the date had a noble origin, as it used to be celebrated as Arbor Day since the late 1800s.
But after 45 years, Earth Day means a lot of things that I despise about our species. And weeks before it, I always find myself wishing that the planet would react against all we’ve done to it, and get rid of us already. I’m sure it’d stand a better chance of surviving.
Not just this speeding piece of blue rock, but every other being living on it. For the more I read about depleted resources and long-term damage, regardless if by land or if by sea, the closer I get to capitulation: to hell with us and our self-appointed (and illegitimate) ownership title over Earth.
It’s your right to disagree, of course, and if the subject is threatening to overcome you with doubt and grief, feel free to join the parties set all over the world to mark the occasion. I hear that some people may even wear flowers in their hair, just like as it was back then.

WHITE LUST, BLACK MARKET
But just a shallow skimming of environmental news from the past few years (not even an eye blink if you were a planet) is enough to give me a hangover and getting me back under covers for the day. What else can I say? somehow, sometimes, I just can’t handle it.
Have you heard of the very last male Northern White Rhino, that’s been under a 24/7 watch by armed Kenyan guards? Well, just ask how much those rangers make, and you may guess how much the rhino will last. What about the current rate of 100 African elephants killed a day?
Both species are being felled by the estimated $1 billion a year ivory trade, which also victimizes other animals, and produces absolutely no essential goods whatsoever. It only feeds vanity, luxury, and the stupid myth that it boosts male sexual prowess. Dignity, where art thou?

GETTING BACK TO THE BRINK
Just on cue, Elizabeth Kolbert won this week the 2015 Pulitzer Prize for Nonfiction with ‘The Sixth Extinction,’ which analyses in depth the role of mankind in the elimination of the largest number of species in the planet since the Dinosaur age.
That we’re driving so many species to extinction is clear to anyone not currently sponsored by the Koch brothers. But what’s staggering about this realization is that since the previous mass die-off, 65 million years ago, one of the last species to show up is already responsible to commanding the next.
In this terrifying context, it makes absolutely no sense for the National Oceanic and Atmospheric Administration (NOAA) to propose the removal of yet another majestic creature from its endangered species list: the singing humpback whale. For what? So we can eat them too?

I SEE FIRE (BUT DON’T SEE RAIN)
Speaking of the atmosphere (I’m trying to slow down but I can’t skip this), two years ago we’ve reached a somber milestone: the Mauna Loa’s U.S. greenhouse monitoring site, in Hawaii, registered carbon dioxide levels of 440 parts per million in the air for the first time ever.
Well, we’ve just managed to break that record too. That’s because that occurred in May of 2013. Last year, it did in April. But this year, the same level was reached in February, which means that it’s accelerating. And this time, don’t count on the Amazon to lessen the blow.
Global warming is becoming more visible, and irrefutable. Again, unless the Kochs are your bosses, you know what that means. There’s compelling evidence that the droughts and water shortages in California, China, India, and Spain will soon spread out to other regions of the world. And let’s not even get into fracking.

STILL SHOOTING THEM, AREN’T THEY?
Ready to join me under that blanket yet? No need to be so depressing, I know. After all, there’s still beauty and birds and butterflies and bees and, ops, bees are actually under threat of extinction too. And you know what they say about birds and bees, don’t you?
But as I was saying, there’s much to be hopeful about too. I’m just not the one to embark on platitudes about the redeeming qualities of the human species. We like to tell ourselves that the animals wouldn’t be able to survive without us, but that’s a gross misrepresentation.
We’re not shepherds, we’re devious Pied Pipers, leading species after species to their early graves, along with our own children, and their unborn kin. So much for singing the praises of the our ingenuity, which, granted, is really admirable. But come on, at that rate?

GET A GRIP & LET’S ALL GET STONED
And the speeches, oh please, don’t let me hear them making sermons on my behalf because, honestly, I’ll puke. They can shove their marching bands, and their grandstanding, and their earnest quotes about the future of the Earth. With that kind of preaching, it’s a wonder more people aren’t mad already.
I hope I’m all wrong. It’s happened before. A lot. I say something and the opposite comes about. I pick the numbers but all I get is, Sorry, You’re Not a Winner. It’d be a time to be OK with being wrong. Just like watching soldiers returning home, this time for good.
Coming to think of it, that’s what I’ll probably do. I’ll put some fresh clothes, comb my hair for a change, shave, and go see the world. That’s fitting for a day they name after Gaia. Or Terra. Or the only place that has ever shown us kindness.
I was resisting a sentimentalist ending, but who am I? Some kind of visionary? Nope. An idealist? No longer. Someone with a sunny outlook? Wrong again. Damned it, who am I? Mistaken, of course. So let me be it once again. Perhaps that’s all it’d take for everything else to be alright. For a change.
_______
Read Also:
* Horned & Dangerous
* The Whale Report
* Wildlife Behind Bars

2 thoughts on “The Third Rock”