Pick a Day & Give It a Spin,
So Life Won’t Grow Too Stale

Calendars would be a 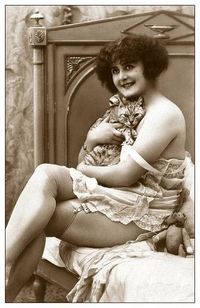 boring way of marking time if we didn’t assign each day with a different meaning. In fact, some days no longer fit within a regular sequence of numbers and need to be movable, so to fulfill their main function: making us forget the inexorability of time.
Then again, holidays, specially those named after people and events, are also boring. Thus the wacky dates we pick to honor an odd occurrence, or a rare fetish, even an artifact made memorable by a work of fiction.
Tomorrow is Hug Your Cat Day, for instance. In the U.S., pretty much every day of the calendar has been appropriated, often unduly, by a war battle, a religious imperative, or perhaps worst, an industry seeking exposure. Boring, boring, boring. And let’s not get started with those for which many make a wise point in skipping altogether.
But finding a way to make a day feel different – apart from the reality that, indeed, no two are alike even though it all feels the same to most – is not an American monopoly. Around the world, people memorialize the weird, the bizarre, and the quirky, as if their hold on life depends on it.
It’s also human to name things, moments, even parts of one’s anatomy. It all fits within the confines of that other inexorability: sameness, or our fear of succumbing to it, and disappearing without trace. Which winds up happening any way, in one way or another.
But some of these out of the ordinary dates extrapolate not just that sameness, but also the 24-hour expiration time of each day, either spilling into a festival, or taking place at different places, so to make sure everyone gets in that opportunity to stand out.
Curiously, festivals such La Tomatina, which is a late August movable feast that looks like a pagan orgy in red, have the exact opposite effect: who can be singled out in a sea of bodies digging in the mud of smashed tomatoes? So much for a collective longing to be unique. 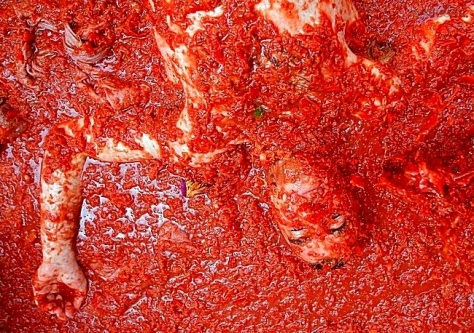 A DAY TO NOT STAND STILL
But mostly, whacky holidays are created in the spirit of fun, including the Indian Cow Procession Day (Nov.8) or the Thai Monkey Buffet Festival (Nov. 28), despite their sanctimonious pseudo-homage to animals. In the end, they could as well dive into the mud just for the sake of it.
Others, if not spectacularly dull like Ditch New Year’s Resolutions Day (Jan.17), are at least kind of sophomoric such as Pillow Fight Day (April 4). And then there are those loaded with political correctness, such as the Buy Nothing Day, a nemesis for the ignominious Black Friday. No fun.
Of course they don’t come close to the ominousness of Meteor Day (Nov.6, and you know what it means). Instead, the rest of us would rather side up with the jocose, semi-fictitious Festivus (Dec.23) and, just for good measure, be totally, unwaveringly biased towards Global Orgasm Day (Dec.22).

IF IT QUACKS LIKE A DUCK
A favorite of quirky minds, and perhaps one with the best subtext among our mundane ephemeris, is the upcoming Dead Duck Day (June 5), which marks a scientific breakthrough: the ‘first case of homosexual necrophilia in the mallard.’ The back story is funnier than that, though. 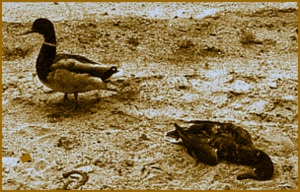 It all started in 1995, when a male duck crashed against the glass wall of the Rotterdam Natural History Museum and died on the spot. Then, to the astonishment of everyone, another male mounted the corpse of the bird and proceed to copulate with it for 75 minutes straight!
The unusual event, and origin of the quacky, er, whacky holiday, made the history books through Kees Moeliker, a writer and biologist at the museum, who published his observations and was awarded the famed Annals of Improbable Research‘s 2003 Ig Nobel Prize.
The now historical collision’s 5:55pm precise time is also part of the record. And, of course, the embalmed body of the duck that ‘has ceased to be,’ (quoting Monty Python‘s Dead Parrot hilarious sketch), which has been on display at the museum ever since. Just don’t confuse all that with the lame Lame Duck Day (Feb.6).

NO PANTS, UFO & CONDOM BLOWING
By now, we’re oh, ever so jadedly, fully acquainted with the quirkiness of April Fool’s Day and its mostly spent possibilities, or the cyclical rarity of Leap Day, a 24-hour period full of extra meaningless seconds at the appendix of February. So one would think that this is it.
But imagination does make a cloudy day sunny, paraphrasing the song, and who says you couldn’t come up with the perfect, thought-provoking, and fun special holiday, to mark whatever the hell your fancy takes you. Speaking of that, there must be a Make-Your-Own-Holiday already invented, right?
For haven’t they already created a day for Underwear (Aug.5), or its variant, the No Pants (on the subway) Day (on the first Friday of May)? A World UFO Day (July 2)? Check. Dance Like a Chicken (May 14)? Check. Condom-blowing matches during China’s Qixi Festival (sort of Valentine’s Day on May 20)? Check that too.
So why not creating your own too, right? But some principles come in handy. Rule #1: don’t be a stupid Hallmark. Also, there are enough days for people, and industries, to self promote, so anything like Sleep With Me Day won’t probably stick and may bring up plenty of sexual harassment suits to boot.

THE MOST MASSIVELY USEFUL THING
Lefties have Aug. 13 to themselves, and so do annoying Trekkies and Star Wars buffs. Stay clear of a Big Lebowski day; it’s been already created and it’s a 2-day feast (July 10 & 11). And if there’s one more ‘special’ day dedicated to eat, we promise, we’re throwing up.
But there’s another quirky day that every year, since 2001, has been a delight to follow, for its humorous take on utilities and personal hygiene, convenience and interstellar travel: Towel Day (May 25), a time to heed Douglas Adams wise notes on such a useful piece of fabric.
Adams, who passed away two weeks prior to the first Towel Day, left detailed and illuminating observations on the practicalities of carrying one at all times, which included, of course, the possibility of drying ‘yourself off with it if it still seems to be clean enough.’
So, whether you have some brilliant idea to set up a special day for it, hoping for a time when it’ll be adopted by millions, or you’re just content with what you have, pick a day and pretend that its contents are all that counts for your life. For at least the next 24 hours or so.
_______
Read Also:
* The Heavenly & the Disturbing
* Quantum Leap