Flexing Your Exquisite
Skills For Being a Gifter

It’s finally here (and you know you want it): our Peculiar Gift List. But why, you ask, another list of presents for other people, (instead of the ever more fulfilling one of things given to you)? Hasn’t the insanity of being nice run its course that time when all you’ve got was a lousy pair of socks and a 3-VHS package?
We’ll get back to you, you Grinch,

but this year’s selections got you covered. Jesus Freak uncle? Check. Crazy nice aunt? Check. Serial killer trinkets? You’ve got it. Sure, you won’t please everyone, but they did give you the finger then, right? At least you’re not poisoning them or something. Just proceed with caution.

For that was that time when the little girl next door gifted you with her oh so cute drawing, and you got caught cold-sweating bullets. Her precocious rendition of your backyard, which impressed everyone, scared your shitless. That evil glint in her eye was a message.
As if saying, I saw you dragging that body out of your back door, the other night, and you thought no one was watching. Well, I was. That warning was all you’ve got, but who knows? What if this time she’s coming for a payback? Better be prepared. Hence having a handy list.
Dying people have their buckets, but yours is for protection. Just when they come for the killing, you stun them with a nicely wrapped memento. It’s the thought that counts, remember? Or the message. But just in case, don’t turn your back on her. And calm yourself down already.
Above all, it’s a list custom-made for the regifter at heart in you. As long as you’re judicious redistributing the goods, you’ll be fine. Oh, and don’t forget the scorpion vodka, the snake rum, and the 5-hour Darth Vader Yule Log playing on TV to set the mood. Go ahead, be merry.

FOR THE NICEST CAT LADY YOU KNOW
She’s spent the whole year forwarding you all sorts of links about silly, intriguing, and slightly disturbed cats. You even thought about a fitting revenge, but in the end, couldn’t be mean to your sweet aunt. Result: a bottle of cat forehead-scented Fluffy Fragrance Fabric Water.
She’ll love it. It says how much you care about her, and how nice would be for her to drown on the scent of her own multiple kittens. Who, of course, won’t care less. You know, cats. Still, you’ll impress the party. Or get all sorts of weird stares. Congrats.

HANDLE THE ‘JESUS MILITIA’ SUBSCRIBER
Family gatherings are always tricky, but the table clears ever so quickly when Uncle Bob starts talking Fox News politics. There’s always one point when you’re left on your own to defend lesbians, gun control, legal abortion, and Obama. But this time, you’ll win.
Give him the ‘Dancing With Jesus‘ DVD, and watch his face light up like the gun-themed Christmas tree you know he’s spent hours putting together at his place. Keep a straight face and you’ll see him (more)
_____
Read Also:
* Last-Minute Gift
* The Most Wonderful Time
* Holiday Fare

heading to the Rec Room not to be seen for at least a few hours. Well done.
TO YOUR LOVELY VEGAN/GOTH NIECE
It’s time to clean up your relationship with this young lady,

before all she’ll remember of her self-indulgent uncle will be arguments over her taste in food, music, and mates. After all, she may be the one they’ll bother calling, once your wasted body finally gives up.
As a parting gift on her way to college nothing will say, now I get it, like the Blood Bath Shower Gel. It’s intimate without being creepy, and gives her a conversation opening for those hard moments when she’ll realize that being a baby was not so bad after all. Perfect. 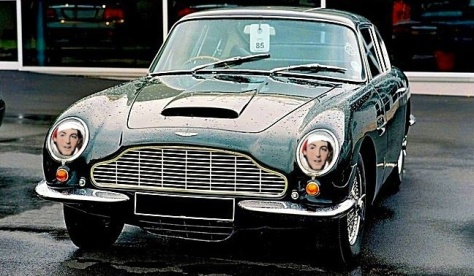 BABY YOU COULD AFFORD THIS CAR
When Wall Street hit the fan, he profited. When half the middle class fell under, he still came out looking rich. What do you give to that one relative you hate with a political conviction, and can’t help thinking about murdering? What, give him a challenge he can’t refuse.
Open it up by telling him, in your most Williamsburg-hipster ironic way, not to carry the world on his shoulders. For Paul, the man who wrote those verses, did it so sitting pretty on his hand-built Aston Martin. Finish him off adding that’s now up for sale. See his lips twist. Savor it. 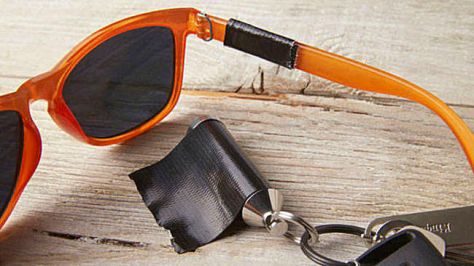 FOR THE SERIOUSLY COMMITTED
You’ve always suspected your brother-in-law hid something that could break your sister’s heart. All those night trips, sudden mood swings, the Dexter Series Set he gave everyone last year. There’s definitely something about the guy. And what’s up with those lose keys?
Now there’ a way to find out: the Duct Tape Key Chain, with ‘an emergency stash,’ is the kind of item that even psychopaths lose it for moment over it. As the family admires your keen skill at gifting, carefully study his reaction. But give nothing away; you don’t want him to know that you know. And keep watching over your shoulder.
TWO MORE LAST-MINUTE STUFFERS
With such a dysfunctional bunch, one never knows. Specially you. So just

in case, pack a couple of peculiars on your way in. The night may turn into a disaster, and you may have to improvise. It’ll reinforce that idea you’ve been trying to sell about yourself, with little success so far: you are thoughtful.
Give the Black Doll to the book worm you always forget about until it’s too late, and the Face Candles to practically anyone, really. Plus, it’s all ideal for regifting. And that’s it, you’re done being memorable. Now just disappear down the Rec Room and let Uncle Bob teach you some steps. Merry Merry.