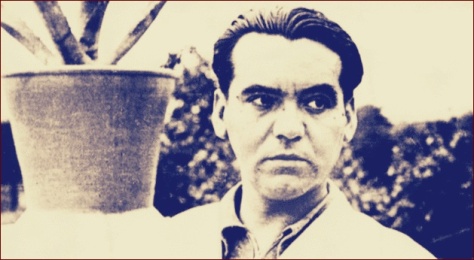 Lorca, the Voice of Spain
That Franco Could Not Kill

‘I realized they had murdered me. They ransacked the cafés, the graveyards, the churches… But they never found me? No. They never found me.’ This eerie Federico Garcia Lorca (mis)quote accurately describes what has actually happened for over half a century.
Until the early 2000s, when rumors were finally confirmed that he’d been shot and buried in a mass grave by a Spanish right-wing falange, 80 years ago this Friday, the mystery of Lorca’s demise only compounded to his allure. And his body still remains undiscovered.
In the meantime, the fascist regime that killed him, and ruled Spain until dictator Francisco Franco was finally dead in 1975, lasted too long but not nearly as long as will both Lorca‘s legacy and the world’s acknowledgement of his greatness. His stature has actually increased.
Before we pat each other’s back, though, on the assumption that poets always win over despots, let’s not forget the grim fate of thousands of Spaniard republicans, who were also murdered, but unlike Lorca, were buried along their names, personal history, and ideal of a free world.
While Franco, and so many others, died ‘peacefully’ in their sleep, the tormented lives of those they killed or sent to the gallows left plenty of grief to spare for generations. Luckily for Lorca, who was far from being a political animal, something else was going on for him.

THE GENTILHOMBRE OF ANDALUSIA
Already well known in Spain for his folk-inflected poetry and popular plays, his disappearance spiked interest on his work abroad, and his collection Poet en Nueva York, of poems written during his 10-month-long U.S. visit, in 1929-30, granted him critical acclaim.
Slowly too, the acknowledgment of his homosexuality

has taken a front role in the appreciation of his work. Salvador Dali, who’s believed to have been his lover, had no qualms admitting it, although typically adding that their relation had been ‘very painful.’
In the end, though, regardless of his sexual orientation, it’s on his 20-odd years body of work where answers about the endurance of his legacy may lay. That’s what happens when a life is cut short, but in the case of Lorca, much remains to be savored and subjected to wider exposure.
A DARK PAST MAY PAY A VISIT
As for his death, many are ambivalent about the renewed search for his body. Ironically, it’s the kin of those who fought and perished in the Spanish Civil War that may have at least part of their (more)
_______
Read Also:
* Gypsy King

personal history restored, if Lorca’s bones are ever discovered.
Aware of the powerful symbolism of such find, aging right-wing survivors of Franco’s vicious militias have closed ranks and refused to offer any help to researchers. Which only goes to show how deeply divided Spain’s society still is over its war spoils.
But even if the remains of Lorca are eventually found and exhumed, for all the jolt that it may trigger on the conscience of those who wish that none of that had ever happened, it’ll mean little to dispel the mystery that surrounded his life and untimely death.
An often mentioned quote would be a fitting coda for the end of the first eight decades since the world lost this remarkable poet, as it perfectly encapsulates the arresting passion that marked his writings and loving life: Solo el misterio nos permite vivir, solo el misterio.

2 thoughts on “Aurora in New York”