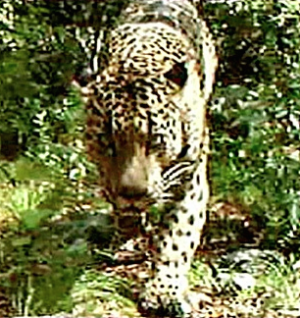 string of wild animal sightings roaming major urban centers is our destructive appetite for the land and resources of their natural habitats. Thus when a mountain lion takes residency in a public park, or a jaguar is caught on tape close to a highway, it’s urgent to study them before they disappear.
Seeing bears, coyotes, alligators, tigers, and many others is becoming common in American and world cities. But there’s something new about P-22, a puma who lives in L.A., and El Jefe, of Tucson and possibly the only jaguar living in the U.S.: the much we’ve already learned about their incredibly rich individual sagas.

No offense to the remarkable little tiger that roams your living room, but these magnificent cats’ ability to adapt and survive offers invaluable insights into our efforts to slow down the extinction their species and of so many others face. Even if, as it goes, their close proximity also shames us to no end.
The ongoing massive man-made extermination of wildlife, which took evolution millions of years to perfect, is not just a tragedy on a planetary scale; it may also turn out to be the gateway to our own quick demise. Good riddance, some of them would say if they could or were born for that sort of thing.
For too long, developed nations have blamed poor (our apologies, Africa) continents for being lax about natural resources and their native animals. But what the fate of P-22 and El Jefe brings home is the hypocrisy of such an attitude, as it exposes our own lack of commitment for protecting the planet.

CEO OF THE UNDOCUMENTED
The footage of El Jefe, whose name was chosen by students at a Tucson school, was is a highlight in a decades-long program to restore a clear path for jaguars between North and South America. So there was due credit given when a remote camera captured glances of the elusive cat for the first time.
But it also happens during a particular hard time for U.S. immigrants. As a misguided administration engages in mass deportations, it also plans to build a wall at the border with Mexico, which would be disastrous to that recover strategy. That is sad but fitting, though, as El Jefe is believed to be a Mexican by birth too.
How it’ll play out may determine whether current efforts to prevent the extinction of species is headed to success or failure. That’s because any effective preservation strategy has to allocate, and protect, large swaths of land, where they can thrive without human direct interference. And that’s tough.
By the way, tough is also the jaguar bite: 2000 pounds per square inch, which relative to its weight is the stronger than all other cats, and also bears, gorilas and hippos. It can crush a turtle shell and it’s no wonder the Amerindian word Yaguar means ‘he who kills with one leap.’

THE BOSS OF HOLLYWOOD
The case of P-22 is similar in what the cat’s endurance is also the result of a carefully laid out plan to drive up the numbers of a genetically diverse population in the U.S. That’s another component of a successful recovery strategy, as it increases their odds to survival.
Centuries of hunting, inbreeding, and the perils of navigating diminishing wilderness patches squeezed by miles and miles (more)
_______
Read Also:
* Farewell to a King
* Pachyderm Skills
* Sleep With the Fishes

of heavily trafficked highways, have been almost always fatal to your kitten’s cousin. And worse, they’ve been perilously pushed toward their worst tormentors: us.
That’s an even bigger problem, as people often react to a run-in with a 200-plus-pound predator in their backyard by shooting them. Fatal encounters abound, and some provoke a curious public reaction: campaigns requesting donations to survivors are often tilted towards cubs over human babies.
Like all wild cats, pumas kill prey by stalking, pouncing, and crushing their necks with a single kill bite. Unlike bears, though, they fear humans, and odds for being attacked by one, even if you’re insane enough to regularly jog through isolated hills and fields, are much fewer than being killed by a cow. 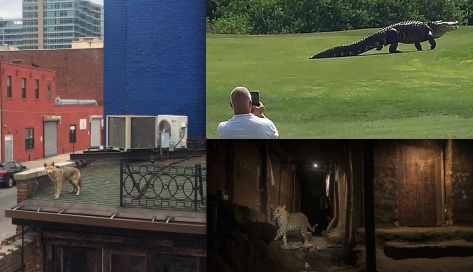 THE LAND WHERE IT ALL STARTED
Africa may be the birth of most animal species, including us, but currently it’s in the U.S. where most big cats live. It’s where an estimated 10 thousand captive tigers live in ill equipped, private zoos, and that’s over twice their entire population in the wild.

Abused, often chained and confined all their lives to small cages, these individuals nevertheless command hefty prices in the multi-billion dollar market for so-called exotic pets. Despite sharing a poor, homogenous genetic pool, traffic of their furs, bones, and organs fuel a powerful black trade in Asia.
Even as major circus are on their way out, like the Ringling Bros. and Barnum & Bailey has announced, and zoos are phasing out wild beasts exhibits, legislation has failed to prevent abuse by wealthy, self-indulging private owners. The only thing that may put them out of business for good is the power of public opinion.
Respect, commitment to protect, and research about wild animals require a changed attitude towards them, and the natural habitats they depend on to survive. As the now famous lion and jaguar thrive, by hopefully mating and multiplying, so should our appreciation for their wondrous existence.