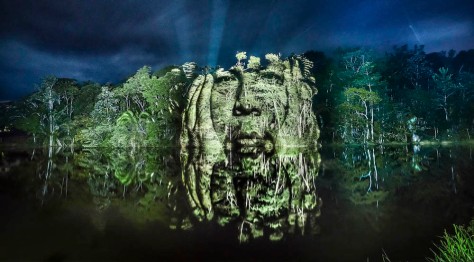 When Colltales started, seven years ago this Earth Day week, the environmental disaster du jour was BP’s oil spill in the Gulf of Mexico. We’ve survived that, but many species haven’t. Now the still living, breathing, exuberant Amazon Rainforest may be where our next big screwup will take place, as proof that little has changed.
We’re still as likely to discover a Stonehenge-like monument, or 2,000-year old earthworks, or a 3,600-square-mile coral reef where the Amazon meets the Atlantic, as we’re to find that our taste for burgers is killing the jungle, deforestation rates are again on the rise, or that the Brazilian president is actually out to to cash in the forest.

Did we mention the neck-breaking pace of murders of green activists? Or the river of flowing boiling water? Nothing in the Amazon is mild or accommodating; it’s either an explosion of millions of still unknown species, or the soul-crushing wildlife and climate change indifference, shared by many Brazilians.
That’s why scientists fear the worst: not just that we won’t get to learn all that’s there for millennia to be discovered, but that today’s staggering beauty and power of the Rainforest will be reduced to a vast desert of its sandy soil, unprotected by the canopy and terminally exposed to the elements.
It’s ironic, then, that a deranged Brazilian conspiracy theory, dear to xenophobic and fanatics alike, is about some secret society of wealthy individuals, that’s supposedly been working to yank the forest out Brazil’s control and ownership. Suddenly, that prospect seem better than the current reality.

Think about indigenous tribes? think again, for it was a cattle ranch foreman who stumbled upon some rocks piled up on a curious position, in what it’s now known as a thousand-year Stonehenge formation, probably built for the same purpose as the one in the U.K. And just as mysterious.
Just like the even older miles of earthworks, geoglyphs as deep as 16 feet and wide as a mile, proving the forest as home to some busybodies centuries before Europeans came to loot it. The discovery opens a new chapter into the history of the Amazon, one that unfortunately we may not get to finish reading.
Nature kept pace with all this human activity, and in unexpected ways too. Where the mighty Amazon reaches the sea, the crash of two powerful forces is long known as the Pororoca. That’s where lies miles of previously undiscovered coral reefs, coated most of the year by the river’s thick mud. Ready for swim?

Not so fast. That juicy staple of American cuisine, now massively popular all over the globe, has something else questionable about it, besides being made of slaughtered cows: its smoky, ashy, scorched-earth rainforest sauce. No other way of putting it: cattle in the Amazon was always a bad idea.
But the meat industry is not the only woe helping clearing the forest: mining projects may deliver another blow to the entire region, if environmental regulations are eased as the Brazilian government plans. Even as is, (more)
______
Read Also:
* Rain (Forest) Check
* Amazing Zone
* Damned Project

mining has already polluted beyond recovery many waterways with mercury and heavy metals.
Not that old foes have stopped doing their part. Slave labor conditions have been denounced in most of the area’s many logging and sawmill operations. Prevented from leaving, workers lured by phony promises of easy cash, are trapped and, for the most part, ignored by the world in their plight.

But the fate of the Amazon as the so-called ‘lungs of the world’ may have been set to run out of air for good last September. That’s when a legislative coup, orchestrated by a corrupt group of politicians, ousted Brazil’s elected president, Dilma Rousseff, and installed Michel Temer as the new leader.
If the former president, and her Workers’ Party, did little to stem the assault on the forest, besides setting land demarcation to tribes and indigenous people, with the impopular Temer things are definitely looking down. Almost on cue, the rate of clearing has since experienced a sharp 29% increase.
Last month, a special committee has moved forward proposals to roll back protections on 1.1 million hectares of forest and national park, with little or no protest. To be fair, Brazilians are already busy fighting Temer’s draconian cuts in pensions, health and education budgets.
As it’s typical with unelected governments, Brazil’s current crop of political leaders has shown no sight that it even cares about the Amazon Rainforest’s fate, considering it an underused cash cow at the most. And they stand to upstage even the most delirious conspiracy nut, as foes to Brazil’s most precious treasure.