When Humming a Dopey Song
Throws You Into a Mad Loop

A song stuck in the head is akin to Tickle Torture: a lethal pleasure with a level of agony measured in riffs and laughter. Both are hard to take seriously until the feather strikes, or the loop starts. I don’t know about torture, but I could be easily killed by a lovely song.
It’s called Earworm for a reason, but again, its power is deceiving, compared to, say, a spider literally stuck in the canal. Even more so if the song is, well, lovely. But we all know that’s bull; once that beat gets pounding, it’s either dance to it, or jump off the roof.
No way around

it, the clickable bunch below is mostly preposterous. Maybe not to you, who may’ve heard them on your friend’s wake playlist. But they’ve spoiled the weather, and drove me to that parapet many a day, right to the moment when, suddenly, they were gone.
And yet, they carved, wormed if you would, a deep, warm burrow inside me, that when I’m free from their spell, I may dwell into a brief appreciation of their power. That is, right before I feel what ax murderers must feel whenever someone wishes them a nice day.
Studies and the Internet suggest solutions, strategies, and some comfort for the affliction. King among them is to start humming another tune, but that not always works: since lyrics often falter me, the words-and-music combo of loopy songs always reign supreme.
Here they are, with as much unvarnished commentary as a bad parent can offer of his children. Some notable performances, or impressive chart climbing, explain nothing of their appeal, or nauseating side effects. No order, only hope it’s the last I hear of them but doubt it.
PINK LEMONADE – Peppermint Rainbow
It’s embarrassing to think that I was once captivated by this extinct New England group of white kids, but it may had to do with the string quartet. Or The Beatles. It was 1968, after all. Even worse is to admit of searching for years, trying to locate this tune. Once I did, I was doomed. But pink lemonades, I do like them.
LOVE IS ALL – Malcolm Roberts
Song festivals were all the rage in Brazil of the 1960s, and when this unknown Brit won one, all big voice and arms widespread, some must’ve thought about a flash in the pan. Years later, I interviewed the nice chap, who went back to play much smaller venues. But my fav that year was, brace yourself, the ‘great’ Romuald, of Andorra.

QUASE FUI LHE PROCURAR – Roberto Carlos
Still in Brazil, RC was considered the king of rock during that time, but this corny song was what he did best. I Almost Went Looking For You shined for a few months, and then crashed down fast. But not before hooking me up for life. I still hum it on my mind, and once I start it, something inside stops working. The chorus, oh, that chorus.
OBLADI OBLADA – Beatles
This song may have split up the band for good, and I always hated it with a vengeance. But while I can listen to all their other ones, without tiring and never having enough, this one has probably played on my mind more than any other. Which crushes my soul. Every time. And you know what? it’s not a bad reggae. Actually, it is.

OH ME OH MY – B.J.Thomas
Hard to believe that Elvis felt threatened by this guy, but he did score a number of hits in the king’s backyard. For some reason, this one stuck with me, and I can’t even listen to the end of it. Actually, I don’t need it: just writing about it gets me going, all the way to the ‘my crazy babe’ part. To use a tired bromide, Sad.
IF – Bread
Two words that should’ve given it away, but millions fell for the cliche-ridden verses and saw-sounding guitar. Not that David Gates lacked talent, or a voice to melt housewives and secretaries alike. But after Telly Savalas talk-sang it to death, only Sinatra to finally (more)
_______
Read Also:
* The Standards
* Newspaper Taxis

bring it down to its earthly bearings. Too late for me, though.
SING A SONG – Carpenters
I hate to knock Sesame Street but when that virgin-sounding vixen, with a disturbing little secret, got a hold of this song and made it into a hit, I was this close to slaughter a relative. Karen‘s voice was even more perfect than Gates‘, and did use to move people to tears. But the phony ‘happy serenity’ she conveys always gets to me.
FOOL TO CRY – Rolling Stones
(You didn’t think that, after my Liverpool hit job, money-hungry Glimmer Twins weren’t next, did you?) This sticky, slacker, slimy of a song tops many lists of ‘worsts,’ theirs and of others. And yes, once I remember it, I’m helpless. Quick, get We Love You to replace it. And don’t even get me started with that album cover. 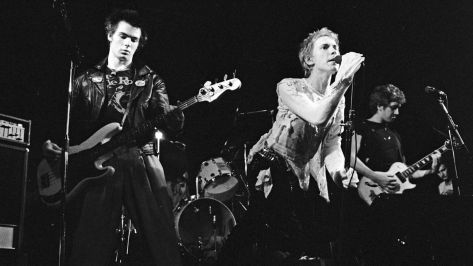 MY WAY – Sex Pistols
This is the song that explained those choirboys to me. And buried both Elvis and Sinatra in the process. What was overbearing and insufferable in their operatic and farcical-tragic rendition, was sardonic and freshly angry on theirs. Fake and custom made as they were, the did tear off the lamé and sequins that asphyxiated 1970s pop music.
ASKING STUPID QUESTIONS
One could listen straight through this list and come up with a cure for Earworm. Then again, who’d be mad enough to do it? And as for being ticklish, most of us are but we don’t know of any dungeon dweller who finds that erotic, as Wikipedia claims.
To complain about a song stuck in one’s head is like blaming the waiter for a bad dinner date, or the latte for getting late to work. Don’t mention that to starving kids. But if you really think that you’ve got an earful, there’s a quick way to drive it all away from your mind: replace it with a spider.