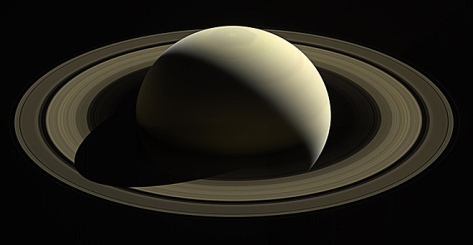 that’s been orbiting Saturn for the past 13 years, is executing its final dive today. It’ll be a grand finale, fireworks and all, as it’ll crash while taking the last of thousands of pictures and videos it already took from the ringed giant.
It was a risky triumph for NASA, for the $3.4 billion, plutonium-powered probe swung up close by us, in 1999, to use Earth’s gravity to shoot up towards Saturn. A mishap could’ve been disastrous, but it was worth: we’ve learned so much with the little probe that will die today.
These expensive and far-reaching missions always prompt questions as to their validity. It’s no different with Cassini. Many doubted its science, and to some politicians its cost-to-dividend ratio could never be compared to, say, another monstrous taxpayer-funded sports arena.
Since it’s hard to quantify the exact impact Cassini‘s will have on our knowledge – apart from, well, so much more than we knew before -, projects like these may be on their way out. While it traveled to Saturn, nanotechnology, for instance, experienced a quantum leap.
Advances in computer science and robotics, as well as the entry of private enthusiasts in the field of space exploration, may assign a different role to organizations such as NASA, and the European and Italian space agencies, that collaborated to make the Cassini project an astounding success.

A TRANSCENDENTAL STEP IN SPACE
For, however be that as it may, the orbiter, and its hitch-hiker, the Huygens lander, dropped on Titan in 2005, represent a staggering milestone. Its secrets will still challenge us long after everyone alive now is gone. That, by the way, is the only form of immortality that makes sense.
It’s the part when space as a metaphor to the human adventure on this planet resounds the most transcendental. That’s how Italian Giovanni Domenico Cassini, and Dutch Christiaan Huygens, both mathematicians, remain alive and even more relevant today than during their XII century existences.
The Cassini journey has also an added benefit: allowing mankind to witness a complete cycle, which started (more)
_______
Read Also:
* Gatekeeper of Outerspace
* War Lord
* Infinity & Beyond

in the early 1980s, unlike the Voyagers, whose stunning pictures of Saturn probably inspired and spiked interest on the scientists behind the current project.

THE ARCH OF A HUMAN DREAM
Those twin satellites are still traveling, now beyond the Solar System, and may even outlast our civilization. There’ll be no way to watch such cycle be completed, as with Cassini. From dream to glorious self-destruction, it’s granting us a palpable taste of immortality.
Thus, our rare chance of being part of the closing act of a grand arch of discovery, an amazing tour into the human genius. And it’ll all take part at a distance that none of us will ever get in our lifetime. Or maybe, we will, long after we’re gone, through other humans.
So here’s to this bus-size of sheer thirst for knowledge that’s about to self-immolate within the confines of an alien world. It’s just fitting that Cassini’s beautiful journey will end at the most staggeringly beautiful of all planets, the Lord of the Rings itself, Saturn.
If you can, do yourself, and your kids, a big favor: watch it live.