t seems like it was just yesterday. 2012, as a matter of fact, when all our concerns were about a bullying culture taking over the Internet. Hardly we knew that four years later, we’d elect a major offender to the White House too. Or should we have expected that to happen?
Not to engage 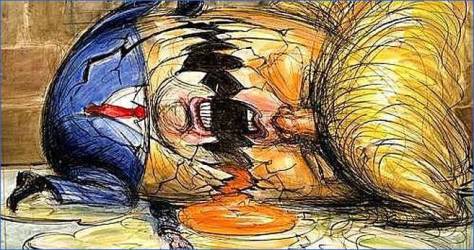 in self-flagellation any more that’s already due, at least to some of us, here’s an old post to evoke a bygone era when it was still possible to believe we were going to get better, and trolls and conspiracy nuts would hit their expiration date soon enough.
For it’s actually a hopeful article, and brief too, let us add, lest not let any dragging feelings of defeat cloud our already sore horizon. But we did get to a dangerous point when it seems impossible to get any worse and, at the same time, perfectly natural if it really does.
For on the first anniversary of Trumpism, things look so bleak that many of us will do the only thing that still brings relief to the overall doom proceedings: we’ll be screaming out loud tonight, at the nearest public place and along a crowd of dissatisfied customers like us. We do hope someday you won’t need to join us but for now, all are invited. 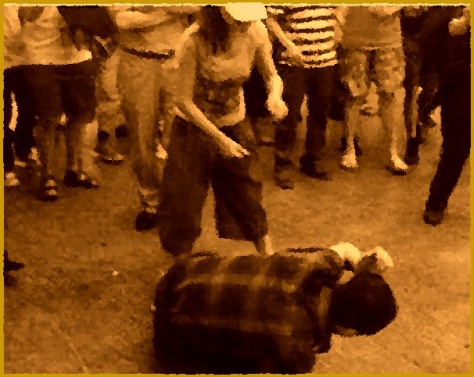 When the Rude, the Offensive & the
Inconsiderate Get to Pay Their Dues

Now for something completely different. For many a poor old devil, there’s been a thousand times plus one, when happiness has stood farther apart than ever, just because some idiot was blocking the way. More often than not, help was not forthcoming, and the troll won.
That’s not what’s these stories are about. Have you been annoyed lately by talkers at the movies? people who curse right in front of your little niece? neighbors worshiping loudly on the front yard? Good news: people in England, Belgium and the U.S. have just had about enough.
Even if these effective techniques involve a measure of confrontation, or the ever so slow work of the legislator, none is violent or unreasonable. They’re all solidly based on the democratic tenet that my freedom to act like a douche ends when your own stupid stunt starts.
Obviously, we shouldn’t have to be getting to this to placate our torments. On the same token, no one needs to place anonymous rants in some comment stream to vent their frustration. Or worse, getting so self-righteous about it, as to justify blood and dismemberment.
In most cases, we shouldn’t be bothered. When Brazilian bestseller author Paulo Coelho said that ‘if you dissect ‘Ulysses,’ it gives you a tweet,’ he was expressing his opinion, even if most who read James Joyce’s masterpiece couldn’t disagree more. Ultimately, though, his own admission of ignorance may’ve set in motion the erosion of any credibility towards his own self-aggrandizing work.

In others, you may be annoyed, it may be inconvenient, but it’s not hurting you, and it’s bound not to last more than a brief moment in your long, fruitful life. That’s the case of a New Yorker, so thrilled by his own singing abilities, to the point of having an entire subway (more)
______
Read Also
* When Beast Attack
* Teach Your Children Well

car suffused with contempt for his act. Since the video did go viral, it’s unlikely he’ll get any singing gigs, like, ever.
For most of every other instance, there are the useful examples that follow. They may help you hone your exquisite democratic skills, while helping you also spend at least a few minutes of your day feeling better about the way you conduct yourself. None other has been our intention in slightly over two years of blogging. So enjoy it, and join us to celebrate our 1000th post.

FINES FOR CURSING
Living in society, and its multimillion-dweller cities, no less, is an art of exercising restrain while surrounded by the crowd, regardless of how high your own personal ambition and goals may reach. Apparently, the common courtesy of keeping your thoughts to yourself, either complimentary or the other kind, has also been eroded, and fast.
So in towns such as Brussels, and Middleborough, Massachusetts, the legislator decided to step in and impose fines for those who deliberately make the lives of others miserable. Specifically, the laws aim at racist, homophobic, or sexist comments, expressed loudly in public and directed at someone’s appearance, for example.
Again, in an open, democratic society, there are plenty of places and situations, clubs and enclaves, other than your own home, where that sort of rant is acceptable. But to direct it at others like that does indeed equate to personal aggression and, if education and all else fails, then punishment is what the bullies should get.

NINJAS FOR SILENCE
Many a meaningful movie watching experience has been ruined by the company we keep. In the era of personal devices, and headphones, and DVRs, education plays a big role to explain why some simply can’t leave their phones alone, or need to pontificate the action on the screen, with wisecracks among their friends.
There are, naturally, attenuating circumstances. If you’re going to watch an action movie, or an sci-fi pic directed at teenagers, then you are the one at the wrong theater. Or screening time for that matter. In fact, some cult movies actually require the participation of the audience, as you probably already know, if you’ve been around since at least the 1980s.
But horror movies are tricky, indeed. It’s a given that young minds, still forming, may laugh at the most inappropriate times, in order to release tension, hide their own fears from their peers, and get a crowd reaction too. So you may consider your own motivations on going to watch a film at a time of the day, or particular cineplex, that are bound to ruin it.
At London’s Prince Charles Cinema, when all else fails, though, you can call the Invisible Ninjas. Dressed in all-black Lycra suits, and moving stealthily through the aisles, these volunteers may be just what shy moviegoers have been hoping for ages, but were afraid of being beat up: help against rude audience members.
Don’t worry, no one’s likely to be challenged by some lethal, bare-hand fighting skills displayed by these unpaid ushers, who you may even meet in plainclothes, selling popcorn at the entrance, before the movie starts, without you ever realizing what they’re really there for. But it beats calling the cops to settle some missing segment of dialog.
And about those so-called Morphsuits, well, they’re part of the appeal of the whole enterprise. Volunteers may not be paid, are at risk, at least potentially, of facing an Ultimate Fight practitioner, and may even scare the hell off of little children. But the suits are awfully decorative, and are a marketing selling card. Besides, little children don’t really belong in horror movies, right?