A Message Stuffed in the Butt
& Other Breaking Jesus News

At this point, whether Jesus, a.k.a., the Nazarene, – whom two billion call the son of god – has even existed, is beside the point. A busybody for over two millennia, we dare naming J.C., ‘most likely to succeed’ as Fab Fav of all supreme invisible beings out there. (Please don’t curse).
News about the carpenter ran the gamut, this year. Archeologists, fussy about a tomb – his? – and a town, where apostles lived, came up again short of evidence. Just as skeptical scholars can’t say for sure he’s not real. Plus new Jesuses, and of course, the secret stuck in the butt.

But such biased coverage had at least one merit: it counterbalanced the continuous, and malodorous, flood of stories about some D.C. dude, who believes he’s god too. And naturally, the depressing headlines about the world we actually live in, which some call godless, while others, a rich banker’s dream. A time when gods are bankers?
It went beyond that, with the vicious-religious commentary streams on social media. This time, every year, some get noticed that Dec. 25 is Krishna‘s official day of birth too. Regardless that neither may have actually been born then, zealots flip, and curses and expletives ensue.
In truth, if one could even invoke such alien concept when talking about faith, neither Krishna’s history matches the lore, nor a big chunk of Jesus’ own walk on Earth could be ever fact-checked. Some elements are common to these two, and every other deity, however.
But Alas, their myth has lost ground to pretty much everything, including human pettiness. More people don’t care either way. Isis or, blasphemy, the Prophet, it’s all in the eye and heart of beholders, bless be them. Those who can’t trust the immaterial got to be jealous. 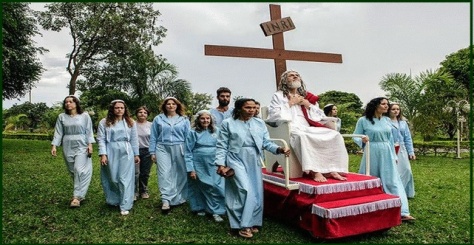 THE MESSIAHS NEXT DOOR
Alvaro Theiss was an atheist until his old friend, a voice he’d been hearing in his mind since childhood, told him the ‘truth,’and we paraphrase it: go, and tell them all you’re Jesus. Maybe for originality’s sake, though, his chosen given name is Iesus Nazarenus Rex Iudaeorum, or INRI for short.
Yes, Jesus of Nazareth, King of the Jews, read that piece of wood that Pontius Pilate ordered a centurion to slap, half-mockingly, on the cross above Jesus’ head. It was supposed to be a joke, you see, just like the crown of thorns, and in the same humorous vein of that other ‘comedian,’ Adolf H.
INRI calls himself an educator, despite his scarce three years of formal education. He sounds pretty reasonable when speaking. (more)
______
Read Also:
* Invisible Beings
* Unanswered Prayers
* The 2000-Year-Old Boy

Hey, one has to make a living, and in Brazil, that’s far from easy. That is, until he sports his white robe and preaches about peace on Earth and all that. Crazy, right?
In fact, it’s hard to dismiss him, Christ of Siberia Vissarion, Japanese Jesus Matayoshi, Zambian Bupete Chibwe ‘Jesus of Kitwe’ Chishimba, or South African Moses Hlongwane, for trying to make a buck, compared to some folks we know in Capitol Hill. And unlike the Orange Scarecrow, people truly love them.
THE APOSTLES’ TOWN & THE TOMB
It goes like this: once there was a town, Bethsaida, founded 10 centuries before you-know-who, which a Roman Emperor later renamed Julias, where Jesus told Peter, then called Simon, and Andrew, according to the Bible, ‘Follow me, and I will make you fishers of men.’ Still with me?
Incidentally, Julia Augusta was Emperor Tiberius’ mother, which may suggest that Jewish monarch King Philip Herod, son of Herod the Great, who rechristened the place, was trying to, well never mind, we diverse. Well, archeologists may have found Julias. Maybe.
Impressive but not as thunder-stealing as Jesus’ tomb, claimed by another team of diggers. Or not. Science has performed miracles reconstituting our ancient past, but the process is mostly random. To pinpoint a place where the man’s said to have spent only three days dead would take another sort of miracle.
The site has been laying under Jerusalem’s Church of the Holy Sepulcher, a place plagued (ops) by strife, fires, and earthquakes. Razed in 1009 and then rebuilt, it was identified as Jesus’ grave by a delegation sent by Rome 17 centuries ago. Their claim is so far the sole evidence modern scholars have to contend skeptics’ doubts.

BUTT OF A 2-CENTURY SECRET
Which brings us to the year’s most surprising news about the Lamb: hidden inside the Cristo del Miserere, a statue of Jesus at Spain’s Cathedral of Burgo de Osma, there was a letter written in 1777 by chaplain Joaquín Mínguez. Its content reads like a fascinating time capsule of life in the period.
It describes the statue and other works by Bal, games popular among Spaniards of the time, such as cards and ball, and mentions typhoid and malaria. Its strategic location, under the cloth covering the Cristo’s butt, was naturally what makes this the best Jesus-related story of 2017.
It has more potential to spice dinner conversations than a depiction of Spain, circa 240 years ago, so concerned about wheat, rye, barley and oats. And it certainly beats that empty tomb, or the buried town, or those messianic preachers. Isn’t it what the spirit of Christmas should be about?
A bit funny, a little devious, a lot of history. Sprinkles of guesswork, dashes of irony, and plenty of humor to boot up the challenging times. Seize the moment, be a tad stargazed. A sip of spiked eggnog and we’re good to go. Just don’t fall asleep on the hay of that Nativity Scene. It may be Christmas but they’ll call the cops on you.