Silica, New York Hacks
& How to Sell Your Soul

Here’s for holding more than one thought at the time. It’s easy to overlook the many worlds one goes through, and ignores, in the course of a day. Or curses we allow ourselves to be trapped. But fear not: others have been there and escaped. All it takes is an unbiased focus.
It’s hard to incorporate certain words into conversation, such as silica, let alone to add tips on how to make the best out of it. Or hacks to suggest out-of-towners. And while at it, souls be damned, but why not get the most out of a good, old-fashioned blood pact with the devil?
It’s all in a New York minute, as

they used to say when a movie followed news at 11. One would need change to make a phonecall, and a camera to take a picture. In those deceivingly quaint times, time itself seemed to last longer. But if you could get a glimpse of the past as it really happened, you’d catch everybody running.
The years when one has no concept of how things even worked before their era end when they first get fired from a job. Or step onto the spilled contents of someone else’s stomach. When you realize it can happen to you too, but at least, you’re not the only one. Granted, it’s as twisted a consolation as sex before breaking up.
Or when one stops thinking about sex. For life really starts once you get it where it comes from. But it’s all so brief; linger much, and you’re already on the other side, that river has passed you by. But while fools dwell on counting waves, the quick sells a self-help kit. Hence, the quirks, hints, and multiple vices of living in the big city.

MULTI-USES FOR A LITTLE PACKAGE
Sometimes one can’t avoid using one of those detestable buzzwords like iconic, or hacking. But if there’s anything that gets very close to both is those little silica bags that come inside a new shoebox or latest gadget. You’d think they’re poisonous but you’d be dead wrong.
What they are is stuff that clogs our landfills. Good thing then that you can use them for drying you phone, after fishing it out of the toilet bowl. Or stick them into your smelly luggage (please, don’t use the same ones). They’re handy for dissipating fog too, but you’re not crazy of visiting us during winter, are you?
Silica is also good at preserving old photos. Chances are, though, your favorites are already on the cloud, and the old ones got trashed by your ex. In any case, be creative and use those bags (more)
_______
Read Also:
* Is It Raining Yet?
* Downtime
* Curb Your God

to dry out anything. Just never, ever use them as a condiment; they won’t kill you but will certainly ruin your meal. Bon appetite.

WHERE THE NEON LIGHTS ARE BRIGHT
This town is where the world comes to get charged. Which means, people from all over are all over all the time. Most moved in here so not to get insulted or seen with suspicion. Everybody’s welcome, unless you’re the offender, or a brute, with no sense of common courtesy. If that’s the case, don’t bother coming.
For everyone else, here’s the deal: like Broadway? get same-day tickets at TKTS, in Times Square. Free museums or Wi-Fi? Download the apps, or get down to a subway station; New Yorkers hate it but they do have reception. Once there, get a MetroCard. Bathroom? They’re rare, sorry, but there’s also an app for it.
And keep in mind: ask directions, no personal details. Don’t block sidewalks or stop suddenly on the street. Keep the right on escalators and let others out before getting in. Never steal newspapers, cab rides or places in line. Neither talk at the movies, nor shout in comedy clubs. Be polite and tip your server. Always. Have a nice day.

TIME TO TEXT DOCTOR FAUSTUS
If instead of nice, you’re actually having a troubling time, you may consider help. Some are driven to tears, others to conjure a higher force. The devil himself, for one. Non believer? no matter; word is that there’s no restrictions as long as you’re willing to pay the right price.

Assuming you won’t be here for long, and that doesn’t mean in the city, let’s be sure you’d negotiate the terms of just such an agreement from a position of power. So says Dr. Rex Touth, who wrote a book on how to put your soul on the market. It’s been done, you’d better believe it.
For the good doctor has some clever advice for dealing with the Prince of Darkness. What to ask, and how, and when to count your losses and move to where the sun doesn’t shine. With no skin on this game, we just like to watch clergy and cloth get all worked out about it. At that, no one beats us, not even you-know-who. 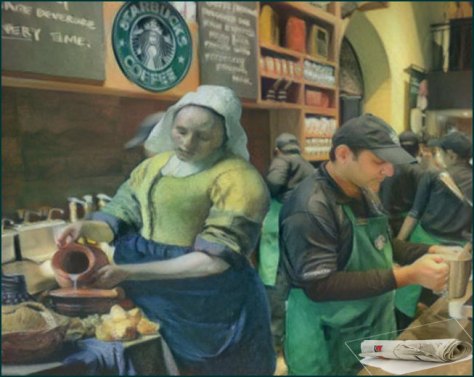 THE WORLD IS NOT A MASTERPIECE
We drag ourselves along, fully aware of how people around the world are envious of us. And that many wish us dead. Forever. Never mind them. We like tourists, we’re glad to show them seven ways to get anywhere in the five boroughs, just to draw out their envy and awe.
At the end of the day, they don’t need to know how small a place we live in; how meager our income; how we’re on the crosshairs but of the city’s real estate masters. Our days are counted, as we can’t compete with the Chinese elite’s kin, or some dictator’s despicable relatives.
Let them dream that we live in some flashy penthouse, and go to glamorous parties, and stand shoulder to shoulder with celebrities that, just between us, we make a point to pretend to ignore, just before running to social media to tell the world all about it. As we mentioned, we won’t be here long. Guess how much they asked for my soul?

2 thoughts on “The Space in Between”