Pictures of Earth at Night From
Space: Stunning Beauty & Concern

Watching Earth from 199 miles up has changed how we see ourselves, our cities and the planet, thanks in part to photos taken from satellite and by the astronauts at the International Space Station. As they’re staying ever longer up there, aerial photography has greatly improved.
All that these recent photos have in common is that they’re all night pictures, but boy, aren’t they striking. They’re also surprisingly revealing and instructive about what’s going on down here. Hopefully, they’ll become valuable tools for raising awareness and change.
Credit should be given to NASA which, despite its current shoestring budget, still manages to wow us with some of their ongoing projects. One such program is the Earth Observatory, which is a comprehensive six-month study, using high-resolution night images of Earth, to ‘gain insight on human activity and poorly understood natural events.’
The now little government agency that still can often works in conjunction with other scientific research teams, such the National Geophysical Data Center, NOAA, as well as the European Space Agency. The ISS is also an integral part of such programs, as it orbits through different patches from satellites.
Whereas the Earth Observatory is a set study, the astronauts are free to photograph Earth following their own instincts. And photograph away they do, to stunning and quite meaningful results. Whether they direct (more)
_______
Read Also:
* Up, Up & Away

their cameras to hurricanes or important events on the ground, one has a sense they’re like night protectors, watching over us.

THE PRE-INAUGURATION LIGHTS
That’s exactly what they did last Saturday night, by turning their lenses over to the preparations in Washington, D.C., of President Barack Obama‘s second-inauguration parade path. And it took a Canadian, astronaut Chris Hadfield, to capture the view from above when the estimated million people were not yet there, but the lights were already on to welcome them.
It’s probably the first picture of its kind of an event with such civic significance. The president, who in matters of policies related to the U.S. exploration of space has been an underperformer, may have nonetheless had a moment of reflection, knowing that high up above someone took the time to mark one of the most important days of his life. With a space pic, no less.

NEURONS & THE CITY AT NIGHT
Watching these amazing pictures NASA takes through its satellites gave Infinity Imagined a great idea: to combine them with pictures taken in a place billions of times smaller than space, the inside of the human brain. And guess what? they look eerily, astonishingly alike. Who could’ve thought?
Placed side by side, one could hardly tell that one is a night picture of a big city, and the other of neurons activity, photographed through the microscopes of the NY State Dept. of Health’s Wadsworth Center. Almost interchangeable in their beauty, one could still say that they both share an important commonality: the human brain. 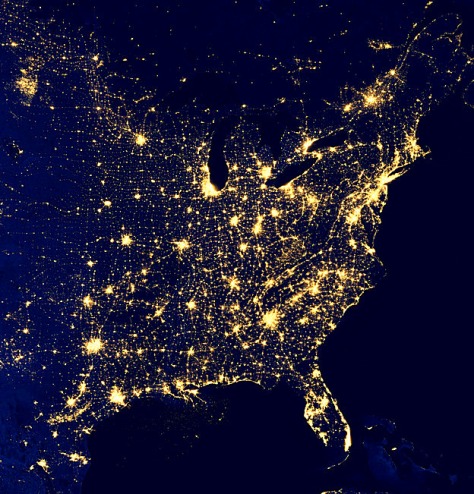 A TROUBLING PATCH OF FLARES
Where NASA pictures may prove the most useful, though, is when they catch the threat of man-made environmental damage, and taken as a whole, there’s no scarcity of examples of that all over the planet. But a particular patch of lights that wasn’t visible in previous night surveys of the U.S. has become cause for disturbing fears.
In the latest one, among the usual contrast between the light of the cities and the dark of rural areas, the satellite cameras captured a bright spot in North Dakota that intrigued scientists, at first, and now is keeping environmentalists up all night, concerned about its implications.
As it turns out, there’s a current boom of oil exploration in the region, using the highly risky process of fracking, and what can be seen from space are the giant flares of natural gas, burning from hundreds of well rigs. As the hundred fifty companies operating in the area have no plans for the gas, they’re allowed to burn at least 29 percent of it for a full year.
The gas comes up with the oil as a result of the fracking, the injection of tons of water and chemicals into rock formations over 2,000 feet below the surface. Thus, besides using a terribly dangerous and pollutant process to extract oil, companies are also wasting potential energy that could be at least be used to power surrounding communities.
They’ve been drilling 24/7 to the rate of eight new wells, or some 700 thousand barrels, a day. It’s absolutely appalling that this is all happening without a minimal regulatory framework. At this rate, beside irreversible contamination of groundwater and risk of once very rare earthquakes, like the one last October, we may be bracing for a catastrophic public health crisis.