A tweet of artist Daniel Picard with a photo that supposedly shows Batman as the author of the graffiti that accused the reporter Clark Kent of being Superman, unwittingly made Perry White, the Daily Planet’s Chief Editor, the main news of his own newspaper this week. The shy but well regarded Kent is a longtime staff writer at the Planet.
The graffiti showed up on several Metropolis buildings two days ago, and began trending on social media. Both Kent and Superman were advised not to speak publicly about the matter, according to sources. But scrutiny by the city’s press corps and late-night chatter on talk shows threatened Perry’s own position at the Planet.
In an official note, he called 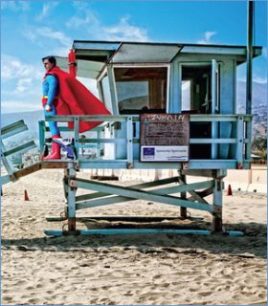 the rumor ‘fake news.’ However, the stunning picture of Batman in the very act of scrawling the message put pressure on the Planet‘s editorial board. Hundreds of commentaries and posts on Twitter, Facebook and other social media, are questioning the authenticity of the photo, and Picard is yet to explain its provenance. Some posters are accusing Perry of having hired the artist to ‘stage’ the picture and embarrass Batman.
Gotham Gazette, main paper of Batman’s city, also got dragged into the controversy, but hasn’t yet published anything about the matter on its pages. According to Perry, the rumor is ‘irresponsible,’ and represents a ‘threat to the security of citizens of Metropolis.’ The Planet ‘makes itself available’ to Commissioner James Gordon, the city’s chief of police, to help in the investigations, the note concludes.
The Twitter picture, which is being examined for possible manipulation by police forensics experts, shows a high level of technical precision, usually not accessible to anyone outside official minting agencies and law enforcement. A parallel investigation is also being launched to find out the identity of its author, since Picard doesn’t sign it on his tweet.
Rivalry between Superman and Batman already sowed tensions among officials of both Metropolis and Gotham City, and in at least one occasion, caused a major conflict of residents of the two cities. In 1978, during an Independence Day parade, citizens got into a massive public brawl, that resulted in two casualties and dozens of injuries. Since then, the superheroes have avoided appearing together in public.
Periodically, rumors surface about the civilian identity of the two most popular American heroes, and the names of Kent, for the Man of Steel  – a native of the planet Krypton –  and Bruce Wayne, a wealthy Gotham philanthropist, for the Cape Crusader, are often mentioned. Even as no one has proven it, there’s consensus that law enforcement and official authorities are aware of their secret identities.
News about this issue will be published as soon as it becomes available.