But Why Didn’t They
Call it The Big Pizza?

The world would laugh, if it’d even care, about the little idiosyncrasies New Yorkers seem to invest themselves with so much passion one would think that the fate of humankind is squarely pinned on them. Case in point: pizza, local fast food extraordinaire.
Now, we know, would it kill us to exercise restrain and abstain from such prosaic subject? We’re not above it, though; yesterday, when we were cold and short of cash, it seemed like a good idea. But fear not, for we approach the beast with utmost respect.
For even for pizza there’s a certain way of eating it, if far from solemn, that denizens of this great cesspool are proud of mastering early on. And then there’re all the wrong ways to be ashamed doing it. Just ask the Mayor, who was caught eating the holy dough with fork and knife.
Anathema, nothing less. After all, the whole combo of flour, cheese and tomato sauce may have been invented in the old country ages ago, but the slice and the ‘fold and eat with your hands’ maneuver have been both trade-marked right here, on the streets of the five boroughs, just like steaming manholes and yellow cabs. 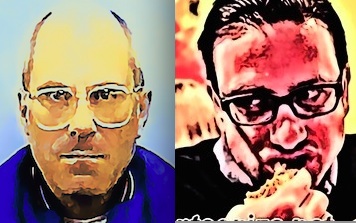 What? You have a problem with that? No one should be surprised if many an argument has flared up or settled down over a steaming pie, and for that dwindling minority with a pocketful of change, nothing is as affordable and substantial than a 4am slice by the curbside.
But alas, not even pizza is that New Yorker, and as with many other city-by-the-river staples, it’s been appropriated by the world, many times over, gritty, warts et al. Perhaps one day we’ll all be talking about pizza like we do today about the old Times Square. But we digress.
We’re living in other times, that’s for sure, even if equally lean. Definitely diminished slant on little localized treats, though, as they plan on printing a pie in space and making a slice last longer than a heat wave. Never mind us old farts, for kids are unlike to mourn the demise of such a 20th century food relic.
Big Apple? Who were they kidding? So, fine, it was supposed to evoke the original sin and all that, besides looking a bit more photogenic in tourism ads. But the likelihood of seeing someone eating apples on the streets of New York was never bigger than spotting a kangaroo at a subway stop, or a beret-wearing mime.
Although we’re sure those have also been spotted somewhere around here. In any case, we thought about getting a quick survey on wonders of this thousand-year snack, that can proudly be a meal on its own right. Just don’t bring pineapples anywhere near one or we’ll scream.

MORE ITALIAN THAN ITALY
Inevitably, as with many scrumptious foods we’ve been indulging for centuries, the old loaf of bread covered in cheese and herbs (predating even the ascension of tomatoes, around 700 A.C.E.) came from the ancient country. Many trace its earliest reference to Virgil’s Aeneid, written almost 800 years before that.
To some, it was a baker in Pompeii, Publius Paquius Proculus, who invented it some 2,000 years ago, and in fact, a relic of the Vesuvius eruption that destroyed his city and Herculaneum is a fossilized round dough that strongly resembles some of the culinary achievements of ‘The Original Ray,’ in New York.
For the typical Napolitan, for instance, there’s nothing else but Marinara and, Ok, once in a while, Margherita, and we’ll spare you from the origins of these two common pizzas. We said hold the pineapples before but New Yorkers are known not to be above some sausage, (more)
_______
Read Also:
* Wait a Minute

meatballs, broccoli, even, grasp, chicken. They say that way back when Virgil’s hero, Aeneas was still kicking, pizza was good enough for breakfast. Back to our own times, it may be the only edibles consumed by many a Brooklynite. Or Dan from Maryland. Some even get hurt by it. And then there’s the vegetarian slash vegan slash gluten-free crowd, who wouldn’t touch the stuff. Again, we digest, er, digress.
But if Italy is the birth of pizza, New York is its adoring adoptive parent and, given how it became ingrained in the fabric of the city, it’s doubtful that anywhere but here, people would go to such length (say, a few blocks) to have a slice on their way home. Have a problem with that?

IN THE TRENCHES & IN SPACE
Now, just because it’s been invented when Rome had just been weaned by that she-wolf, doesn’t mean that pizza won’t last longer than most of us. Years in fact, if it’s up to U.S. Army Natick Soldier food scientist Michelle Richardson, who’s been leading a team working on ways to build a better dough.
The idea is to supply combatants with a three-year old slice that would taste as fresh as the one you get on Bleecker  Street, off MacDougall. Or almost. It’ll take a lot of tweaking to prevent it from getting moldy and preserve its moist texture and flavor. For that, best of luck, Dr. Richardson.
NASA, on the other hand, is not waiting for the pizza to get cold either. After offering a $125K grant to anyone making a better slice, it’s just demonstrated a 3D prototype printer that can actually print a better Domino right up at the space above us. Astronauts at the International Space Station are salivating in anticipation.
It may take a while to, er, fine-print the resulting dough and cheese and tomato combo, and again, moisture is a bitch to tame 300 miles above the Earth. But they’ll get there. After all, if there’s a group of people who graciously dodges daily indignities just to be at the cutting edge of science is the rocket scientists themselves: astronauts. 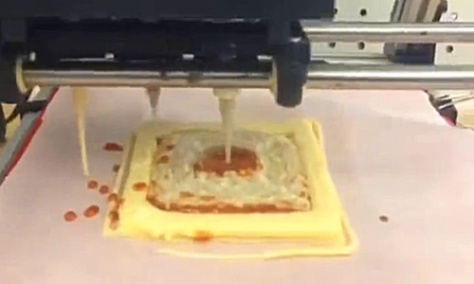 DELIVERIES & EXPLODING PIZZAS
Talking about indignities, we’d be remiss without mentioning the bravery, heroism, and promptness displayed day and night by the anonymous legion of pizza delivery people, anywhere but in particular, in New York. In fact, they were probably at the forefront of the very concept of delivering food decades ago, and we couldn’t be more grateful to them.
The dark side of such sunny appraisal is, of course, the steady number of pizza delivery people shot on the line of duty. Brian Douglas Wells, arguably the most notorious among them, wasn’t even actually delivering pizza, but you may say, supplementing his meager income, when he got killed in 2003. Police say he was part of an elaborated but poorly executed bank robbery slash stunt that went terribly awry.
For some reason, his companions, all now convicted for the botched attempt, convinced old sport Wells to hang a fake bomb around his neck, who knows, perhaps to add drama to a plan that they may have thought lacked it, that is, if you don’t consider the guns, the live rounds ready to be blasted and the potential for heavy casualties. They weren’t waiting for the movie either.
All and all, it was a bizarrely complex plan to follow too, way above poor Doug’s head. On top of this, his old pals neglected to tell him that the bomb was real. Actually, even the police didn’t believe it until it was too late. A stray shot was all that it took on that hot August afternoon in Eire, Pennsylvania, for old Doug to be blown up.
A much easier payout awaited Lounes Issaad of Gaithersburg, Md, who’s just hit the million dollar jackpot. After seven years delivering pizza, he’s definitely earned it. Even if taxes and long-lost friends and family will inevitably show up to get their cut, you’ve got to admit it (and we can’t help it), it’s still a lot of dough.