Kubrick, Who’d Have Been 90 & the
Odyssey to a Future That Never Was

A New Yorker who spent most of his life in the U.K., Stanley Kubrick had been an accomplished photojournalist before his movie career as a director took off. His 1946 series for Look magazine, Life and Love on the New York City Subway, displays the same keen eye and compositional style that would mark his filmography later on.
In just a few years, the man who would say at one point that ‘the most terrifying fact about the universe is not that it is hostile, but that it is indifferent.’ went on to become anything but, with a string of now classics, such as Path of Glory, Spartacus, Lolita, Dr. Strangelove, 2001, A Space Odyssey, and A Clockwork Orange, to name a few.

Today, when he would’ve become 90, Stanley Kubrick is intrinsically connected with the future that he realized with his movies, more than anything he’s ever envisioned. And that’s no small feat for such an overachiever. Even as he just missed the dawn of the iconographic year that named his sci-fi masterpiece, much of what he and Arthur C. Clarke anticipated is finally rising on the horizon of our times.
Not that we should feel too nostalgic about the future that could’ve been, with its interstellar travel, and dreams of finally understanding our evolutionary connection with the ‘indifferent’ universe surrounding us. We’re actually lucky that another one of his disturbing dystopias of what may lay ahead, A Clockwork Orange, based on an Anthony Burgess book, hasn’t quite materialized. Yet.
Before going back to those pictures of a post-war Manhattan, and to a few interesting audio and visual tchotchkes about Kubrick we’ve found on the Internet, let’s do him some justice. For even at the heart of his enormously challenging techno-futuristic visual parables, there was his deeply humanistic option for a different construct of our own fate.
From his anti-war trilogy of sorts, Paths of Glory, Dr. Strangelove, and Full Metal Jacket, to his portraits of individuals at odds with an all too powerful system, either stoically like Spartacus, or as a crook, like Barry Lyndon, or even one succumbing to his own creeping madness, as in Stephen King’s The Shinning, Kubrick remained faithful to his non-religious but highly moral Jewish working class roots.

RIDING THE UNDERGROUND
The Museum of the City of New York has some 40 thousand negatives that the young photographer took of Manhattan in the 1940s. Some of his pictures are so cleared eye they could’ve been taken now. Subway riders fast asleep, hanging from the overhead bars, or with their faces buried in newspapers. Yes, you could make that iPhones, but the underlying content would be the same.
Calling him Stan Kubrick, the Camera Quiz Kid, Mildred Stagg wrote in 1948 about ‘the boy who said that had turned nineteen a week ago, and has been a staff photographer for Look magazines since age seventeen.’ And registered the kid’s own impressions about (more)
___________
Read Also
* The Shinning
* Polly & Meow
* Checking In
* Strange Love

what he was trying to accomplish even then, in what could be seen as a foresight of he’d do for a living later. 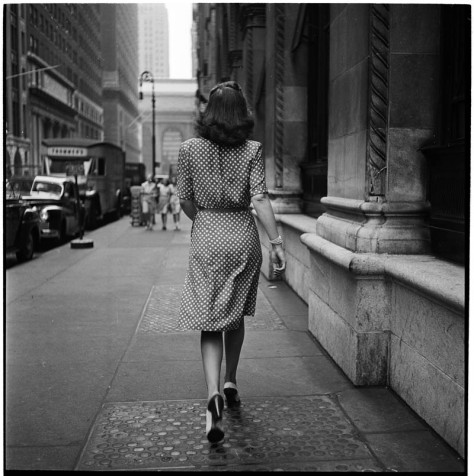 ‘I think esthetically recording spontaneous action, rather than carefully posing a picture, is the most valid and expressive use of photography.’ That wouldn’t be an out-of-place statement about some his camera work in Spartacus, for example, still one of the best examples in film of a overarching story, told by many characters and large crowds, and still framed as if it originates from an intimate point of view.
At the same time, Kubrick mastered an immediately recognizable style, carefully angling visual components of a scene as if in a Great Masters painting. He did that in Barry Lyndon, for example, and revisited it in the less successful Eyes Wide Shut, his last movie, completed shortly before he died in his sleep, of a heart attack, in 1999.
PERFECTIONIST AS A CAT
Stanley Kubrick was notoriously averse at explaining his work, which is understandable to such a visual stylist whose films often dispensed with words to focus the narrative on imagery. But he expressed much of his M.O. while making movies in two revealing interviews, one with French critic and biographer Michel Ciment, and the other with physicist and writer Jeremy Bernstein.
Again, we’re lucky to have much of such views, in his own words, available online. But it’s interesting to note that, while he reached the peak of his creative powers during the convoluted 1960s, he remained hardly affected by the themes of

rebellion, and alternative lifestyles dear to the period. Except, of course, for sex.
Since Vladimir Nabokov‘s Lolita, which he adapted and wrote the uncredited screenplay before directing it for the screen, through Clockwork, up to Eyes Wide Shut, Kubrick remained interested in exploring themes connect to the pursuit of sensual pleasure, and conflicting emotions bottled up by relationships and marriage.
No Linda Lovelace here, but unlike that period piece, his deceivingly quaint conceptions about sex are still resonant. Without being either a misogynist or a flag-waving libertine, he correctly expressed the puzzlement those of his pre-war generation were faced with, once baby boomers took over the cultural dialogue of the time. 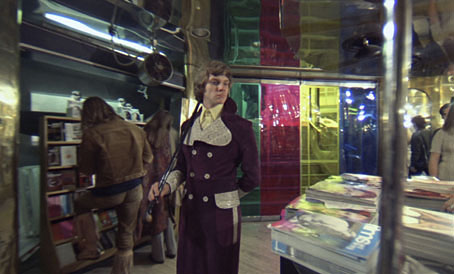 ATUNED WITH THE TIMES
Even though his was not a cinema of ‘message,’ one concerned about what was then immediate, as the sexual revolution and the movements against the Vietnam War, Kubrick was nevertheless very aware of his times. In fact, a movie such as Clockwork wound up helping define that same era, while projecting its excesses a few years ahead.
A frame-by-frame scrutiny of Alex sashaying into the Chelsea Drugstore, an icon of the Swinging London of the 1960s, reveals a sample of some of the period’s cultural artifacts, such as vinyl albums of the Beatles, Pink Floyd, and the soundtrack of his own 2001, along with porn magazines, and even what appears to be a cameo of the director himself, with his back to the camera.
By then, Kubrick himself was already inserted in the era’s culture, and guaranteed his name on the cinema history books. Unlike back in 1951, when he wrote and directed Day of the Fight, a documentary on Irish middleweight boxer Walter Cartier’s fight against Bobby James. 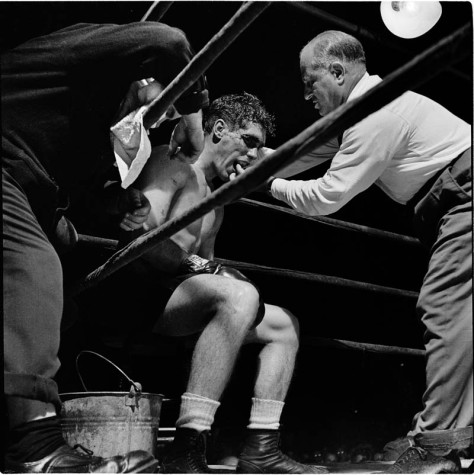 Kubrick adapted the story line from a photo-essay he’d done for Look two years before, and the doc’s grainy, B&W cinematography almost evoke the Italian neo-realism of the post-war, and effectively anticipates some of the iconographic themes and camera work that would mark the cinema vérité that followed.
Despite a bombastic soundtrack and British Pathé news reels’ narrative style, Day of the Fight is unmistakenly American, as it frames the confluence of social grittiness and the upper mobility alluded to by the American dream. Its visual style reflects both the noirish brutal sensibility of Robert Wise’s The Set Up, of 1949, with the literally in-your-face broadcast of the fights of the time.

THE WOUNDED HERO
In his short but memorable list of feature films, Kubrick wouldn’t use again sports as a dramatic device, neither the symbolism of Cartier’s knockout was ever evoked in his fiction. Unlike the Irish brawler, who earned his day by the strength of his own fists, most of Kubrick’s characters do not succeed, and are often beaten by their own demons.
As Jack, who froze to death in Shinning, or Barry Lyndon, the wounded and humiliated anti-hero, or Alex, forced to undergo a ‘reprogramming’ that ultimately costs him his identity, as well as Spartacus, or Strangelove and many others, what they all have in common is an intrinsic impossibility of becoming whole at the end.
That’s the relevance of the work of Stanley Kubrick, and how it connects with past masters of cinema, such as Sergei Eisenstein, Jean Renoir, and Victorio de Sicca, to name a random and highly arguable list. Sadly, there’s no one working with such a palette nowadays, mainly because he was also an extremely well educated professional.
One of the distinctions of his films is that they usually inform the director’s fluency in the classics of Greek tragedy, Shakespearean themes, Freudian psychoanalysis and even his discriminating taste in classical music. It may all sound like a mere dilettante’s metier, but in his highly trained hands, such cultural grasp added depth and resonance to his work. Thus, Happy Birthday, Stanley Kubrick.