Here’s our much anticipated – by no one – annually compiled, peculiarly picked, and praised often, End of the Year List. A favorite three-years-in-a-row (not really), it’s for someone with a particular set of tastes – or a Web search engine – such as yourself.
From family fare or affair, to smart-ass kids, for bored adults, and to friends or foes, there’s not nearly a thing for everyone. But the best present will be the – uninsured – reaction, or face, the gifted may express at the gifter, or the grifter.
Full disclosure: lists are atrocious. Holidays too, though one mellows about them before going mad. But giving gifts is nice, people like it. Receiving? not so much. Don’t dare mentioning landfills are on their way out, not without looking like one.
Even for the obscenely wealthy, it can a be a chore, but to hell with the lot of them. The poor always finds ways to give some, just not in cash; the other lot has all of it. Either way, to gift loved ones can be fun. And a pain in the butt.
Full disclosure too: no one sent these to the mailbox downstairs, and to some of us, shopping is hideous, no matter how much is the discount coupon. None will ever touch our open hands – or carbon footprint. It’s all for a laugh or chuckle, no adds or sponsors.
FOR FAMILY & FAKE COUNTRY
Nothing says family like an old-fashioned, vicious card game. Or insulting stickers, to have a saying in the nasty show that follows. Load your stuffings with Stick to the Man decals, or Cards Against Humanity. Hear your phone suddenly stop ringing.
Or you’d rather go higher, and choose instead some choice tree ornaments. Those marking that day when a giant octopus swallowed whole the Staten Island Ferry, in the New York Harbor, are great conversation topics. Oh, you can’t remember that tragedy? That’s odd.
Fear not: Playboy Trump’s Make America Great Again for White Folks With Guns is the perfect alternative to an intelligent conversation about the Long-Playing’s cover model. Yup, time to replay, Go Tell it On Fox News. And have some smocking. 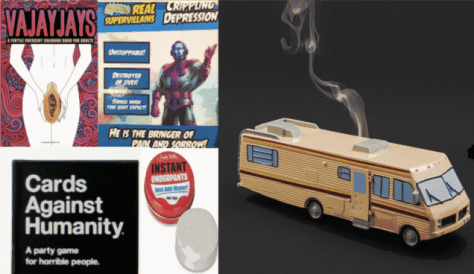 FOR THE SCREEN & ADDERALL CROWD
Children are good (arguably). Bundles of joy, or electroshocks to the privates of single people, and psychopaths. Yours, of course, are adorable, but the miniature kind, you know, wee human parrots, silver spoon in the mouth, can all beat it, pardon the Newyorkism.
We’re all biased, though, to the earnest kind, inquiring little big minds, asking questions but having the sense of shutting up in time. For them, the Book of Religions. It’s like a secular tour through naves and catacombs of the earliest form of mass opioid.
In fact, they’ll learn so much, they’d want to create their own, but discourage them immediately. Threaten to place the chainsaw by the tree side; it should do it. Maybe. Or let them be filthy rich pastors, and bad mouth them on social media. Good parenting.
FOR THE HALF-BED PARENT SET
There’s a progression on this section. Start by the Coloring Books for Spicy Adults, a 50s-ish set of ‘ironic’ drawings, inviting you to spill some color on lifeless silhouettes. Hey, when was the last time you were asked to paint the town red?
For the grey hair confident, get the

conversation going when the gifted unwraps that 55-Gallon Personal Lube. Rehearse some best-practices about consenting adults having mature exchanges, and go for broke: suggest a party when everyone is doused with it. Get lucky.
For the truly Breaking Bad Series-afficionado, few things spell, I’m ready, than the miniature Meth-Preparing, Lab-Van, Incense Holder. Get those masks going and, while the fumes fill the room, stream the episode when they cook it in their underwear.
FOR FRIENDS WITH FRIDGE BENEFITS
The Instant Underwear is the default Plan B for those already acquainted with Depends. Now it’s your chance to show that you care about your old sofa, just as talk veers towards (more)
_______
Read Also:
* Present Time
* The Gifter’s Referral
* Crappy Holidays

myths about proctologists. Or the cultural value of Squatty Potties.
There must be at least one closet-CosPlayer among your close ones. Here’s an action figure to be empathetic with their fixation: the AAAHH!!! Real Supervillain Crippling Depression. The power to quickly put down the enemy. And oneself (our slogan. You’re welcome) .
But for those to whom a Yoga class a day keeps same-age dates away, the awfully butchy Yoga Joes will illustrate how Marines approach Eastern Philosophy: they crush it. Those deemed not fit for naked yoga are in lucky too: they performed fully uniformed. Hurray.
DON’T EVER EMAIL YOUR SECRET SANTA
‘Tis the season when something something edifying got lost before your mother was born, and we’re left with daylight drunken Santa bros, puking outside local watering holes. You won’t be caught dead speaking to any of them, but just seeing them spikes your blood pressure. 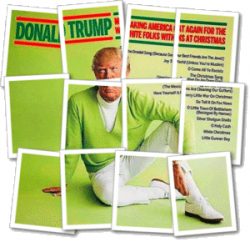 It’s also a time when visiting little ‘villages,’ full of lights and tourists buying tchotkes, with no heavy armed law enforcement in sight, fills you with sheer terror. It happens all the time, but you feel guilty to even think about it. What if it’s tonight?
So if you’re seriously considering following these suggestions, bless your generous soul and send us some pics. By then we’ll be likely at home, sorting what’s going straight to Goodwill the morning after. It’ll be fun to check your pics while waiting in line. Merry merry.