From Theophrastus to Tyrants &
Killers, Bad Guys Never Thank Us

On Liberation Day, some Italians chose to praise Mussolini, rather than 74 years without Fascism. It was on those heady days that Eva Braun married and commit suicide with her mentor, Hitler. Even serial killer Ted Bundy had a wife who bored him a child. So what gives?

In ‘Characters,’ Aristotle’s disciple Tyrtamus reveals the appeal of toxic, narcissistic personalities. Although none is a murderer, they and their modern versions are still despicable to most of us. Yet, some long to marry them. Or make them president.
Many ways may frame this line of questioning. One is to explain it with allusions to our thirsty for power, and blood. Another is down the hall, at the corner office, where it says,’Psychology.’ Skip ‘love,’ ‘Masochism,’ and ‘bad luck,’ and pick an inconvenient one: us.
See, none of those monsters would’ve existed if they were not needed. Nature use predators for dirty jobs. Bullies may arguably serve to sharpen our defenses. Nasty people sit at the edge of what’s morally acceptable, and challenge the pious to break the mold. Some do.
Now, humans are given this precious little gift, free will, supposedly to help everyone find their bearings in the great bal masqué of life. There’s much colliding on that dance floor, plenty of jockeying for a better share of the pie, or bite on the carrion.
To become a prey, though, is rarely a choice, and history is littered with doomed attempts to escape the fangs of fate, ready to chew up the juicy meek with a final blow. One the other hand, if the music stops, there’s no need to be a nimble dancer and exit left. Quickly.

GARDEN VARIETY BADIES & THE NEXT OF KIN
In the underworld of repulsive news, psychopaths and bottom feeders are always on the move. Take ‘Pharma bro’ Martin Shkreli, who’s a convicted felon, but not for his most disgusting deed, getting rich while overcharging a vital drug. To the law, securities fraud is worst.
Apparently, he was at it again this week, running a scheme from behind bars. He is unlikely to have the company of any member of the Sackler family, who made billions by selling a drug linked to thousands of deaths by overdose. Unless, of course, they defraud some rich dudes.
And yet one can be almost sure these people have ‘loved ones,’ (more)
__________
Read Also:
* Out to Get You
* Head & Tails
* Forget Me Not

too, who may or not see them for what they are, even if that is as irrelevant as if they themselves are. Just don’t go around asking how have them all fared in life so far. Thankfully, no one will. 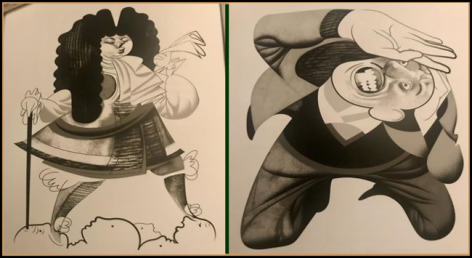 WORLD CLASS CROOKS DON’T NEED TO PLEASE
People have a thing about apologies: they either never say they’re sorry, or simply do it too much. The funny thing is, and this is based on a tiny, completely unscientific survey no academic would touch with a 20ft ruler – the unapologetic is better at catching our ears.
Consider Donald Trump. For a year, he vilified immigrants, minorities, people of color and disabilities. No less than 26 women accused him of sexual harassment, and halfway through it, a crass, incriminating video surfaced, along evidence he’s slept with prostitutes too.
He never apologized, and yet, he got elected to president, mostly by ‘family values’ voters, religious folk, and those left out of nation’s social climbing ladder. Once in office, his only major bill was a billion-plus tax cut for the wealthy and big corporations.
Meanwhile, just count the people who have asked for forgiveness, who profusely expressed how terribly sorry they were for whatever misdeeds they got caught doing, or were accused of. So many you can hardly remember their names. See the point? Yet here we are.

THE REPORTER OF VULGARITY, GREEK STYLE
Facing that, it’s common today to hear, ‘such behavior is unparalleled,’ or ‘it’s the first time that…’ But Theophrastus of Lesbos would beg to differ, if we’d a chance to visit him in the 4th century BCE. Short of that, there’s a new edition out of his 30 Characters.
It’s a fascinating series of portraits of people we could still run into, 1,700 years later. As tame as they may seem now, their traits are what makes most of us despise them and their present day versions. Regardless that many actually fall in love with them.
The Sycophant, who addresses you as ‘my good man;’ the Shameless Man, ‘who, after shortchanging someone, goes back to ask him for a loan;’ and the Social Climber, ‘who, when invited for dinner, is eager to sit next to the host,’ could describe a few people we know.
Even when the title doesn’t quite match what the description sounds like to our modern ways – as with the Tactless Man, ‘who serenades his sweetheart when she’s down with a fever’ – Theophrastus has created some of the finest templates of human bad behavior as they come.

TURNS OUT, TO BE BAD IS NOT ALWAYS GOOD
Editor James Romm writes of this Callaway book, that editorial choices, the lavish illustrations seen here by André Carrillo, the translation by Pamela Mensch, and graphic design by Don Quaintance, were intended to ‘bring out the text’s comic energy and irrepressible vitality.’
Theophrastus, better known as head of the

Lyceum’s Peripatetic school, after Aristotle fled Athens, and for his books on botany, was not nearly as famous, then and now, as his mentor. But of the two, only Tyrtamus, his real name, had an elaborated public funeral.
It’s revealing that ex-F.B.I. director James Comey, fired by Trump in 2017 allegedly to prevent him for pursuing a probe on the president’s dealings with Russia, has the last word on how baddies, bullies, and psychopaths twist even the most virtuous souls who serve them.
On a NY Times Open-Ed column, about how many good people are behaving badly in this administration, Comey writes that, ‘amoral leaders have a way of revealing the character of those around them.’ Sometimes it takes a top cop to tell it as it is.