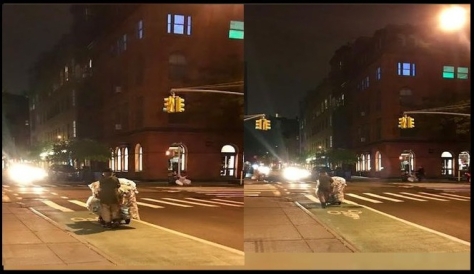 Lives in the Background
Keep The City Lights On

Billions believe and worship a cast of invisible beings. Yet those who can save the day have no prayer of being seen by us. They walk miles collecting empty, 5¢ cans for recycling, while we just walk. Cities can’t live without their hands, and yet cast their humanity aside.
Can collector is a thankless gig, for sure; yet, it’s among the most valuable. Here are three composites, who do it daily, hell or high water, the closer one may get from their stories short of taking their place. Here’s Shi, 68; Simón, 21; and Bobby, 40-ish. (Not their real data).
Recycling has been a survival tool for

many species; to discard, instead, it’s our motto and we flaunt it like a birthright. We’re the toss-away kind until the time will come to get dumped into the pile too. Robots? We’ve already operating under an automated central.
Throwaway gizmos; we’ve created A.I. to skip the reusing stage. But there’s no more room for our rubbish, no matter how delirious is our faith. Some never knew another way but to live for loving others; they’re all in for the greater good. Others, for a bigger temple.
A lifetime of scarcity-turned-into-commodity, free for the taking, poises choices. Living along millions, indulging in what we had no part making it possible, are two. But someone in the background may be busy turning our garbage into something else: the future. 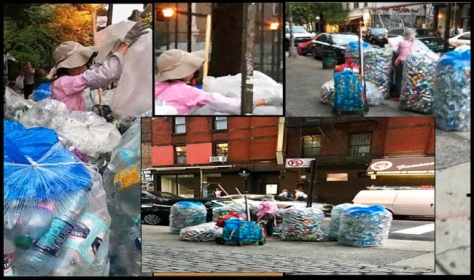 KEEP AN EYE FOR THE UNKNOWN CHAMP
Shi is the member every family should have, a professional tracker of discarded containers. An ancient stand-in for those she’s lost, according to her Chinese name. One may only guess when she’s become our helping hands; her Disco 77 brand sneakers proves nothing.
A CHALLENGER BUILDING OUR FUTURE
Simón is a force of nature to his 13 relatives. They all live in a two-bedroom apartment in Queens, and some get up with him every day at 4:15am. His run now includes some 54 blocks lined up with plastic bags and without him, 215 or so daily cans will wind up at a landfill.

THE CARRIER’S VOICE & FOOTWORK
Bobby is the silent traveler whose blackness gives itself away on a soul-infused voice; his is a killer version of ‘Get On Up.’ That’s all (more)
_________
Read Also:
* Last Call
* Spoiled Leftovers
* Rubbish Wednesday

anyone will hear from him but never on cue. What he salvages though could fund a small shelter full of invisible loners like him.

BEND DOWN, REACH OUT, NEVER KNEEL
There’s pride in roaming the streets doing what’ll benefit the world around, but that’s never the reason anyone does anything. Rather, this sort of confluence, of need plus calling, happens at least once to most of us. It’s there for the taking, and it always costs more.
Conveniently, we step aside and move on. But a few get thrown back into the pile, this time as their last lifeline. That the rest of us feels lucky that it mostly happens to others tells as much as it needs to be known about why we live to cut corners and take it easy.
While suits and ‘influencers,’ tech geniuses and plain snobs avert their eyes, collectors may earn millions of dollars returning aluminum for recycling. No ‘disrupting’ gimmick so far have that kind of shelf life. Make more than that? turn that wealth to be recycled too.