The Dying Art
of Passing Away

There are people who dream about impossible places they’d like to go to when they die. We too imagine someday resting in an improbable place: the Père Lachaise cemetery in Paris. But just so we’re clear about it, we said ‘someday,’ not now, or tomorrow, well, who knows? In any case, once we cross that threshold, we won’t give a damn.
However, even if you do, you may be still out of luck: some places have the inconvenient rule of forbidding people from dying there. Either because your wasteful body may ruin the environment, or climate won’t decompose it, or perhaps because they just don’t like you. So your choice may be as well to remain alive. Or almost, like the walking dead of Toraja. Good luck keeping your friends close, though.
As for us, we’ll never understand this drive to stay alive at all costs. Doesn’t anyone realize how everything became incredibly expensive? Besides, who wants to last longer than our loved ones? In other words, we’re fine with the expiration date that’s part of the deal of living. Oh, and we don’t need to know the day or the way either.
About those places people imagine will be throwing a red carpet, or rather, a fluffy, white-cloud rug, and a welcoming party, we’re not so sure. It’s kind of taxing to start picturing a whole new set of realities to be faced after however long we’ll spend struggling to make sense of what’s around here. Very distracting.
But so you don’t think we’re knocking anyone’s beliefs, let’s suppose that it’d all be exactly as it is in this presumable afterlife? Why would nature go to such an extent to go after each and every one of us with everything it’s got only to let it all to continue as before just under different circumstances, then what? Oh, never mind.

PLEASE DON’T DIE HERE
In Japan, there’s an island, Itsukushima, that’s considered so sacred that they don’t want no stinking likes of you there. That is, they’ll put up if you’re still talking, and especially, walking. But go drop dead somewhere else. In fact, since 1878, no one was born or has died there, and they may kill you for even trying it.
The enforcers are a group of otherwise pious priests, who spend the days in prayer at the island’s holy shrine. But all hell may break loose at even a sight of a pregnant woman, an elderly person, or someone who’s terminally ill, although it’s not clear how would they know it. It all started with the Battle of Miyajima in 1555, after which all bodies were immediately removed from the island and the spilled blood was either cleaned or disposed of. Yeah, that kind of piety has been going on for over 400 years, just so you know.
Not so strict but still a difficult place to die at is Longyearbyen in Norway. No priests are banning the dead there, though, just the weather, still cold enough to preserve bodies indefinitely. People buried a century ago look like they’ve just fallen asleep. Which, let’s face it, it’s kind of creepy. Yes, that’s changing due to the climate emergency but just in case, get the hell away from there, fast. One never knows.
Two other places prohibit people from dying there by decree. Both (more)
__________
Read Also:
* Dead Can Dance
* A Life, Abridged
* Ashes & Dirt

Falciano del Massico, in Italy, and Sarpourenx, France, decided that they’ve simply had enough of the dead and won’t take it anymore. No room left in graveyards, Sarpourenx will actually fine you for dying. Or your relatives if they can be found but the good news is, the town takes credit cards too. How accomodating. Now you go and tell them.

THE WALKING DEAD REALITY SHOW
In Tana Toraja, Indonesia, they believe that anyone who dies can be turned into a zombie, and apparently, they have some of those walking around to prove it. Either that or assumptions about the demise of town citizens are greatly exaggerated. Which is quite unsettling, either way.
In a country deeply suffused by all sorts of spiritual beliefs, it comes from the Tibetan folklore the ritual that supposedly gives rise to the Ro-Lang, the ‘corpse who stands up,’ often part of some funeral rites. Either because the dead are said to take a long time until finally, well, consider themselves really dead, or for other, more prosaic reason that Indonesians take it at face value.
To be sure, the only picture related to this unconfirmed story is quite haunting. In fact, when looked at closely, it scares the hell out of anyone. But, and here we go again, it’s the only one, a still that could have easily been manipulated for maximum effect. No matter how long one scrutinizes it, all that it gives away is that, if it’s a hoax, it has an almost cinematic quality. And everybody is on to it.
What’s mesmerizing is not so much that such unsavory beliefs still thrive even when they represent a clear health hazard to whole communities. Neither is the fact that the zombie iconography remains, shall we say, alive and well all over the world.
What really impresses us is how much-wasted talent lies around and how far remote it is from Hollywood, where it’s badly missing. Which leads one to think that, if this is, in fact, an elaborated hoax, the film industry has nothing on the people of Tana Toraja. 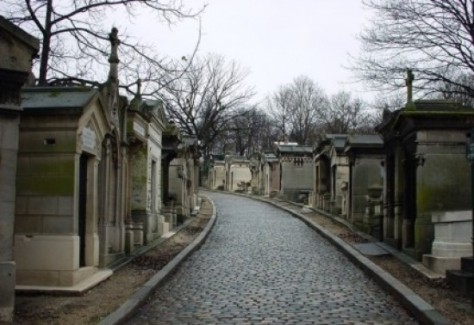 THERE’S A PLACE FOR US
Arguably the world’s most famous cemetery, Père Lachaise opened 216 years ago last May in Paris, established by Napoleon Bonaparte, who, of course, has his own burial place elsewhere in the same city. There are many other older and bigger graveyards around, but none with the sheer number of age-defining personalities, especially those connected to arts and culture.
Americans form the bulk of visitors to the grave of Jim Morrison, for instance, but curiously, are unaware of most of the other celebrities laying there, some of whom predate the leader of The Doors by several centuries. That’s because many famous were transferred there, years after their living years and untimely deaths.
That’s the case, for instance, of Abelard and Heloise, the 12th century doomed couple whose love story may have inspired Shakespeare‘s tragedy about the star-crossed Romeo and Juliet. There are celebrated figures of the French Revolution and victims of many political upheavals, including Communists, Anarchists, and those they fought, collaborationists, Nazi sympathizers, and plain Fascists.
Pretty much all diseased heroes of French literature, arts, music, and film are buried there. And the list of expatriates is also long and distinguished, including Polish Frederic Chopin, Irish Oscar Wilde, Americans Gertrude Stein, and Alice B. Toklas, and German Max Ernst, among many others.
This mix of the famous and the working class, of the deeply French and those who adopted their land and died there, makes the place named after Jesuit priest Père François de la Chaise a site of communion where all arguments cease and only the deceased and their lives are memorialized. Just like any other boneyard above or underground the City of Lights, you may say, but with exceptional star quality to it.
If one day you don’t find us in our usual hangouts, you call our cell and it goes straight to voicemail, perhaps we made it there. Since we’re far from deserving a place in such Pantheon, we may have to dispute our own personal niche with the crows, who can be unforgiven. But we’re not afraid. As we said, we probably won’t give a damn then.