What if future generations would wind up knowing famous people not for what we celebrate them for, but for something entirely unexpected? What if, in the big scheme, that’s what’s all about, or rather, how would you like to be known a century from now?
Michelangelo Buonarroti and Galileo Galilei, whose mastery of arts and sciences summarizes much of mankind’s greatness, may be safe from such a vexing fate. Nevertheless, recent news about them did make us wonder, over 400 years after their time.
In 2014, Illinois-based weapons maker ArmaLite had an awful idea: to outfit Michelangelo‘s masterpiece David with an assault rifle, committing not just an act of vandalism for profit, but also insulting four centuries of enlightenment to transcend our destructive nature.
Almost as offensive to any human who’s ever contemplated in awe the universe, let alone Galileo‘s memory, was a National Science Foundation study, that found that one in four Americans, or some 80 million of us, simply doesn’t know that the Earth orbits the Sun. 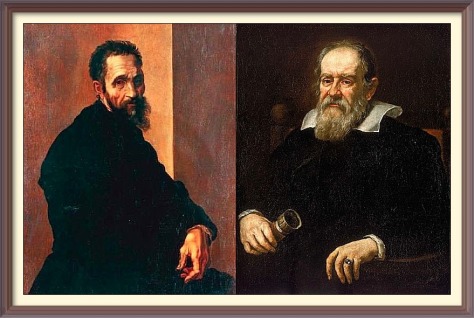 INTERTWINED LEGENDS
It’s very likely that both ArmaLite and those millions of our fellow voters remain unaware that Michelangelo died over 456 years ago, only three days after Galileo was born, both in the same region known today as Italy. Or even what greatness we’re talking about here.
After all, it’s really a coincidence that they were joined by such a happenstance of date and place. But it’s no casual fact that they both defined their age and set the standards to all others that followed it, in ways that still resonate with our world today.
And it’s a bit petty to castigate people for caring little whether Michelangelo‘s art makes us a bit more deserving of the wonders of our own time, or that Galileo‘s telescope introduced us to the stars, from which we inherited the dust that makes up our bodies.
But times, alas, are barely open to wonders, enigmas, or marvels of the physical world. While the Renaissance bred so many geniuses and they, in return, doted us with their indelible foresight and imagination, we got used to ignoring every star above us, as the song goes.
We’re content to juxtapose the sublime with the abhorrent, like David with a gun, and relish on the comfort of long-debunked beliefs, (more)
______
Read Also:
* On This Day
* Renaissance Faire
* F For Fade

like placing Earth at the center of the universe. They may become known for more prosaic things, after all. More on that in a minute.

SCIENCE & THE WAGES OF TRUTH
Before Michelangelo completed the superb 17-foot David statue in Florence, around 1501, he’d already ingratiated himself with the Vatican, with his delicate 69-inch-tall masterpiece, La Pietá, depicting Mary and her dead son, which still attracts crowds to the St. Peter’s Basilica, in Rome.
Besides designing the dome of the basilica itself, Michelangelo wrote poetry, painted and created works of architecture, many completed only after his death. But he’ll be forever associated with the ceiling of the Sistine Chapel, with its majestic multitude of paintings and its centerpiece, The Creation of Adam, a stunning and definitive depiction of the dogma so dear to his rich patrons.
When Michelangelo died, at 88, Galileo was just a baby, but within a half-century, his discoveries would take away the center of gravity of the old master’s age, from its church-sanctioned beliefs to the open-ended quest for scientific knowledge. Despite its most savage efforts, religion was destined to lose the monopoly over wisdom.
Curiously, one of his first inventions was the thermometer, a device definitely focused on life on the planet. But when he directed his gaze at the sky, spotting the craters of the Moon, the phases of Venus, satellites of Jupiter, and the cycle of sunspots, Galileo proved what another genius, Copernicus, had died several years earlier believing: that the Sun, not the Earth was the center of our planetary system.
This is definitely not the right place to explore the implications and the enormity of what Galileo managed to accomplish. Suffice to say that he had to ‘retract’ his findings before his beloved church, lest the Inquisition would be all over his behind in the time it’d take to screw a nail on somebody’s head.
His last years till his death in 1642 were probably the worst time of his life. Even though the interrogations and torture had stopped, he remained ill and under house arrest till the end. Had he lived a bit longer, say, 341 years, he’d have been vindicated: in 1983, the church finally admitted that he was right.

A MEAL & MEMENTO MORI
It’s almost a stretch to picture a world devoid of any reminders of Michelangelo’s art and Galileo’s science. One never knows, though. Fortunately, their works are concrete and stand a better chance of surviving even a nuclear winter, if not only our awareness of them, than many a Renaissance genius.
But in their cases, there’s the extra assurance of learning that two artifacts that belonged to them have also survived: a grocery list by Michelangelo, which is, of course, illustrated, and Galileo’s own finger, or so believed those who embalmed it four centuries ago.
One fine day, Michelangelo found himself in need of some fish (herring, anchovies), pasta (Tortelli), soup (fennel, please), and ‘a small quarter of a rough wine,’ just because. And he dispatched one of his many helpers to fetch those items. Just in case the list was not clear enough, he added little drawings on it too.
That such a mundane but nevertheless personal piece of paper has survived for so long, while possible masterpieces were lost to time is almost freaky. And what can be more intimate and personal than one’s own finger? It was separated from his body almost a hundred years after his death and wound up renaming to Museo Galileo the former Museo Della Storia del la Scienza, in Florence.
That’s the city where both men are also buried. Thus, as they’ve shared an incredibly prolific age, they now partake an eternity too, at the Basilica di San Croce. That their sleep continues to inspire us all.
Now, about that initial question, it’s time to take a few moments to answer it: what would you like us to find out about you in 2114?
__________
(*) Originally published on March, 20, 2014.