Think Getting Married
Is Easy? Ask a Chihuahua

If you ask around, few would be capable of telling why there’s usually a whole month dedicated to weddings, which varies widely according to the country, and doesn’t prevent anyone from marrying any other time of the year. But as senseless that it may be, the tradition is pretty bland, comparing with the thousands of crazy rituals surrounding marriages.
The Internet is full of them, and also of old billionaires marrying teenagers and whole wedding parties winding up locked up in jail, after a bloody brawl. We’ve heard of three particular cases, though, that may have taken the cake, if you’d let us: a brutal nose-drip diet for brides to be; an Indonesian tradition, preventing newlyweds from going to the bathroom; and a dog wedding.
Come again? Somehow, we’re not surprised, for if you really get into the deep end of the issue, you’ll learn some pretty weird, if not downright insane, rituals people submit themselves, or are forced to by their communities, in order to move in together for as long as whatever unites them lasts. Or the local law would allow it.
Weird and unrealistic expectations aside, though, one should never think such exotic preferences are confined to primitive societies, insulated by cultural or political factors or just by plain geography. That would take a whole Wikipedia worth of entries, just to list the ones that have survived thousands of years and still frighten people into follow them.
In fact, apart from the age gap, weddings between decrepit billionaires and babes are a staple of our own rich societies, and in the case of the $4.7 billion-worth nonagenarian Karl Wlaschek, it’s his fifth attempt at END_OF_DOCUMENT_TOKEN_TO_BE_REPLACED 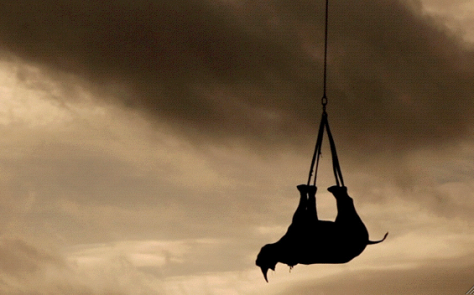 And you thought vegetarians were not aggressive. Tell that to a charging 6.000 pounds angry herbivore. It happens all the time.
In other news, there’s a novel way to relocate rhinos. Hint: it’s off the ground. Is that why elephants get depressed?
What’s about hippopotamuses, rhinoceros and elephants that makes us see them as kindred spirits? Their weight, size and diet? Social organization? Or just our plain ignorance?
Despite all we now know about these three species, they each preserve a certain mysterious quality and intelligence, evident in the ways they interact with each other and with us.
They still fight viciously among themselves in the wild, of course. Still, somehow gentleness is a word generally associated with, at END_OF_DOCUMENT_TOKEN_TO_BE_REPLACED

From Screen Heroes to Public Menace,
a Beloved Dog Breed Faces its Sunset

German shepherds, once considered a perfect symbol of loyal nobility and animal intelligence, now face a disconcerting fall from the public’s grace. But that may be a good thing.
In a recent New York article, author Susan Orlean summarized the breed’s distinguished career at the German cavalry, to which it was created, and popularity in the U.S. generated by the 1950s Rin Tin Tin TV series.
Orlean also noted how the breed suffered the consequences of its early fame, a point central to her book about that canine star brought as a puppy to the U.S. by an American soldier.
Almost as if on cue, word came about the sad story of Emmi, a German shepherd sent back in an one-way Continental Airlines ticket to a kennel in Seattle, by an unsatisfied buyer.
As it turned out, the 80-pound, $7,500 dog, bought END_OF_DOCUMENT_TOKEN_TO_BE_REPLACED

Birds Down Your Pants
& the Frozen Armadillo

Don’t ask us why, but people have been stuffing all sorts of small animals down their pants for years now. They get caught all the time with hairy spiders, rare scorpions, slithering snakes, even live lobsters moving down their legs.
Some kind of genetic freak calling the shots on this one, that’s what we say. But when they start beating each other up with frozen armadillos, well, that’s when we step in and draw the line, for crying out loud.
So smugglers do that for a living. Fine. So two-time crooks do that on a dare, or for dope money. We understand. But even if these deviants show more nerve than noodles, we’re not about to give them a free pass to start pushing us around.
After all, these critters fetch a lot of dough in the black market, and one is never at loss for grifters out for a quick buck. The thing that gets to us, though, is when it gets personal and, instead of throwing a cellphone, as any sophisticated supermodel would, they throw a pet at END_OF_DOCUMENT_TOKEN_TO_BE_REPLACED

Freedom Fighters Catch a Break;
The Internet Is Safe Again for Cats

It was a great, collective effort, the kind of which hadn’t yet been seen before. Most people knew that something should be done about it, but when the conditions were finally right, and it was time to act, there was no hesitation.
In the end, it was a great victory for those of us who believe that it should be our duty to fight the good fight. We’re referring, of course, to the decision by the Israeli legislature last November, to outlaw the declawing of cats.
Now it can be said that it’s once again safe and a birthright to every citizen of the world to enjoy hours of cats frolicking online, without END_OF_DOCUMENT_TOKEN_TO_BE_REPLACED

Perhaps only on the Improbable Research blog you could find two reports that, despite being both about farm animals, couldn’t be more diametrically disparate.
One, about cows and their tendency to emulate each other when eating or lying down. The other, about the brutal and disgusting idea that two farmers had to castrate some lambs with their own teeth.
In other farm news, also covered by the I.R. blog, it turns out that truffles, traditionally found with the help of hogs or dogs, can also be spotted by squirrels.
With the outrageously expensive prices they reach in markets around the world, it’s only natural that connaisseurs will search for ways of finding the buried specialty at the lowest possible cost.
FLYING TRUFFLERS
What pigs, canines and squirrels have in common is, of course, a highly accurate sense of smell. Hogs have been used to find truffles since END_OF_DOCUMENT_TOKEN_TO_BE_REPLACED

Neville Bardos &
All the Wild Horses

Perhaps that’s the kind of news about horses we’ve been longing to hear for quite some time now. For, as only those galloping on the same track know, these have been particularly stablefull of bad news times for equines of all strides.
From corruption and drug overuse at race tracks, to being rounded up and shot in the Middle West and abandoned to starvation in Ireland, horses have been getting it pretty rough lately.
Then, along comes Neville Bardos, an Australian thoroughbred, who’s been twice at the final line but managed to come back and win prizes and hearts in both sides of the pond.
A HORSE WITH A FRIEND
To be sure, this is as much a story about the horse as it is about Boyd Martin, who bought the 7-year old for only $800, off a truck END_OF_DOCUMENT_TOKEN_TO_BE_REPLACED