Frank Sinatra and His Many
Nights & Days Left Inside Us

Frankie was the singer baby boomers loved to hate. But then along came maturity, and the recognition of his maverick spirit, and they finally connected with the Chairman of the Board. By then, he’d already earned the nickname that the so-called Greatest Generation had given him: The Voice.​ Still, he never seemed to care much about that sort of stuff.
That’s part of the allure of Frank Sinatra, who’d be 100 this Saturday: first he grew on the very people who grew up with him. They were enthralled and disgusted, at times sympathetic and repulsed about every one of his ups and downs. And he had many, collected as sobriquets, each marking a distinct moment of his trajectory. And then, he got to you.
The great swinger was a reference point to the popular

music that animated and chastised the many revolutions of the 20th century, with two world wars to boot. He also added a few deep sulks of his own to its history. Like sex, for instance, arguably his greatest contribution as an interpreter, and the differential between his art and that of other crooners of his time.
It permeated his whole carrier, from the screaming teenage girls, anticipating Beatlemania by decades, to the virile enunciation and graceful phrasing of his maturity, to the weariness of his final years of artistic brilliance, in the early thunders of the rock and roll explosion. He faced the decline of his vocal chords prowess with the stoicism of a fallen hero.
As Sinatra progressed towards irrelevance, a man who’d conquered one too many heartbreaks to count, he could no longer understand the primeval beat that had replaced the precise jazz syncopation he used to excel at. The urgency and straightforwardness of rock lyrics offended his American Standards-educated sensibility. Even his political sympathies were out of step with the times. (more)
_______
Read Also:
* The Standards
* 50 Summers
END_OF_DOCUMENT_TOKEN_TO_BE_REPLACED

Songs That Make You Long For
What You’ve Hardly Experienced

For the generation that grew up during the cultural turmoil of the 1960s, a lot of what it was determined to break free from was the placidity, conformity, and political conservatism of the U.S. in the 1950s. The rock’n’roll explosion only made that rupture more visible.
But there was a world that preceded it, marked by two wars, where ideological conflict, social hardship, and technological impact, helped shape a musical tradition that proved itself as one of the greatest cultural achievements of our era: the American Standards.
2015 may turn out to be a landmark year, as milestone anniversaries are bound to shed light on such a rich tradition and its main protagonists. Billie Holiday, Billy Strayhorn, and Frank Sinatra, are just but three of such luminaries who would’ve been 100 this year.
And so would Muddy Waters, Willie Dixon, and Les Paul, all giants on their own, whose association with early country, blues, and jazz insert them, permanently, into the mainstream of American music. But it was the deceptively lowly popular song format what helped usher the Standards into an art form.
To many, the addition of Eastern European Jewish melodies, the Klezmer and other Gipsy traditions, to rhythms and syncopations of African tribal beats, converging for two centuries to the U.S., was what created the two main streams of American music, Blues and Jazz. The Great American Songbook is a worthy heir to those two.
It was also a rare combination of a few generations of extremely talented composers and musicians, with race and immigrant blood running in their veins, that took advantage of a nascent record industry, and offered the perfect antidote to the bleakness and economic despair of the early 1900s in the just industrialized world. 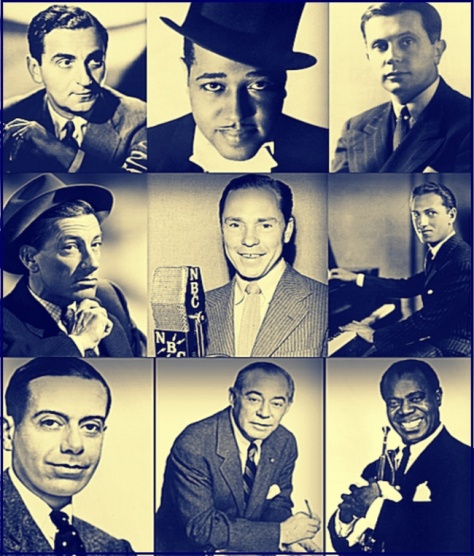 ALT-PORTRAIT OF A WORLD AT WAR
Armed conflicts helped spread that sense of urgency – French songbird Édith Piaf would also be 100 this year – with vaudeville, music hall, variety theater, and a general cultural miscegenation of sorts, all fit snugly into 3-minute songs that encapsulated a badly needed sense of hope for the era.
Even though such gems were not exclusively American, it was in the U.S. that the genre thrived and produced some of the most memorable and enduring melodies and lyrics ever written in English. Then, they were supposed to be about escapism and romance. Now, they can be enjoyed for their distilled wisdom and artistry.
Which is odd, since those Tin Pan Alley composers were working overtime to meet an inflated demand for hits. But what their produced then, under pressure, now betrays none of the rush with which they were writing them at that time; the craftsmanship of some of these songs still has few peers compared with much of those that came after.
The songwriters created an alternative universe, where longing, redemption, and the allure of romance is always within reach, even when they refuse to concede the singer the grace of happiness and fulfillment. At times, the world these songs promise or allude to was the only world worth living for, even if only for a few minutes.

AN ENTIRE NOVEL IN A FEW VERSES
Lovers who wished to be reunited with their dears, warriors whose losses made them cry silently for the first time, common people who saw their world coming apart right in front of their eyes, found comfort in these lyrics that invite them to dance, to dream, and to remain hopeful for another shot at life.
Thankfully, the great majority of American Standards stayed clear of any exacerbated patriotism or xenophobic END_OF_DOCUMENT_TOKEN_TO_BE_REPLACED