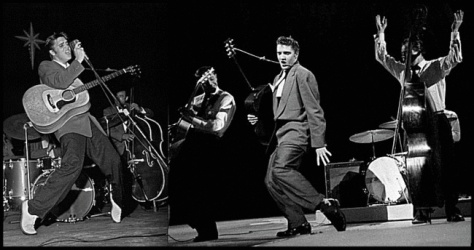 For Elvis at 80,
Immortality Hits

Surviving is not that hard; outlasting your own life is. Elvis Aaron Presley would’ve been 80 today but everybody please calm down: we’re not about to add to the cacophony of essays and tributes that soon will surely shower the world. No one needs our spoon in this stew.
His legacy, however, is chockfull of durability and strength. After almost four decades from his Memphis death, and twice as many years since his birth in Tupelo, both in the heart of the segregated south, someone’s bound to add a spicy pinch of race to the mix of his legend.
People will certainly talk

about his lifelong habit of dying his blond locks, and how his joining the Army in 1958 all but buried the rebellious image of his most brilliant year, 1956, still one of the greatest explosions of raw talent to ever ignite American music and culture, by any standard.
They’ll compare his instinct to step up at the right crossroads of time in the country, combining his boy-next-door

looks with the incendiary fuel of black music, to another master of cross references, born across the pond 68 years ago today too: David Bowie.
Gladys and Vernon, and Priscila, and Lisa Marie, may be mentioned too, possibly even Michael Jackson. The Memphis Mafia, his 1968 Comeback Special, and maybe two fine screen performances, as Pacer Burton, in Flaming Star, and Danny Fisher, in King Creole. Just please not a word about a phony colonel.
They will make valid and absurd points to be corrected by those who were there from the start, while those who came after may wonder what’s with old people and their memory manias. It won’t matter: Elvis will only be 80 today and won’t even care one way or another. But there’s still no expiration date for what he means to the world.
_______
Read Also:
* The Man Behind the King
* A Bow to Bowie
* January 8