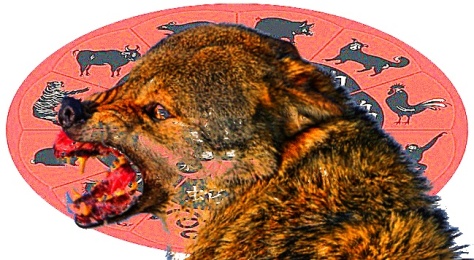 The Banned, the New & the
Obscene, Plus Satan Tweets

On the Chinese calendar, 2018 is the Year of the Dog, which is but another of many ironies we hadn’t really asked for. For there’s no doubt to whom this one’s been gone to. Yet, throughout its mostly painful months, we came through with another appreciation. For the trivial.
Whether for better, worse, or neither the case, is up in the air. Trump’s Orwellian ban on words, a new organ and continent, things we’ve got stuck inside, plus a Tweeter account wittier than the president’s, 2017 had us all gagging. But it could be even worse. Maybe.
Like this just in, breaking news: by closing time, we still haven’t heard from Mary Lee, the East Coast GPS tag-wearing, 16-foot shark, we grew fond of following. She’s missing and our hearts are skipping beats; knowing she was out there (without us) gave us so much solace. Please call home, proud Mary.

Speaking of the Orange-in-Chief, he’s beaten and abused us the whole year, and we ducked and despaired. But while he’s taken credit for the very air we breathe, the puppeteers behind him looked all familiar: they’re doing their usual worst, but, let’s not be coy about it, we know where they all live.
Just saying, not holding our breath about it, as our old Nanny from Kansas used to say. But as we prepare our hour of reckoning, we may count blessings for not having lost our heads, for we’ll be needing them when our ship arrives. By then, hopefully the New Year won’t keep going K-9 on us.

THESE WORDS SHALL NOT BE UTTERED
There hasn’t been precedent of a U.S. presidency being so often compared to 1984, the nightmarish dystopia George Orwell envisioned in his 1948 book, even discounting party-biased assumptions. But a recent Trump administration brief to the country’s top health agency seems to confirm people’s fears.
The words ‘vulnerable,’ ‘entitlement,’ ‘diversity,’ ‘transgender,’ ‘fetus,’ ‘evidence-based’ and ‘science-based,’ are for now on forbidden to be used by the Center for Diseases Control and Prevention, government officials told the agency. Does that imply that, with the new order, you’d better watch what you say?
Enough to send chills down anyone’s spine, isn’t it? Yet, despite such blatant totalitarian ‘edit,’ which follows the redacting of ‘climate change’ from government environmental sites, many are not convinced (more)
_______
Read Also:
* Guilty as Charged
* Downtime
* Haunting Memories