Katrina or When Climate Change
Collided Against the Racial Divide 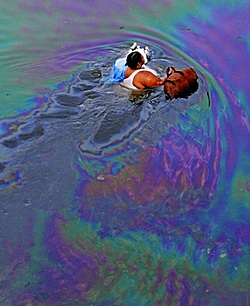 They called for help but it never came. As the nation witnessed entire counties drown on TV, the president refused to cut down his vacations. The storm turned the Big Easy into one of the hardest places on Earth to survive. And a compromised recovery would be short and flawed and unequal.
They promised to rebuild but more than lives, personal belongings, and memorabilia got lost in the flood. Gone was also both New Orleans’ patina of a supposedly racial democracy, and yet another national lame excuse to deny climate change.
As it goes, both were currency during the Bush administration in the immediate post 9/11 era, when his government acquired immense powers to avenge, in a phony cowboy way, the open wounds of American society. Katrina, thus, was far from a ‘natural’ disaster.
The government that sent to the U.N. an honored but misguided black Secretary of State, to justify the Iraq invasion with manufactured evidence, had also promoted an energy policy based on fossil fuels that’s now directly linked to the climate deterioration of the planet.
A policy that, while lining government officials’ pockets, from the VIP down to close allies in the industry and oil-producing countries, has been instrumental for an explosive growth in the destructive power of storms such as Karina, and the wild fires now raging in the West Coast.

WHY THEY WERE LEFT BEHIND
Despite our first black president‘s usual brand of shinning rhetoric and optimism about the future, the state of race relations in this (more)
_______
Read Also:
* New Orleans Remembers