A Brit who wrote the first book in English and an Italian grandmaster; a sailor disguised as a man and a round-the-world biker; a war photographer and the first female in space. Ground-breaking pioneers, these women beat the odds and inspired mankind.
Julian and Artemísia, Hannah and Annie, Dickie and Valentina, forged a new identity for women everywhere, one that’s often been at odds with male-dominated institutions, and that only modern age could fully embrace. These were no tamed spirits.
Along the way, the mastery of intellect and mysticism, of great art and entrepreneurship, became one with what all that came after. Each generation that followed had more of their independence of thought, the courage to report, and dare to reach for the stars.
These were no followers either. What each carved on the fabric of their own age still stands now, be it as a spiritual path or pictorial record, a skill for subversion or example of non-conformity, the capture of the battlefield or a flight into the future.
But only six, you may ask, and why them, instead of, say, the other few billion? Well, shortlists keep things moving: room only for names, times, and the life that defined their accomplishments. Ultimately, though, it’s our choice and we’re running with it.
That won’t settle the argument, but hope for a first female U.S. president got a boost Tuesday, and next week is International Women’s Day. Both fitting brackets for a possible breakthrough year in equality, a battle these women fought and won, so now we know their names.
Great humans create entire epochs around their existence, not always acknowledged in time. Many would enlist their own mothers on this roll. Shortlists help to leave them out, or yours would be certainly here. It also beats having to rewrite so many well-known bios. 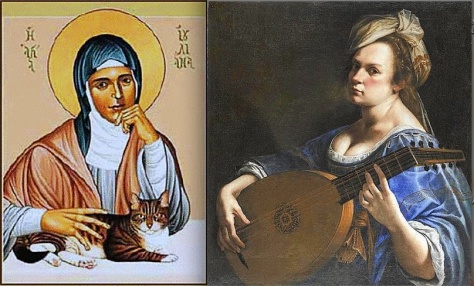 THE MYSTIC WRITER & THE PROTO-FEMINIST PAINTER
On its way to world domination, 14th century England struggled to survive the wreckage of the Dark Ages. The pestilence and ravaging left in its wake were the cause of much soul searching and exacerbated religiosity. Times were ripe for Julian of Norwich.
After surviving illness, she walked out of public life to become a religious recluse, an anchorite, living her remaining years in closed quarters to ‘speak with god’ full time. While others like her burned at a stake, Her Revelations of Divine Love is considered the first female-penned, English-language book.
Two hundred years after, Rome was at the center of the art and religious world, and artists were busy carving their reputations through the glorious Baroque style. Most were male, but Artemisia Gentileschi would defy gender conventions, even as she was long gone when she was recognized as a grandmaster.
Raped by her tutor, who her family successfully sued – not without enormous public shaming of Artemisia, during the trial – she became a rare female working artist whose talent, and tumultuous relationships, equaled that of established painters, such a Caravaggio, with whom she’s often linked.

THE CROSS-DRESSED SAILOR & THE WORLD CYCLIST
There were few options for a woman to sail the world in the 18th century, and to become a soldier of the Royal Marines was hardly one of them. Hanna Snell managed to do both, even as she concealed her gender under the alias James Gray; heaven knows how she survived those long stretches at sea.
Remarkably, her bravery granted her full military pension, and her story, The Female Soldier, made her into a minor celebrity, no small feats for a woman at the time. Till the end, despite three (more)
_______
Read Also:
* Beautiful Bandit
* Women’s Day
* Sunken Ships
END_OF_DOCUMENT_TOKEN_TO_BE_REPLACED

As vacation season in the north hemisphere approaches, many among the lucky are planning what to do and where to go. Some consider a trip to the Caribbean, while others may finally get to visit Uncle Bob who, since he’s moved to Alaska, no one has ever heard from. Gosh, he hasn’t even met the kids yet.
However you plan your time off, though, there are a few famous hangouts you’ll probably never get to sleep at: the Chelsea Hotel, in New York, and the Stanley Hotel, in Colorado, both celebrated in film and song, the Netherlands’ Divorce Hotel, and the fantasy-themed Balade de Gnomes, in Belgium.
The Chelsea Hotel, which is now operated by a chain and has lost much of its gritty appeal, was the home, temporary and permanent, of some of the most influential artists of the 20th century. You probably know the Stanley by its fictional name, the Overlook Hotel, made famous by Stephen King’s novel, and Stanley Kubrick’s movie, The Shinning.
If you think that none of these are appropriate to take the kids, the brainchild of Dutch entrepreneur Jim Halfens is even less so. Advertised END_OF_DOCUMENT_TOKEN_TO_BE_REPLACED