The Stinky Twist of a
Catalan Nativity Scene

A quirky centuries-old tradition is an integral part of every nativity scene worth its hay in parts of Spain. Somewhere behind Mary and Joseph and Baby Jesus himself, there’s the none-too-holy figure of a paesano, relieving himself with not a worry in this world.
The Caganer, a bare-botton icon that originated in Catalonia, is now a familiar sight this time of the year in Portugal and Italy too. And unlike other oh so pious Christmas symbols around the world, it never ceases to draw a little smile from tourists. 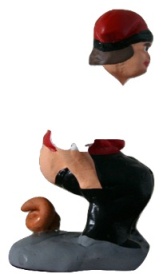 It’s no wonder. Most celebrities – not just Spaniards – have their own, and love it too. President Obama has it. The Pope? Sure. Queen of England? Definitely. And, we suspect, a certain vomit-yellow haired American lout may soon be getting one too.
Artists, politicians and footballers, they all have their own little squatting clay statues, sold in souvenir shops. And those who don’t, well, they may be wondering just why not, or whether there’s something terribly wrong with their agents, right Justin?
You better believe it. Even though, the Caganer may be

a tad too anarchic for the sanitized tastes of contemporary culture. The social and political subtext that the figure came to evoke may be completely lost for mainstream artists and typical crowds of our times.
The Caganer also conveys fertility and good fortune, as insurance for plentiful produce crops for those who keep one at home. That could be the context connecting such a rich, secular tradition to the Christmas lore and its rural tale of a dispossessed boy born in a manger.
Its addition to a Middle-East religious representation is also a throwback to Spain’s Muslim past, but in the form of some kind of social, almost satirical commentary. And as such, the contrast (more)
_______
Read Also:
* St. Nick of Time
END_OF_DOCUMENT_TOKEN_TO_BE_REPLACED